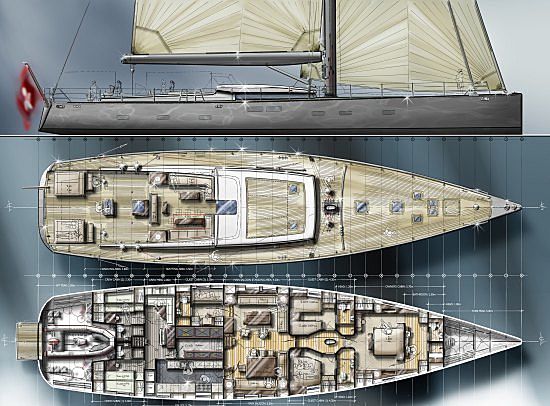 The Mengi Yay 31 metre concept accommodates guests in a four stateroom layout, including a spacious owner’s suite. The addition of an extra cabin for guests as opposed to the usual three cabin layout found on similar length yachts is a response of the Mengi Yay team to client feedback. She will also feature a spacious aft deck area.

The Mengi Yay 40 metre concept will include an impressively large full beam owner’s suite with access to a private terrace as well as swimming platform, offering the owner the ultimate privacy on board. Extra large windows will flood this area with natural light, creating a bright and airy ambiance.

The tender will be stowed beneath the foredeck and is deployed via a pole attached to the mast. An additional 1.5 metre deep storage for deck furniture and water toys will be found in lazarette lockers situated underneath the terrace. She will be powered by engines of 1,200 hp, and will have a cruising speed of 12 knots.

Explaining the design brief given to the studio from the shipyard, Barracuda Yacht Design comments, “The brief insisted upon universal appeal - well-balanced hulls with good looks that would transcend short-term fashion and survive the test of time. These had to be practical designs that could be built in a relatively uncomplicated and cost-conscious way. To this end, we included features such as symmetrical shape rooms – cabins, for example, that could be easily transformed from doubles to twins and back again. Rooms that could be designed built and maintained using common materials, components and fittings etc.”