Silver Arrows Marine, in conjunction with Mercedes-Benz Style, unveiled at the Monaco Yacht Show 2013 the final design and specification of the “Silver Arrow of the seas”.

Bearing many of the hallmark design features of Mercedes-Benz automobiles combined with a radical new approach to luxury motor yacht functionality and aesthetics, the debut yacht is to be called ARROW460-Granturismo. As the order books open, Silver Arrows Marine can confirm the highly contemporary new yacht’s price tag. 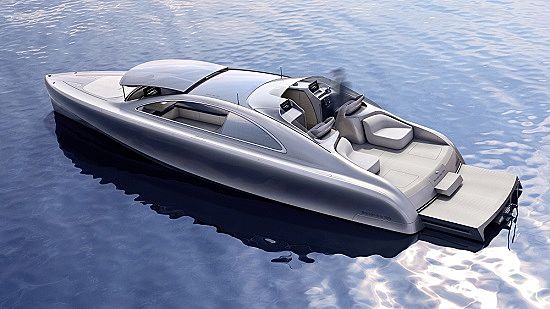 ARROW460-Granturismo will launch initially with an exclusive, limited-edition fully equiped version called Edition 1 which will cost €1.25 million plus VAT, with the first yachts delivered to customers in 2015. Final interior and exterior designs from MercedesBenz Style, along with a two-metre scale model of the finished yacht, were being displayed for the first time at the Monaco Yacht Show.

ARROW460-Granturismo will be powered by two diesel engines developing 353 kW (480hp) each. Cruising speed is around 28 knots with a top speed in light seas of around 40 knots. Performance of the special planing hull developed for ARROW460- Granturismo has been optimized using Computational Fluid Dynamics (CFD) to achieve not just high speeds but all-round comfort along with the highest standards of seaworthiness.