Currently enjoying its last day, this years METS has seen an unprecedented amount of exhibitors from all over the world. Amongst the international attendees is Pacific Aerials, a New Zealand based company whose Pacific Aerials’ Pro Series marine antenna range was the first to feature an easy to remove and remund fibreglass antenna without the need to pull or cut the coaxial cable. 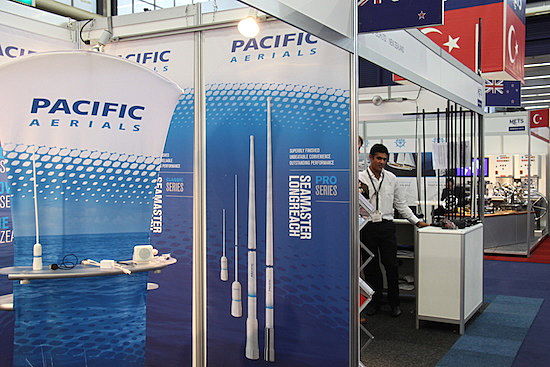 Bringing new products, product refinements and a new catalogue to 2015 to the show this year, SuperYacht Times talked with Managing Director of the company, Colin McMurray, who commented on the changes to the product line on display. He says, “There are a few new products, we’ve got some new black antennas which until now we’ve done upon a custom basis. It’s grown over time and it’s become big enough that we have decided to make that part of our product range, so they’re in the new catalogue. But the changes are mainly cosmetic and actually there’s not much latitude in terms of designing an antenna - you’re restricted by the laws of physics. You’re constrained, but we’ve been making our product range since the 1980s. It’s reliable and successful, so there’s not a lot of reason for us to make too many changes to it.”

In terms of METS, 2014 will be the 14th consecutive show that the brand have been present. McMurray told us about the importance of the annual event to Trudesign, saying, “If there was only one show we were going to do, it would be METS. It’s the biggest show, it’s the best one for us by far in terms of the number of new distributors we’ve got as a direct result of being here, for new business, and we can see out customers from all over the world. We see customers from New Zealand that we don’t see at home, but we see here in Amsterdam!”

Summarising the experience of the show this year, McMurray continues, “This year METS has been very good. Even if we don’t get any more interest today, on the last day of the show, I’ll still go home happy with the enquiries and the new business that we’ve signed up, as well as the prospects we’ve got lined up for 2015.”