Last week at the Hainan Rendezvous Alessandro Falciai and Roberto Zambrini, owners of Mondo Marine, announced that they have invested in the company of Guangfu Zhang, Sease Yachting Co., Ltd. Jointly they will built fiberglass Mondo Marine motor yachts in China. 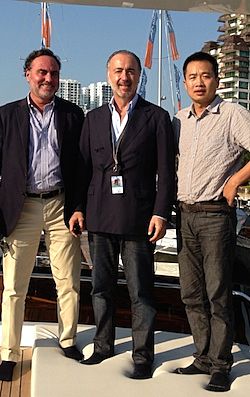 All the Mondo Marine fiberglass boats will be produced in the shipyard of Sease with the support from Mondo Marine Engineering. The first models will have a length of 16.15 metres, 18.90 metres and 26.80 metres.

The news about the investment in the Chinese market follows right after the opening of the company’s new office in Monaco. Alessandro Falciai and Roberto Zambrini believe that Chinese market will be very important for the future, both in smaller yachts and superyachts.

Sease Yachting Co., Ltd is a young and dynamic company, founded in 2007 and based in the Jiangsu province. From the start the aim for Sease was always to produce better and more luxurious crafts year after year. With its know-how of the Chinese market, Sease collaborated with superyacht designers Bill Dixon and Cor D. Rover to develop yachts that meet the needs of Chinese buyers.

The production of the fiberglass yachts with Mondo Marine’s trademark will be completely controlled by Mondo Marine’s engineering team. The existing 53’ and 62’ yachts will be restyled with an Italian touch and Mondo Marine will design a brand new 88’ yacht. The first unit is expected to be completed at the beginning of 2015.