Monte Fino Europe, the European importer for the Monte Fino range of luxury motoryachts, has announced that the first two of its latest models - the upgraded 76 and ecHo 85 – have successfully completed sea trials in the South China Sea. The two yachts have since been loaded for transit and are now on their way to Europe to make their debut at Boot Düsseldorf 2013.

The Monte Fino 76 is a semi-displacement flybridge yacht with four cabins for owner and guests with a fifth aft for crew. The larger ecHo 85 has a total of six cabins and is optimised for low-emission, explorer-style cruising. It is designed to operate in isolated locations in a wide variety of sea conditions. 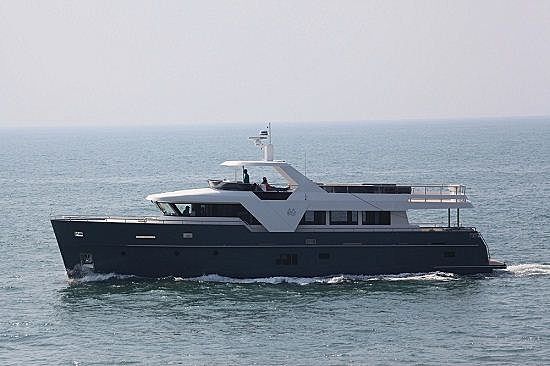 The two yachts demonstrate an unprecedented combination of European technology and design expertise with the Taiwanese work ethic and advanced production techniques. To create luxury craft that appeal to European yachtsmen Kha Shing Yard engaged the services of Rob Humphreys Design from the UK while the interior design is by the Italian Giorgia Drudi, formerly of Ferretti. The interiors of both craft can be fully customised to meet the particular requirements of each owner.

The yachts will be shown to the public for the first time in January 2013 at Boot Düsseldorf.