Moonen Shipyards announced the completion of a major five-month refit of one of its original "pocket-size superyachts," the fifth Moonen 85 Moonshadow Noa (ex Moon Shadow, launched in 1991). 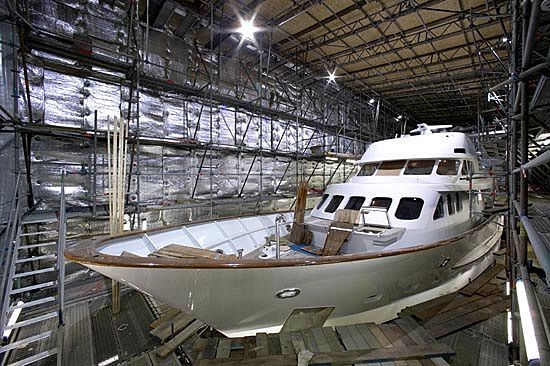 The Moonen 85 was designed by Diana Yachts in the early 1980s, with a graceful flared bow, canoe stern, and classic superstructure. The model is credited with putting Moonen on the world map as a leading quality builder of efficient, comfortable, long-range offshore cruisers. At her launch in 1985, the first Moonen 85, Cassiopeia S, attracted many serious clients; by 1992 the shipyard had delivered five more. In addition to all standard series features, Moon Shadow was outfitted with pioneering touch-screen monitoring, now a standard in the industry. 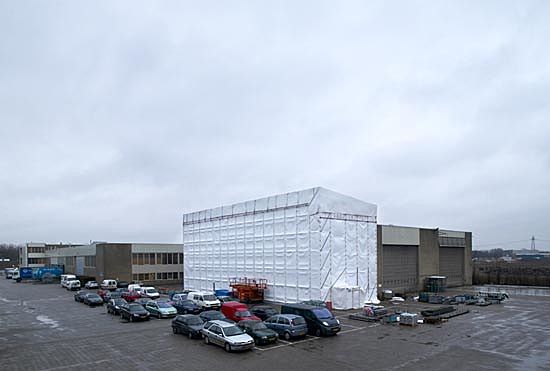 The current owners logically brought Moonshadow Noa to her birthplace for the refit. With the shipyard order book quite full, it was necessary to erect a temporary heated structure adjoining the yard's older hall to complete the work over the winter. (Thus, the parking problem pictured above.)

To begin with, the owners requested a raised extension of the flying bridge, abaft the antenna mast, to create a more private sundeck and protect the original sun lounge. Diana drew the addition in appropriately matching style. Other new exterior features include: all new teak decking and refurbished deck furniture; raised bulwarks, a new fixed canvas bimini, and new computer monitor for the flying bridge; upgraded security cameras; overhauled passerelle and swim platform; new grill and refrigerator; permanent closure of all ports; and new paint including a dark-blue hull inspired by the Moonen 85 Nickeline (ex Gluck Auf). The mast was modified to allow access to the new sundeck and accommodate SatCom and Wi-fi antennas. Below the waterline the stabilizers, shafts and rudder stocks were overhauled.

This is necessarily only a partial list of the changes, upgrades, and replacements Moonen completed. It is interesting to note that, however, that owing to the great loyalty of Moonen's employees, many of the same skilled hands that built Moon Shadow nearly 17 years ago have rebuilt Moonshadow Noa as an essentially new "pocket-size superyacht."