Dutch builder Moonen has announced that its 30.00-metre Moonen 97, Darsea, has been chosen by a select group of superyacht-owning judges as a World Superyacht Award 2009 finalist. The nomination is in the category: “Best Displacement Motor Yacht Of Below 500GT (Approx. 30 m to 49 m).”

Darsea was apparently chosen because she is a prime example of how Moonen teams up with a new client to produce a unique model that also attracts many others. Darsea is an evolutionary design based on the Moonen 84 (Moonen’s most successful series) and the custom Moonen 96 Clementine(launched 2005). 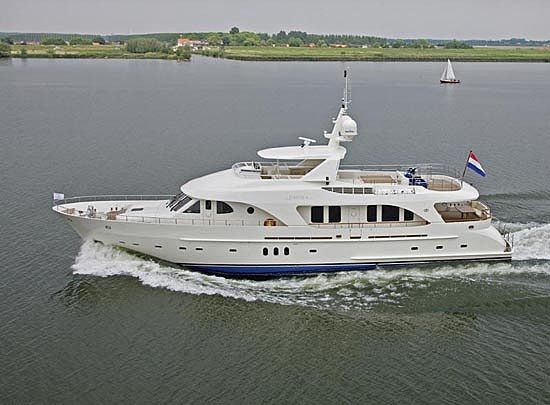 Darsea, with steel hull and aluminium superstructure, is shaped by René van der Velden Yacht Design over a seakindly round-bilge hull by Diana Yacht Design. She has contemporary styling by Art-Line Interiors that features leather, bamboo, wenge, woven suede, and original hand-crafted art, all set against a backdrop fine cherry panelling and furniture. Beyond the pleasurable interior, equal emphasis was placed in Darsea on enjoyment of outdoor living.

Darsea, the first of a new series of Moonen 97 Displacement yachts, is equipped with twin Caterpillar engines, Naiad zero-speed stabilizers, Cramm bow thruster, and is built to Lloyd’s Register Class and MCA Certification.

The World Superyacht Awards will be presented in London’s historic Guildhall on 16 May 2009.