Moonen has announced the launch of the first “99 Alu,” Phoebe, a stretched version of the “94 Alu” in the shipyard’s Semi-Displacement Fast Yacht Series. Phoebe was hauled out of the construction hall in Moonen’s main ’s-Hertogenbosch facility on Saturday 6 June and lowered into the water by Travelift. Turnover to her owners, after sea trials, is set for July 2009. 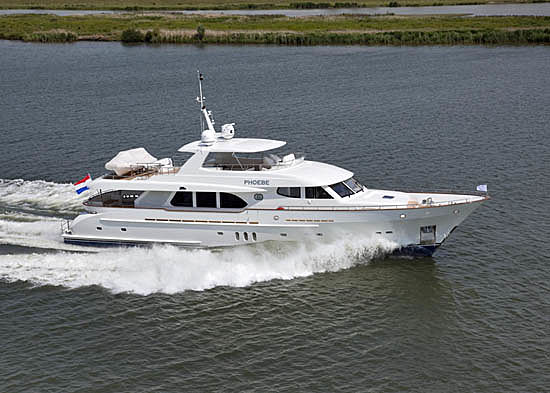 The Moonen 99 Alu is a development of the first Fast Yacht Series, the four-cabin “94 Alu.” Two yachts—Nilo and Infinity, both launched in 2007—introduced the Moonen “94 Alu.” Like all “Alu” yachts, Phoebe is built of Sealium, a lightweight, strong, highly corrosion-resistant aluminium alloy. She has a tank-tested hull and is driven by Servogear Controllable Pitch Propellers set in high-efficiency tunnels. Powered by twin Caterpillar C-32 ACERT diesels, she has a composite-built antenna mast and Bimini top, to save weight aloft and assure her top speed of 26 knots. Phoebe is classed by Bureau Veritas and has MCA certification.

The “99 Alu,” as other recent Moonen models, was styled by René van der Velden Yacht Design over a hullform of Stolk Marimecs naval architecture. Rhoades Young, in cooperation with Moonen, suggested a variation of the interior layout and created the interior styling for the client.

The “99 Alu” has the same superstructure “footprint” as the “94 Alu,” with essentially the same accommodations and engine room areas. The added length was applied to enlarging crew quarters and lengthening the main afterdeck and flying bridge. On the main deck, the saloon is typical of many Moonen yachts, but has a larger adjoining enclosed galley with its own door to the side deck. The wheelhouse centres on a console with engine controls; a plush settee is set aft for guest observation. Stairs lead to the flying bridge and sundeck.

Below, the full-beam master suite has an open plan. Forward, the watertight bulkhead has been moved slightly aft to enlarge the VIP suite. The joinery design by Rhoades Young makes use of a rich walnut with contrasting white-painted surfaces and fabric panel insets.