Supported by Asia Pacific Superyachts Philippines (APS Philippines), the 120 metre vessel Octopus has made one of the most significant WW2 discoveries in recent history. With APS Philippines providing logistical and shore support for the mission, the Lürssen built Octopus was equipped with state of the art equipment, and successfully found the wreck of Japan's biggest warship Musashi in the northern Philippines. 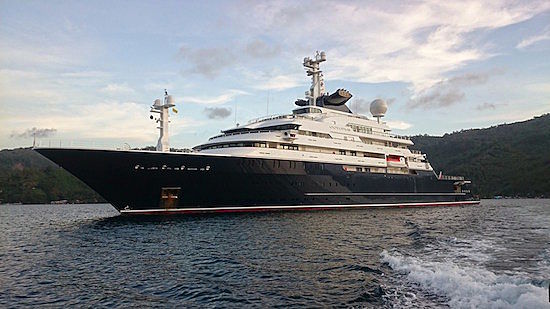 APS Philippines representative Richard Lofthouse comments, "We are thrilled to be able to provide support for the vessel on this mission. There were plenty of logistics involved and our team was tested to the limit; but we were able to meet the challenges. APS Philippines is a relatively new operation so this was a big task. We are thrilled to be part of it and the result is a reflection on the professionalism of the ship and the ground support."

Microsoft co-founder, Paul Allen, staged a live-stream tour of the sunken Japanese battleship as reported by CBS Tokyo which includes a video of “Underwater exploration of the Musashi wreck”. It was further reported debris scattered over a large area at the bottom of the sea in the Philippines indicate that the massive Japanese World War II battleship Musashi was blown into pieces in an undersea explosion 70 years ago.

Experts from a research team analysing a live feed from an unmanned underwater probe Friday said they believe the Musashi suffered at least one explosion while descending in the 3,280.84-foot deep sea. Except for an initial series of partial photos and images of the ship, Friday's more than 2 ½ hour feed was the first detailed imagery showing the current status of the ship.

David Mearns, a marine scientist on the Musashi research team, explains further, “The Musashi sank in October 1944 in the Sibuyan Sea during the battle of Leyte, losing half of its 2,400 crew. It was last seen disappearing into the water in one piece. The wreck is actually very damaged," said. "It appears she suffered at least one, if not two, magazine explosions which would have sheered off the bow and the stern, and its entire middle section of its superstructure."

The research team, sponsored by Microsoft co-founder and entrepreneur Paul Allen, was the first to successfully locate the ship, just ahead of the 70th anniversary of the war's end later this year.