Home > News > More than a drop in the ocean: Can the superyacht industry save our seas?

According to recent estimates, by 2050, the weight of plastic dumped in the ocean will exceed the weight of the fish in the ocean. Over one million seabirds are killed by man-made ocean pollution each year. More than 90% of the world’s coral reefs could be dead by the middle of the century as a result of climate change. And in areas of the Arctic Ocean, the population of polar bears has already decreased by 40% due to global warming. Clearly, the impact which humanity is having on the world’s oceans is cause for concern. 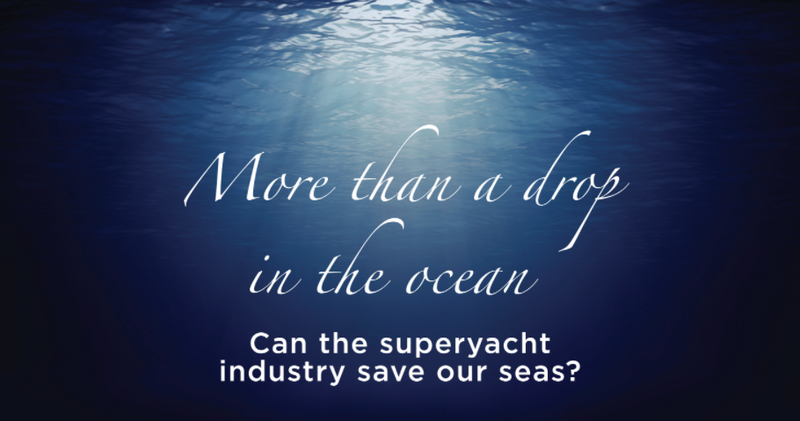 For those who spend their lives enjoying and exploring the oceans, you might expect the desire to help the oceans to be a natural one, but whilst savouring precious vacation time in some of the world’s most beautiful waters, it can be easy to forget the urgency of the situation at hand - or even to misjudge it entirely. Accepting that we need to change our attitude towards the ocean also requires accepting our own potential role in the damage which humans have inflicted upon our marine environment. Everyday actions such as drinking from plastic water bottles - which are later dumped in the ocean - or polluting the environment by burning carbon-based fuels, can have a major impact on the ocean’s health, even if this is not immediately obvious. The time for change is now. 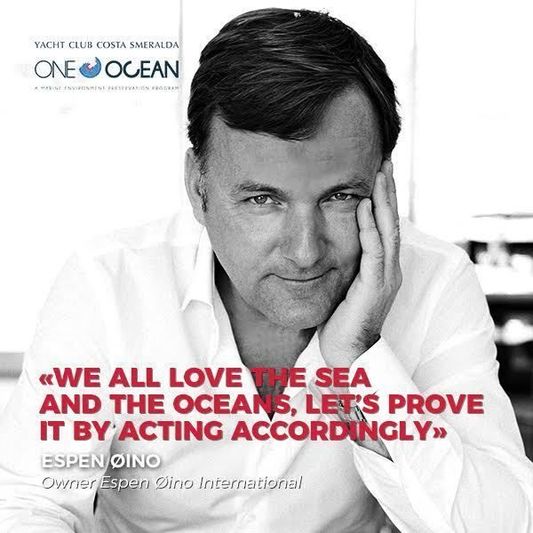 Thankfully, it’s not all doom, gloom and damning facts and figures. Industry-wide, we are beginning to see these first steps being taken. This year, Fraser Yachts announced its partnership with The Plastic Oceans Foundation, a group of organisations which promote the sustainable use of plastics and aims to minimise humans’ adverse impact on the oceans through pollution. The Monaco Yacht Show 2017 also had a distinctly environmental feel, with the brokerage firm Y.CO hosting two breakfast events featuring the skipper and well-known ocean advocate Emily Penn who spoke on the topic of marine plastic pollution, as part of their recent Clearwater environmental initiative.

For brokerage firms such as Fraser and Y.CO, partnering up with environmental campaigns is great publicity and marketing, but this does not mean that these companies are not sincere regarding a desire to do their bit: a desire which is spreading throughout the industry. Indeed, one major environmental initiative to emerge from the superyacht industry this year was the One Ocean Forum, organised by the Yacht Club Costa Smeralda (YCCS) and which made its debut in Milan this October. In collaboration with UNESCO and the University of Bocconi, the One Ocean Forum hosted talks from environmental scientists, ocean eyewitnesses and other organisations in order to raise industry awareness on issues of environmental sustainability, as well as promoting effective actions related to marine conservation. Its advisory board included key players within the superyacht industry, including Espen Øino and Perini Navi’s Edoardo Tabacchi. 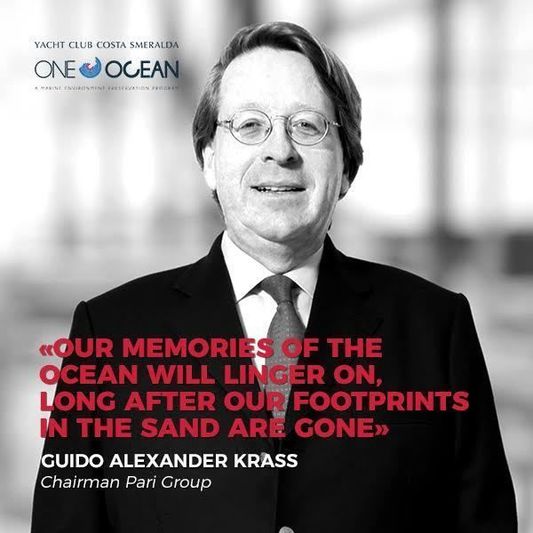 We sat down with the Secretary-General of the YCCS, Jan Pachner and the YCCS Commodore, Riccardo Bonadeo, who are both on the Forum’s founding committee, to find out more about the event, and the Club’s plans to keep the conversation about sustainability going into the future.

SYT:
Why did the YCCS decide to host the One Ocean Forum?

Jan Pachner: This year, the YCCS celebrated its 50th anniversary and so the Board of Directors asked, ‘what can we do to give the Club a different direction? ’ Many different organisations had already presented to us on ocean sustainability, so we thought this would be the perfect occasion to kick off a serious programme about this issue. The view was that we’ve been taking a lot of joy from the sea over the last 50 years, and it’s time to give something back. Our President of the Board of Directors at YCCS, Princess Zahra Aga Khan, is very much involved in these kinds of initiatives. 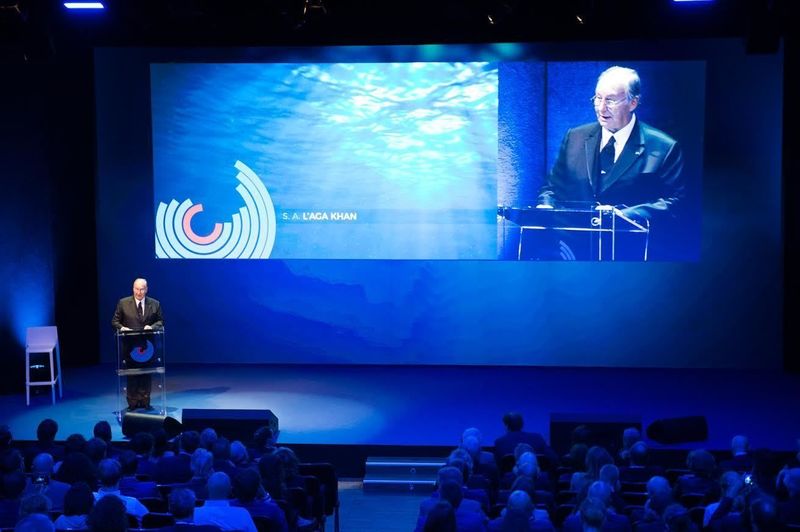 His Highness Prince Karim Aga Khan at the One Ocean Forum

SYT:
How did the first event go?

JP: We had a full house with more than 500 participants. We opted not to charge any fees because we wanted to involve as many people as possible, so the event was fully booked. We also got press coverage on an international level which we didn’t really expect. The encouraging feedback that we received made us aware that we were talking about the right subject: people are ready to listen to these kinds of things now, whereas a couple of years ago it was a bit different. You can see it in the newspapers and on TV, people are starting to become aware of the importance of the sea, although there is still quite a lot of ignorance about it. I’d be surprised if, for example, the average person knows that 50% of oxygen is produced by the sea, everyone just thinks of trees. You have to have a 360-degree view of the environment and our mission is to promote this.

SYT:
As well as scientists, the Forum also included talks from ‘eyewitnesses’ with first-hand experiences of the ocean, such as a sailor, a free diver and an environmental artist. Why?

JP: When you look at climate change, one of the big issues that scientists face is communicating the urgency of this problem to the masses. We developed the ‘eyewitnesses’ idea as a way to get the issues out there in an engaging, and not-overly scientific way because otherwise, it can easily get boring. The eyewitnesses with their individual stories were a very effective way to get the message across.

RB: The other thing that worked very well at the forum was the presence of companies discussing their best practices for the environment: companies that are actually doing something for the oceans, giving them a chance to explain what they are doing. So it worked as an additional amplifier of the message.

SYT:
Is it too late to save the oceans from the environmental damage caused by humans?

JP: If you do nothing, then that’s a pretty passive way to look at the environment, and the damage is going to accelerate even more. For the next generations, we have to do something. It’s depressing that a lot of things that are happening now are probably the result of what happened 40 or 50 years ago… we don’t have a lot of time, that’s for sure. But it’s never too late to save the oceans. We need to build a culture: that’s what it’s about. You can’t build a culture from one day to the next. The reality is that the ocean is going to stay on and it will recover, no matter whether human life stays on or not.

SYT:
How can owners minimise their adverse impact on the ocean in their day-to-day lives?

JP: Superyacht owners have a lot of economic power, so they can have a much bigger influence on the industry when they talk about their own boat and the materials they use. If the owner pushes the industry as well, then obviously, it goes faster, but I think the industry standard is already going that way, more so on the superyachts actually than on the small yachts. However, I think there are a lot of things that can still be done to improve our ‘ocean literacy’ in the industry.

SYT:
What lessons will you take from the Forum and apply to future initiatives?

JP: The main lesson we learned is that we are on the right track and that we will continue to host the forum in the future, probably in around two years’ time. A lot of the partners that we had at the forum are interested in doing something with us again. As a result of the forum’s success, we have also created our new initiative, the One Ocean Foundation, to continue that momentum. Whether you’ve worked with us before or not, if you’re a company interested in playing a role in the foundation, you’re welcome! We will release more information about the Foundation soon.

This article is featured in the latest issue of the SuperYacht Times newspaper. To get your special Innovation Edition, subscribe now to receive your copy straight to your door and never miss another issue.

Inside the latest issue of SuperYacht Times