Mulder Shipyard has announced an order to build a new, all-aluminium Mulder 92 Flybridge for an Egyptian client. This follows on from the recent completion of a Mulder 76 Flybridge for New Zealand, confirming the Dutch yard’s global attraction to connoisseurs of quality. 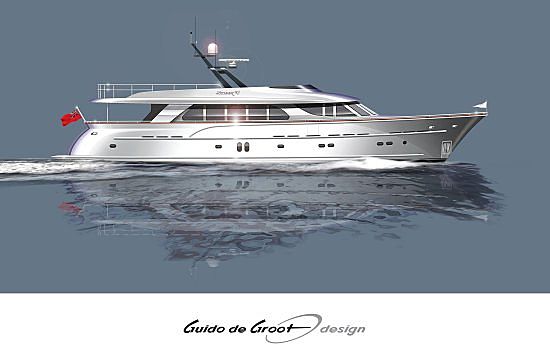 As the older sister of the renowned Mulder 88 Flybridge, Seabreeze II, the new Mulder 92 Flybridge will again be blessed with classic Mulder lines. This new flagship of the Mulder fleet will have a modern interior, finished in premium quality cherry wood with a wealth of light tints. With a scheduled launch date of summer 2008, Mulder has already started work on the hull construction.

The Mulder 92 Flybridge is designed with a round-bilged, semi-planing underwater section. Two 1015 hp Caterpillar engines boost the vessel’s top speed to 18 knots and a cruising speed of 16. A slim nose and sweeping hull lines ensure an exceptional sailing performance in all weather conditions.