The ocean has always been a space of exploration, pleasure and freedom, breathing life into coastal communities worldwide. In the case of the Principality of Monaco and its thriving yachting scene, this is taken one step further, with the world’s capital of yachting inextricably linked to the ocean and all that comes with it since the very beginning. 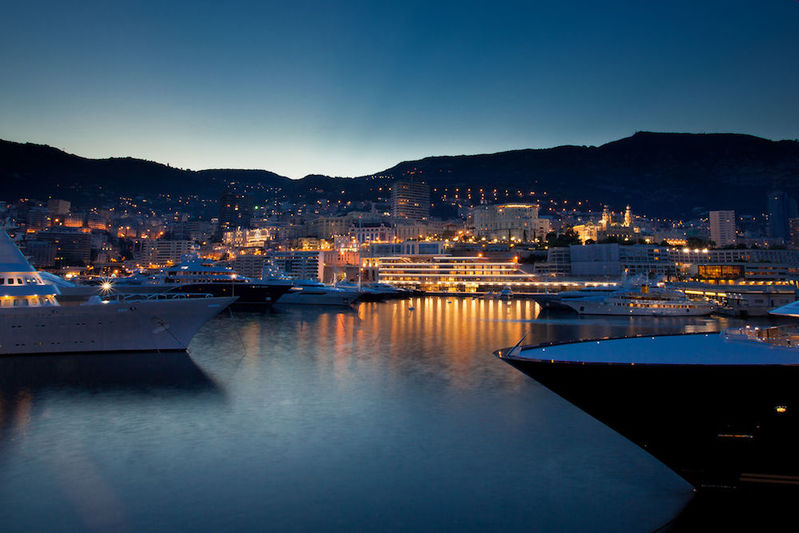 One iconic building in Monaco particularly stands as a testament to this powerful link between the sea and the world’s second smallest nation - the prestigious Yacht Club de Monaco (YCM). With roots dating back to the late 19th century, the Club’s building with its series of stately deck-like terraces is a symbolic centrepiece designed by Sir Norman Foster and frequented by some 1,300 members and run by around 200 staff.

One may be tempted to make the mistake of perceiving the YCM as merely a beautiful ‘closed to the public’ establishment, where its yacht-looking grounds are simply used for those stepping off their yachts to sip extravagant drinks and grab an exquisite bite to eat while overseeing the spectacular coastline. But rooted in this emblematic venue filled to the brim with facilities fit for a King (as this is, according to the man himself, H.S.H. Prince Albert II of Monaco’s second home), is a nautical heritage true to its core. It is a place where education, environmental awareness, exploration, innovation, and a tangible love of sailing reigns first and foremost.

The development of the YCM to its place of prestige can be traced back to as early as 1862, when some of the biggest names in finance, business and entertainment flocked to Monaco to partake in the first sailing regattas held in the bay of Monaco. The closely interlinked relationship between the YCM and the Principality first truly began to flourish at the end of the 19th century, when Monaco’s pivotal location was fast being perceived as an international venue for boating events. 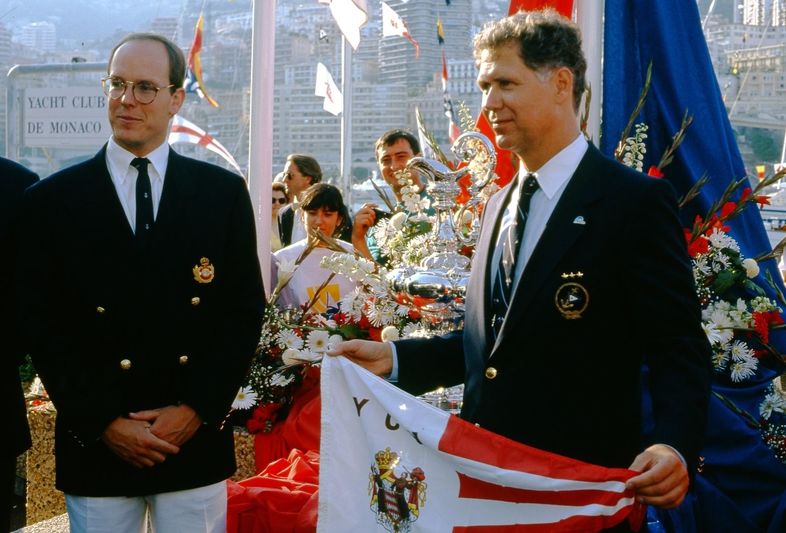 Prince Albert II in 1991 as the America's Cup returns to Monaco - Photo by L. Charry

Riviera-style yachting was, therefore, born from those who longed for the sound of sails whipping against the mistral winds of the Med, wet to the bone, coupled with a satisfied grin on salt crusted lips. This is the very essence of what yachting in Monaco started out as - a place for competitive, passionate sailors to come together and be part of the all-important Société des Régates. Nearly a half a century later in 1953, H.S.H. Prince Rainier III of Monaco officially developed this passion into a more concrete aim: “to develop, encourage, and serve the promotion of the Principality in the yachting sector.”

As the yachting world developed, it was in 1904 that motor yachts arrived on the scene thanks to the development of the internal combustion engine. It was thus that their very first international participation in the races came to be and, well, things would never quite be the same again.

Speaking of the development of pure sailing to the modern day motor yacht monsters that grace the ports of Monaco today, Bernard d’Alessandri, Secretary General and CEO of the YCM, says: “The modern superyachts we welcome to our waters today have the potential to be the classics of tomorrow, which is why the YCM embraces modernity and superyachts, but above all innovation. It is celebrated! At the heart of the Club’s philosophy, the YCM also strives to maintain the long-held values that go back centuries and set seafarers apart from other communities.”

Regardless of its adoption of modern motor yachting, sailing is still at the very core of the YCM. Since its triumphant launch as the YCM we know today in the 50s, the Club has organised an abundance of sea-related initiatives, guaranteeing Monaco’s stronghold as the epicentre of not only innovative, fashionable yachting, but also as a place where sailing as a sport will forever be taken seriously by all. “The reading of the past is a key to the construction of the future,” adds d’Alessandri. 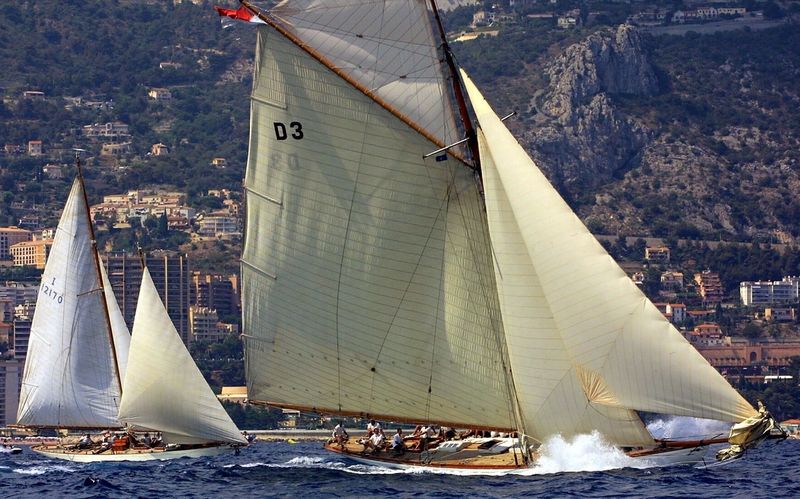 H.S.H. Prince Albert II of Monaco stepped in as President in 1984 and has ensured that the era that followed his accession would reinforce this sporting side, particularly the light sailing section and the generation of brand new yachting-related international events as well as flagships to wave the flag even higher.

Even the special La Belle Classe label, which came into effect in 2005, shows how seriously the YCM and its members take sailing and the essential values associated with it. “Our ‘La Belle Classe’ label and its charter are to encourage not only innovation and respect for the environment but also naval etiquette: solidarity at sea, courtesy, flag etiquette that is of the utmost importance for communication at sea without forgetting tradition,” continues d’Alessandri. “All of these values we want to ensure are passed on to future generations and today’s generation of superyacht owners.”

As for flagships, one of the finest ambassadors, and now quite an elderly madame, is Tuiga. The 28-metre gaff cutter built in 1909 by undisputedly one of the greatest of his era, William Fife III, was bought by H.S.H. Prince Albert II of Monaco in 1995. The acquisition is a testimony to the Principalities continued commitment and its sovereign's passion to classic yachting. Tuiga’s existence is a clear demonstration of an inspiration to keep the past very much alive.

Moreover, the YCM acts as a driving force and facilitator of an all-encompassing economic goal of the Prince’s government. It is clear that the YCM, together with the Principality, share a common mission to make Monaco an all-encompassing yachting capital thanks to its combined initiatives and heritage. 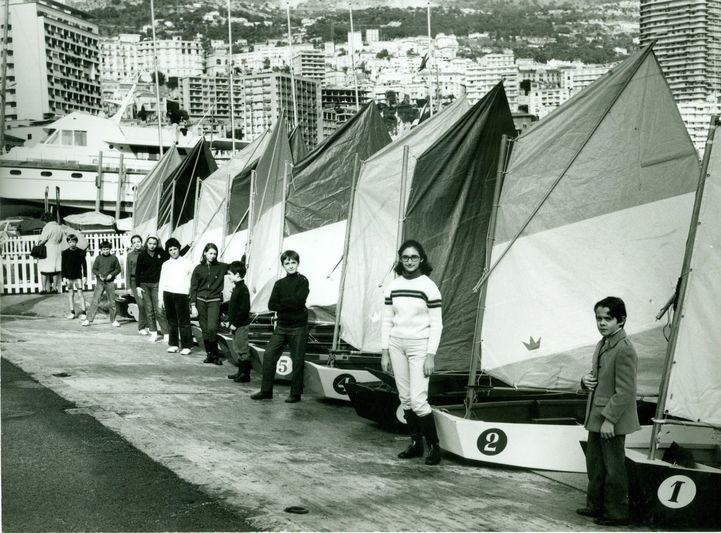 The inauguration of the Ecole de Voile in 1953

Securing its position for years to come, the YCM contributes to the world of yachting with education, environmentally conscious initiatives and innovation. Its premises alone ensure that it has the least impact possible through efficient water, waste and energy management systems installed including photovoltaic solar panels and a hydro-cooling system that recycles water from the port.

Attention is further granted with the likes of the annual Monaco Solar & Electric Boat Challenge, or the Monaco Explorations initiative, as well as the support of a privately owned YCM member’s exhibition flagship, the 77-metre Yersin.

Politically too, Cluster Yachting Monaco, spearheaded by the YCM and land-based yachting companies and supported by the Principalities government, develops the sector to assure a positive experience for all sail or motor yachts entering into the ports of Monaco, while La Belle Classe Academy and Young Professionals in Yachting Monaco cater for a younger generation - the ambassadors, members and safe keepers of the future. 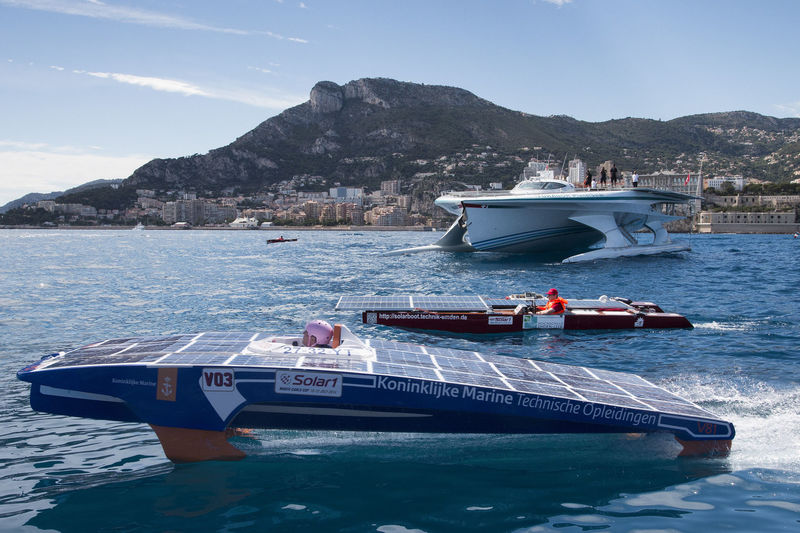 Competing boats in the Solar Cup - Photo by Franck Terlin

To reaffirm the obvious, it is clear that the main instigator to have successfully promoted the link between land, sea and people together with innovation, exploration and education has been the YCM. One thing is certain, classic and modern yachting are here to stay and will sail hand in hand into the sunset for generations to come.