Think you've got what it takes to identify our Mystery Yacht? This year, SYT's revered in-house yacht historian and archivist, Malcolm Wood will be testing your yacht-spotting knowledge to the limit in a series featuring historic yachts selected from his archives that were rarely mentioned or photographed in their day. Here, we give you the solution for the February Mystery Yacht. 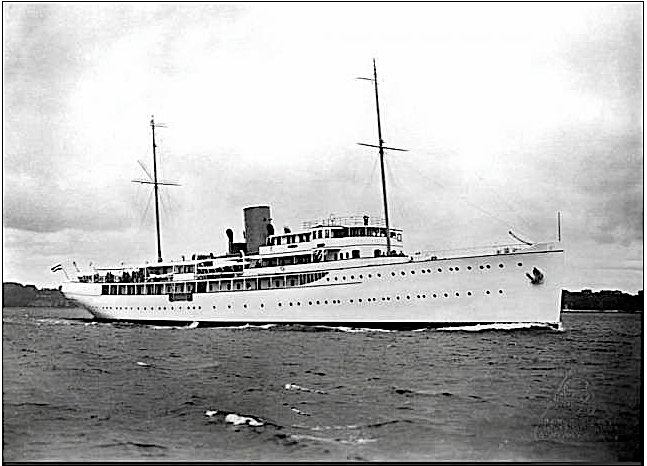 Photo: Malcolm Wood Yachting Archive
The correct answer to the Mystery Yacht in February was Orion, a large motor yacht built in 1929 by the Fr. Krupp Germaniawerft (hull #502) in Kiel, Germany for the German-American wool magnate Julius Forstmann.

Orion measured 101.74-metres in length overall with a beam of 14.26 metres and a draft of 4.89 metres. The hull and superstructure were of steel construction and the decks were teak-sheathed. Twin Krupp diesel engines, each developing 3,600hp (7,200hp total) powered the twin screw yacht to a cruising speed of 15 knots. A crew of over 50 operated Orion, the largest motor yacht of its era with a gross tonnage of 3,097 tons.

Following delivery, the Forstmann family embarked on a round-the-world voyage in 1930 apparently unaffected by the US depression of that year. Julius Forstmann had emigrated to the United States in 1904 at the age of 33 with plans to set up a woollen mill. He established the Forstmann-Huffmann Woolen Mills of Passaic, New Jersey, becoming a leading figure in the industry and also one of the wealthiest. He died at his home in New York in 1939.

Orion was then purchased by the US Navy in 1940 and converted into a gunboat by the Sullivan Drydock & Repair Co. at Brooklyn, New York and sailed in early 1941 under the name Vixen (PG-53). The vessel then served in the US Navy on the east coast and Caribbean until decommissioned in 1946 when Vixen reverted to her original name, Orion. She then operated as a cruise ship in the early post-WWII years.

The vessel was rescued from the scrap yard in 1965 by the Greek ship operator Epirotiki Lines and completely rebuilt at Piraeus and modernised as the luxury cruise ship Argonaut. In 1995 she was sold to Memnon Tours of Cairo, Egypt and renamed Regina Maris cruising the waters of the Red Sea and the Mediterranean. She was laid up at Alexandria, Egypt in the early 2000s prior to being sold for use as a floating hostel at the Summer Olympics in Athens in 2004. Once the games were over, Regina Maris was sold for scrap and was finally broken up at Aliaga in Turkey after a remarkable 75 years in service.