Nautic Air™ today reported that it just completed the installation of its new award-winning air-purification systems on the megayacht MY Lady Joy. In response to the owner’s request, Nautic Air fitted 40 of its air-cleansing units on the 157-foot (47.85-meter) motoryacht in a move to improve air quality beyond the industry standards throughout the vessel. In less than five days, the installations were completed at the Bradford Marina in Davie, Fla. 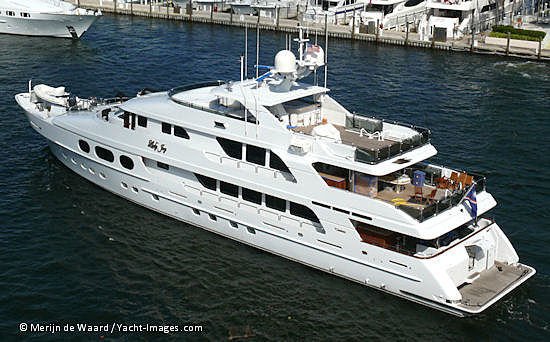 “Due to allergenic sensitivity within the crew and owner’s party, we were asked to fit four test units in the master stateroom suite after interior air-quality measurements by an independent test lab revealed allergenic spores, which are common with closed loop HVAC systems installed on all yachts,” said Heath Schuman, president of Nautic Air. “After the Nautic Air units were installed, a second round of air-quality tests showed the allergenic spore count had reduced to zero. As a result of these tests, the owner asked us to fit Nautic Air throughout the yacht.”

The Nautic Air system uses a proprietary combination of ultraviolet (UV) light and Titanium Dioxide (TiO2) to produce hydroxyl radicals, which reduces mold, bacteria, viruses and other volatile organic compounds in the air. The totally “green” system emits no ozone or other environmentally harmful by-products. In-line modules can be installed quickly and easily into existing HVAC ductwork.

The Nautic Air product was recognized by the National Marine Manufacturers Association as one of the most innovative new products of the year at the International Boatbuilders’ Exhibition (IBEX) in October 2008.

Designed by Christensen Yachts, MY Lady Joy was launched in 2007. The master stateroom suite is on the main deck, and the other six cabins, including two king-size staterooms, are below deck. Located throughout the interior are museum-quality art pieces from the owner’s private collection. The yacht is on charter in the Bahamas, Caribbean and Mediterranean.