Tuesday 14 August 2012 under clear skies and warm sunshine, marked a very special milestone for Nautor’s Swan. When the new Swan 90S, Freya was launched at the Nautor’s Swan facility in Pietarsaari, Finland, she was the 2,000th new Swan built by the team of uniquely talented craftsmen since the conception of the company. With a 46 year history behind them, Nautor’s Swan has delivered 95 different models of Swan – from the first Swan 36 through to the new Swan105. 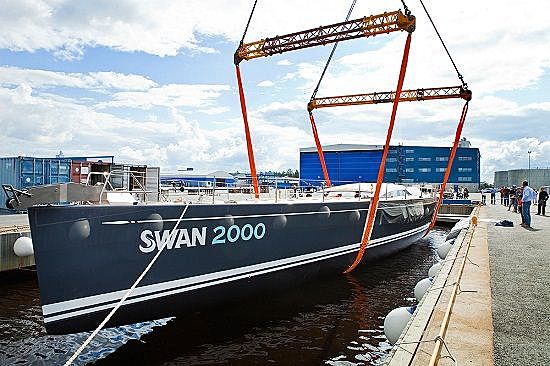 The very first Swan, hull number 1, was the Swan 36-001, Tarantella, designed by Sparkman and Stephens, was delivered to her owner on 17th of July 1967. Still sailing and in perfect condition, Tarantella is now owned by Nautor’s Swan and based at the yard in Pietarsaari.

The second major milestone in the history of Nautor’s Swan was on 15th December 1981 when the first German Frers designed Swan was delivered. Swan 51-012 named Formosa left the yard in freezing conditions bound for the UK. This marked the start of one of the longest partnerships within the marine industry between Nautor’s Swan and German Frers that is still a vital and creative relationship over 30 years on.

After a period where the SwanLine moved from smaller yachts to focusing largely upon the Maxi end of the range with the Swan 60, Swan 66, Swan 80, Swan 90 and Swan 105, Swan number 2.000 is an impressive landmark to have acheived. Freya is due to leave the yard following a month of commisioning on 14 September 2012.

An interesting fact is that if all Swan yachts built to date were lined up there would be almost 96,000 feet of Swans, close to 29.3km which would mean they would form a double line between Kållby, the original location of the Nautor’s Swan - now dedicated to plug & mould fabrication and the lamination of all Swans’ hulls, using one of the most advanced and fully computerized milling machine to perfectly shape the moulds, and the Boat Technology Centre in Pietarsaari where all Swan’s are assembled and launched and the head office is also located.

Enrico Chieffi, Managing Director of Nautor’s Swan commented, “Delivery of the Swan 90S, Freya, marks an incredible achievement for Nautor’s Swan and our team. The Swan 90 is an iconic model within the current SwanLine and it is fitting that the 2,000th Swan delivered should cement it in our history books. With a busy schedule of launches and commissioning ahead of us for the rest of summer, we are looking forward to reaching many more milestones in the years to come.”