Navicomm Marine Systems have recently installed the first KVH TracPhone V7 mini VSAT terminal on a European flagged yacht. The 54m Perini Navi yacht is used extensively for charter and the client wished to provide their guests with a broadband internet solution. Due to the small size and weight of the TracPhone V7, coupled with the fact the vessel is already well equipped with KVH TracVision and TracPhone Fleet products, the V7 was the obvious choice. Released in July, several units have been activated in the US with this being the first system installed on a European vessel. 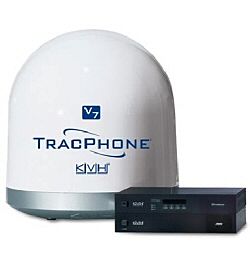 As an experienced Certified Support Provider (CSP) having completed the extensive TracPhone V7 training Navicomm were requested by KVH to provide the installation of the system in Antigua due to our extensive knowledge of the KVH products and systems integration experience.

Utilising a patented spread spectrum technology the V7 antenna is able to be much smaller than previous VSAT antennas therefore also reducing the weight by over 70% (!) compared to existing VSAT solutions. Previously being used by the US military and on business jets the spread spectrum allows the transmitting power to be lower thereby reducing the interference issues with adjacent satellites. This technology combined with CRMA technology, a form of multiplexing, provides the V7 with a better contention ratio over conventional VSAT, meaning there is more capacity for multiple users within the frequency spectrum without experiencing a slow down of the service that other VSAT services suffer from. To the end user this means a service with actual data rates closer to the advertised rates.

Another benefit with the V7 is the seamless roaming between regions. There is currently a service available in Europe, across the North Atlantic shipping route and the US and Caribbean. The V7 system requires no change of hardware or service provider between any of the regions so on arriving in the Caribbean the antenna will automatically acquire the correct satellite based on the internal GPS position.

A flexible choice of service plans are available based on either per megabyte plan or on one of several unlimited plans with a set monthly fee based on the data rate required. The V7 is suitable for normal applications such as emailing and web browsing as well as access to corporate networks and VoIP services which is part of the total systems package. Local access international telephone numbers allow friends, family or clients to call the yacht on a number local to them eliminating expensive international calls and call receiving charges for the vessel.

Peoples hunger for bandwidth, everyday reliance on the internet and email has fuelled a growth for better internet connectivity onboard their yachts. Traditionally, VSAT has been the domain of the larger motor yacht and commercial ships but we believe that with the advent of this smaller, more economical VSAT terminal, the communications market now has more solutions to meet most user’s requirements and budgets.