New Zealand born and bred, Neville Crichton’s humble beginning on a farm on the country’s South Island is a far cry from where he is today, 72 years later. He is the Executive Chairman of one of the largest independent importer and distributor of vehicles in Australia, New Zealand and South Africa - the Ateco Group - an ex-competitive racing driver for a number of prestigious teams around the world including BMW and Ford, an avid yachtsman taking first place on a long list of regattas over the past five decades, and a serial yacht owner. And when I say serial, I mean it. Over the past 50 years, Crichton estimates that he has owned over 50 boats in total - with a sizeable portion of those hailing from the shipyard he founded in the 80s: Alloy Yachts. 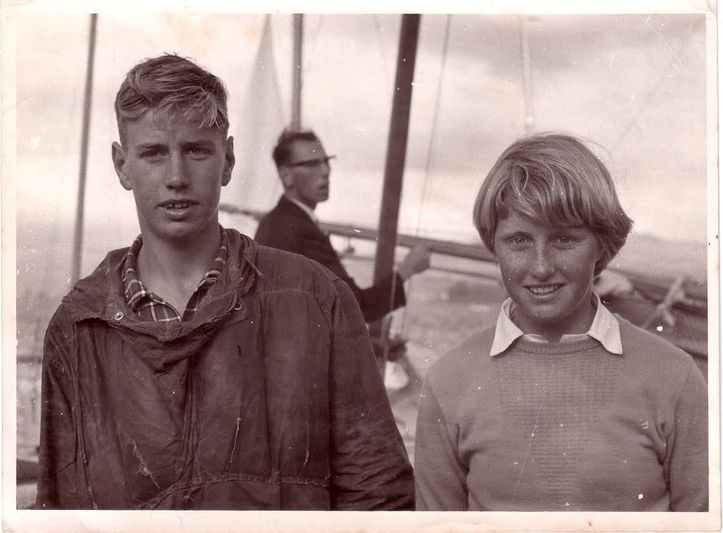 Neville as a boy in New Zealand

It was Crichton’s passion for competitive sailing that led to the birth of Alloy Yachts and, subsequently, the jump-starting of the superyacht industry in New Zealand. Experiencing a sense of dissatisfaction with the sailing yachts on the market (“I just couldn’t find a boat builder that I was confident in being able to do what I wanted them to do,” he remembers) lead Crichton to what would be Alloy Yachts’ first vessel: Chanel. Measuring 28-metres and built to a William Gardner design, the all-aluminium Chanel not only satisfied Crichton’s thirst for the ultimate performance sailing yacht but soon piqued the interest of others, too. “She was sort of the first generation of a more modern look to sailing yachts and was definitely more of the style and performance that I was looking for. I set up Alloy Yachts originally just for my own boat, but the next thing you know is that we have two clients wanting us to build boats for them - and suddenly I’m in the boat building business! At that time nobody had the confidence in New Zealand as a boat builder. I’m proud to say that I had the confidence to take those first steps.” Certainly an impressive feat - and all this from a man who was still making big waves in his full-time job in the automotive industry.

Although stepping away from the yard after a couple of years of thoroughly enjoying his involvement in the design and engineering side of building boats with Alloy Yachts, Crichton’s connection with the yard continued over the years. The eventual demise of the company in 2015 was something that affected Crichton on a personal, professional and patriotic level. “I was so disappointed that they went out of business… they certainly had built some fantastic boats. The blame there was put on the currency issue, but I don’t actually think that’s the case. I truly believe there was still a market for Alloy Yachts, but I think the owners probably made more money selling the business than keeping it running - which I understand of course. But as a very patriotic New Zealander, it was very sad to see the business go. It would be difficult to try and ever get the superyacht business there off the ground again.” 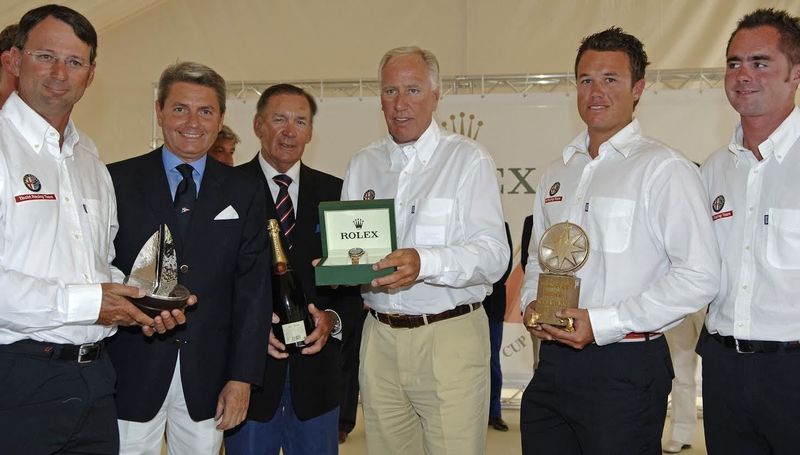 Neville at the Rolex Giraglia Cup, 2009

But, really, I ask? Does the New Zealand boat building industry really have such a small chance of revitalising itself? “Well, the mast industry is very good,” Crichton muses, “and the small fibreglass production boats are quite strong, but the big aluminium or steel boats… I don’t see anybody spending the money to set up a yard again. If it was up to me I would build spec boats and take them to the market one by one - but no one is going to have the patience or the money to do that. It just wouldn’t be practical.” One of the other home-hitting disappointments in the disappearance of Alloy Yachts is the direct effect on the sailing market, especially when considering that, to Crichton at least, the sailing yacht sector was and continues to be, one of the most innovative fields of yachting.

This assertion is focused on performance and technical, rather than aesthetic, developments, and it’s true - in these areas sailing has progressed by leaps and bounds. And, indeed, Crichton himself has been on the forefront of this advancement in a number of these innovations from his Alloy days - a unique position for an owner to be in, and something that probably stems from that real passion for sailing and, of course, from having the financial freedom to invest in that passion. Explaining some of these sailing innovations that may have passed the average motor yacht enthusiast by, Crichton says: “In sailboats certainly we put the first roller-furling boom on a sailing yacht in 1990, and that was probably one of the biggest steps forward within the sailing scene - that and automatic self-planing winches. With that, the reduction in the need for a crew was huge. The innovation of using carbon fibre for a lot of components means that you are also able to build a lighter boat which means you can put smaller gears and smaller sails on the boat to get the same performance. The development of power and hydraulic winches which just require a push of a button to pull the sails out, that is also a significant jump for sailing. Cosmetically, we probably need to re-look at some parts of the boat and reconsider some designs, but as far as development goes… I mean the boats are sailing much, much quicker than they ever have done before and you can build a 45-metre and sail it with five people. Years ago you would have had 20 people on that boat to sail something of that size.” 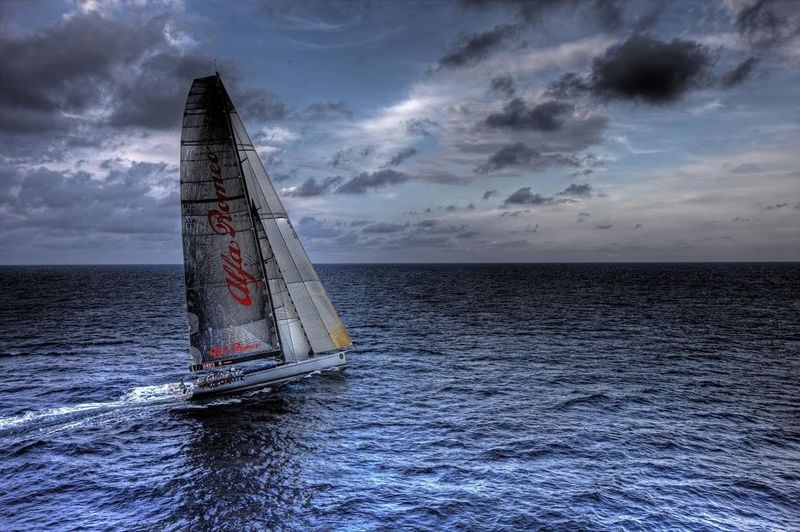 Regardless of this behind-the-scenes level of serious improvements over the years, it is no secret that the sailing industry has been suffering somewhat of a decline in recent years, something in which was certainly was not helped with the loss of legendary designer Ed Dubois - a man whom Crichton himself admires and built many boats with. “Ed Dubois was a fantastic designer, and he was so passionate about promoting not only his own boats but the entire sailing industry. He certainly generated a lot of interest in the industry. So I think that the passing of Ed affected the industry too, but, still, I think the sailing yacht industry has had more innovation put into the mechanical side than the power boats have had.” 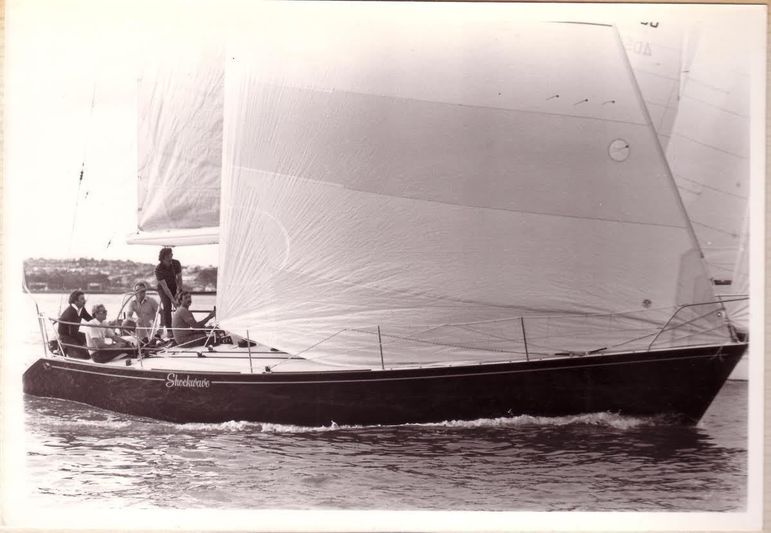 One of Crichton's first yachts, the 14m Shockwave

Although Crichton recognises that aesthetically, it is probably the motor yachts that have undergone - at times - radical transformations over the years, he still notes that this side of the business is the least innovative. Perhaps for the true sailor, a motor yacht just isn’t as exciting as a sailing yacht - a sentiment which you can certainly feel in conversation with Crichton. Regardless, Crichton is, of course, no stranger to motor yachts, using them to follow the world’s most exciting regattas around the world in absolute style, comfort and luxury, as well as to use them to indulge in the very best views available at events such as the Monaco Grand Prix. “I’ve got to say, some of the innovation - they call it - with power boats is changing for the sake of changing and not necessarily for the benefit of the boat. I use my current motor yacht, the 47-metre Heesen-built Como, to follow the regattas around - I really get my kicks out of regattas. I do get pleasure out of owning good things, and that’s a reason why I also own the big power boats.”  But just because motor is not Crichton’s main passion, it doesn’t mean that he doesn’t strive for innovation and the creation of the very best.

The motor yacht that probably most accurately demonstrates this is the 46.22-metre Feadship-built Como (now; Lady May), delivered in 2011. Fulfilling pretty much a lifelong dream to build a Feadship - “If you want to aspire to the best, that’s Feadship in my book,” he says proudly - Crichton pushed the boundaries of what, really, anyone thought was possible with the use of glass in superyacht design, working once again with Dubois to create a truly unique aluminium vessel that ticked all of Crichton’s boxes. Just a couple of highlights include the climate-controlled flybridge, exceptionally large windows in the hull, and the creation of a continuous glass surface by placing the glass in her superstructure on top of the metal as opposed to directly into it, offering impressively uninterrupted views from the master suite. 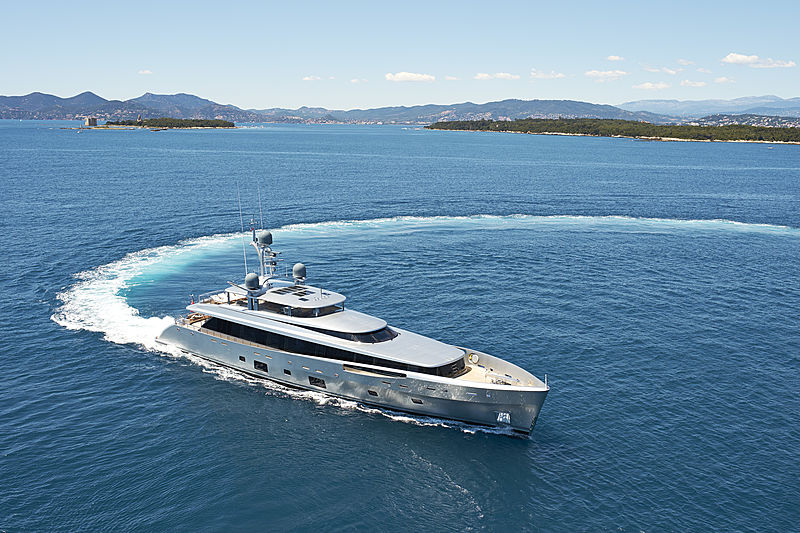 And of course, as the sailor, owner and boat builder, Crichton was a close collaborator with the entire Feadship team throughout her design and construction process, which he clearly still remembers fondly: “I was very proud the day we launched the boat - Como certainly won’t be the last Feadship I will ever build.” Pushing forward and setting new standards, however, wasn’t an easy journey. “We did have to negotiate quite hard with the surveyor and the authorities to get the certification on the glass, and we had to do considerable testing for Lloyds to allow us to have glass surfaces as big as we did on Como. I guess I pushed quite hard, and Feadship did it, they delivered. So from that boat, of course, this kind of utilisation of glass has continued on in other projects as they then knew they could certify large windows. If you look at previous Feadships, the portholes downstairs are tiny, probably 12 x 10 inches, so we opened it up, made it a more enjoyable experience downstairs. The guests want to look out, not down in a dungeon.”

Despite the challenges of certification, the result is something truly spectacular and well worth the investment of energy, and as Crichton states, really kick-started Feadship’s continuation of innovative glass solutions and features on board their custom creations. 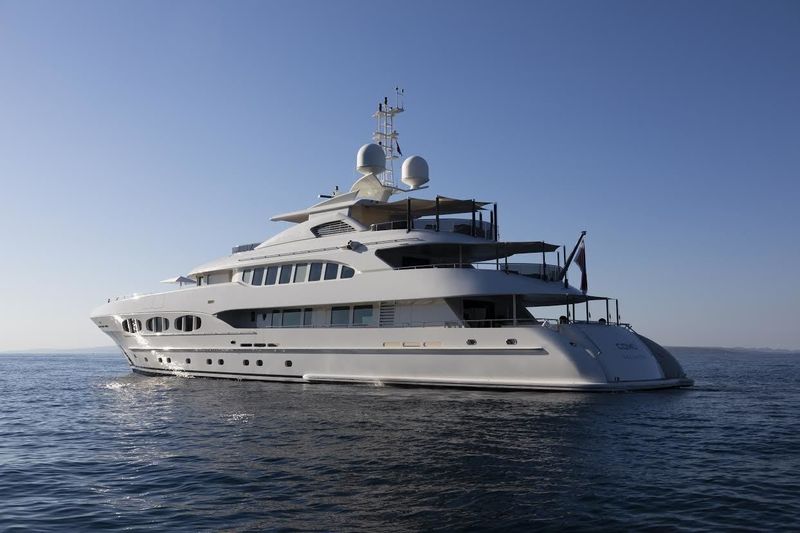 Currently enjoying the Heesen Como which he plans to sell next season after purchasing her in 2017, for Crichton, the next 12 months will be spent figuring out where he wants to build a new superyacht. With plans to build at Feadship again at some point, it will certainly be interesting to see what new innovations come from the mind of Neville Crichton on his next boat. After enjoying what will probably be his last hurrah on the sailing circuit last December at the famed Sydney - Hobart Race (a race in which Crichton has already enjoyed winning - twice), for now, at least, it’s time to unwind… until the next yard is decided, that is.

This article is featured in the latest issue of the SuperYacht Times newspaper. To get your special Innovation Edition, subscribe now  to receive your copy straight to your door and never miss another issue.