The harmonious combination of timeless smooth lines and modern design has resulted in a 200’ retro motor yacht designed by the enthusiastic Vripack team. The careful and refined balance between the ‘old’ and the ‘new’ is provided by the large curves and overhangs. Modern lines and shapes are applied to create this ‘modern classic’. 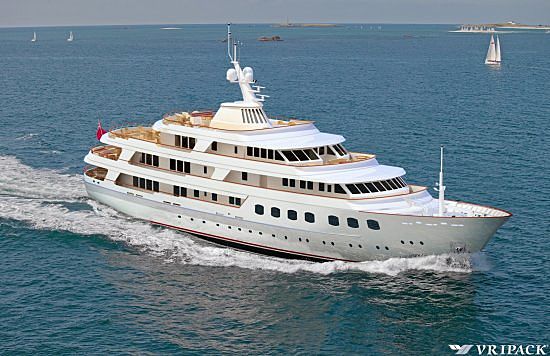 To keep the looks of this five deck motor yacht balanced Vripack’s designers chose elegant sheer lines with a full body hull on the main deck level. Due to her length, a stepped hull was preferred to provide sufficient visual bow height to ‘carry’ the superstructure.

Besides the ten owner and guest staterooms, divided over 295m2 (970ft2) on the lower- and maindeck, another 430m2 (1410ft2) area is reserved for the owner and guests to relax or workout. This includes a dining area for 18 people on the maindeck and a fully equipped fitness area with sauna and a 270 degrees panoramic view on the sundeck. The aft of the sundeck is suitable as a helicopter landing area. The 290m2 (950ft2) crew area is divided over four decks.

From the bridge deck down to the lower deck, an lazy open stair circles around a full glass wall elevator which creates an open and spectacular dynamic appearance in the hart of the yacht. The double deck high engine room is placed at a third from aft ship, leaving enough space for a large lazarette. A top hinged starboard hatch reveals a tender garage which easily holds a 30 ft Boston Whaler and three jet ski’s. All can be launched by two overhead cranes. A nice beach area can be created by lowering a large transom hatch aft. The specific owner’s request, to make sure that there are enough fun and watersport facilities aboard for all ages, has definitely been fulfilled.

The yacht has been designed for an experienced yachting family whose present yacht has become insufficient in size due to their expanding family. Vripack definitely enjoyed the challenge of designing this new yacht as she was not to suffer any loss of character, she had to meet all style demands of early yachting era and last but not least she had to provide more cruising comfort at sea as well as on anchor. Proven by this Design Concept, Vripack has succeeded again.