Feadship revealed its completed 73-metre motor yacht hull 813 for the first time yesterday where the vessel was launched at the Dutch yacht builder’s facility on Kaag Island. Named Hasna, the yacht was custom designed for her experienced Australian owner by RWD. 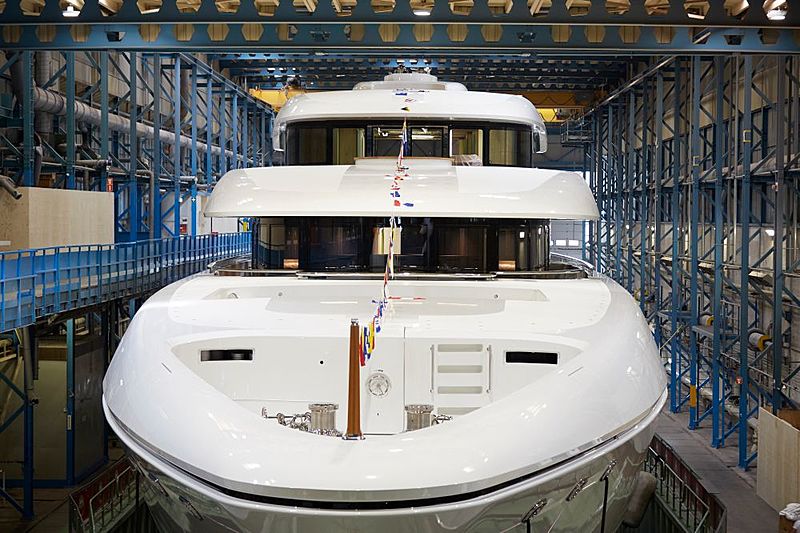 RWD was tasked from the very beginning of the project to design a yacht that would suit the owner’s family lifestyle as well as accommodation needs for 12 guests. To achieve this, the studio focussed on keeping areas very spacious, uncluttered, and easily navigable by guests on board. One such example is the sundeck which, with the inter section’s sliding doors ajar, becomes a 25-metre-long entertainment deck complete with barbeque, three-metre Jacuzzi and sunpads. 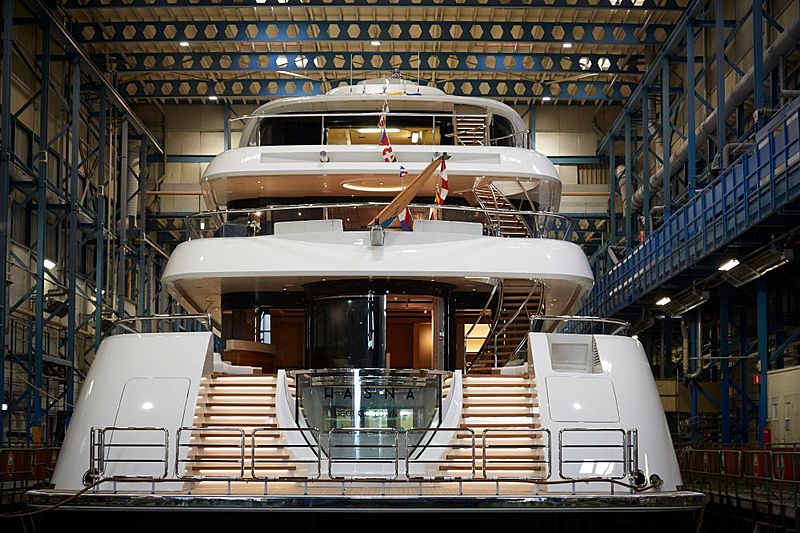 Charlie Baker, project manager at RWD commented: “The brief was to create a timeless exterior profile with lots of subtle details, many of which are inspired by an automotive aesthetic. Hasna’s profile has an understated elegance interrupted by standout features such as the giant swimming pool on the aft deck with its infinity waterfall and curved glass sections. The brief also extended to two beautifully crafted tenders.” 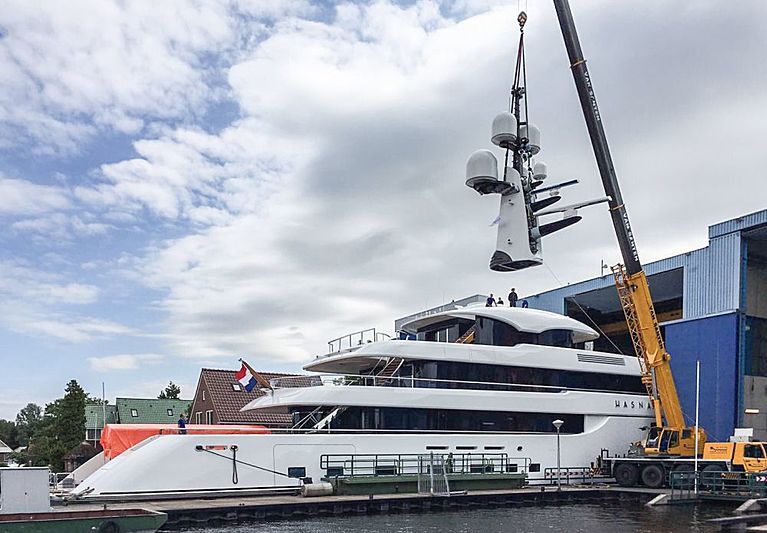 A unique layout feature of Hasna that is uncommon on vessels of her size is the location of the lower deck guest cabins in relation to the engine room. To offer guests direct access to Hasna’s spacious full beam beach deck, the engine room has been moved forward of these cabins leaving an uninterrupted passage to this area of the yacht. Also not located in the very stern of the vessel as what might be expected, the beach deck opens up on either side of the hull via large balcony doors. 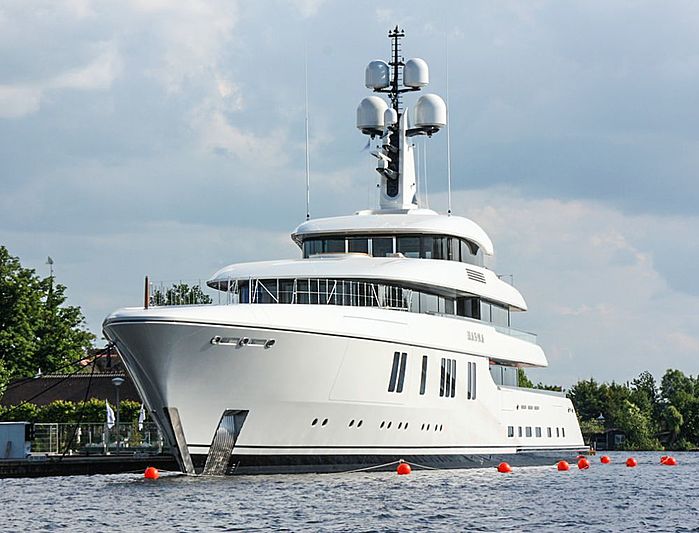 The reason for this special layout becomes clear as one steps onto the main deck and experience the deep sloping swimming pool that stretches eight metres in length. In addition to this stand-out feature, RWD even managed to include a cinema on the main deck without compromising valuable guest space on board. 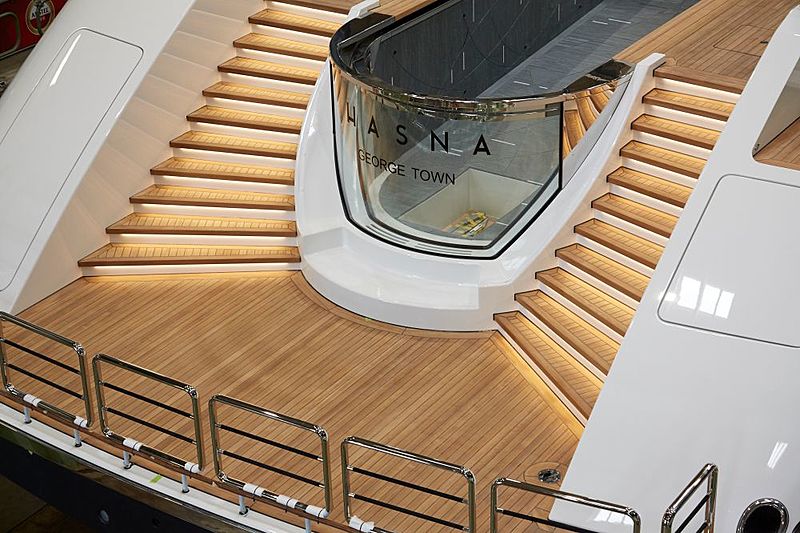 According to RWD’s Head of Interior Design, Jack Canning, the interior spaces matches the elegance of Hasna’s exterior lines. “The interior scheme works in harmony with the exterior living spaces, an honest and natural palette of finishes creates the perfect background for small embellishments of opulent materials and art to stand out from.” 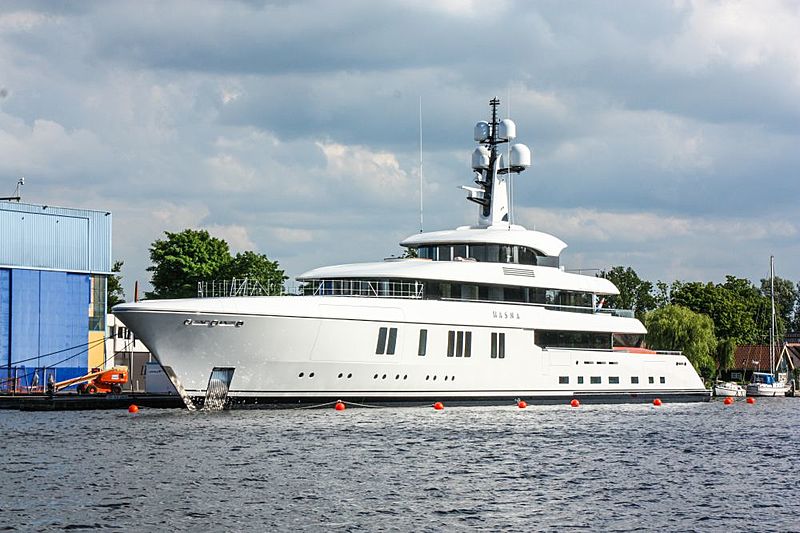 Keeping to the family nature on board, Hasna’s owner requested that crew accommodations and leisure areas are to be larger than theindustry standard and Hasna is even finished with a separate butler’s cabin on board.

“The owner has been visiting boat shows for twenty-plus years leading up to this moment,” concludes Hasna’s captain Steve Barker. “Having owned and chartered other yachts, he ultimately chose Feadship for his first large build based on a conviction that quality and value for money are paramount. He was not disappointed: the craftsmanship and attention to detail is outstanding and a testament to the men and women involved. The owner sees Feadship as the pinnacle of custom yacht building – and my experiences here during the build have confirmed that.”

Photos by Feadship and SYT readers