Nick Mezas Yacht Design has recently revealed their latest superyacht concept, Focus. Measuring 75 metres, she has been designed in collaboration with Van Oossanen Naval Architects and is equipped with a Fast Displacement Hull Form with integrated Vane. 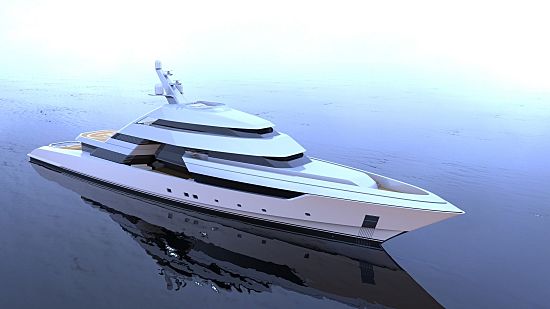 Accommodating ten guests over five spacious cabins as well as a crew of 20, she has been designed with a focus on catering to exclusive events such as weddings, conferences and performances. She has the capacity for one large event spread over three different locations on the vessel as well as for separate events simultaneously. 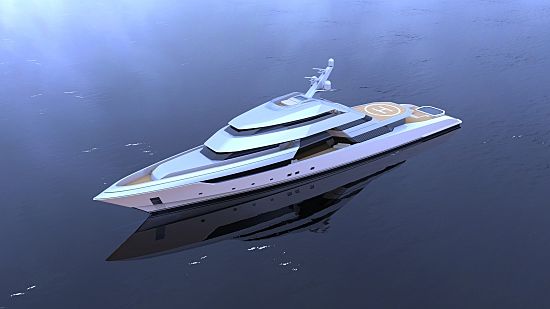 When looking at the profile of the vessel, attention is immediately drawn to the trapezoidal intrusion in the superstructure amidships. Inside is a two-story 150 sqm saloon with side terraces on both port and starboard of 15 sqm each. Entrance to the side terraces is ensured by sliding doors in the huge 5x8 metre two-story glass sides of the saloon. The starboard terrace gives direct access to the sea by means of a fold out platform and side stairs. 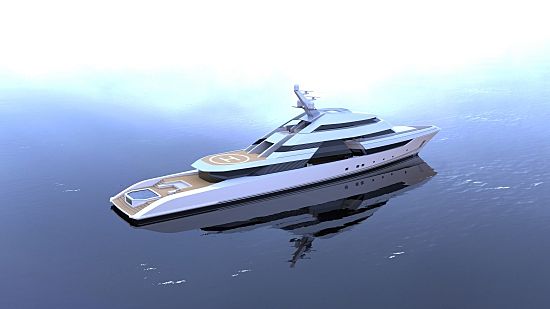 Other features include a helipad, an 80 sqm beach saloon aft on the main deck, a 130 sqm panoramic aft deck over three terraces, a 60 sqm beach club and a tender garage housing two 10 metre tenders as well as other water toys. Equipped with twin MTU 20V4000 M73L engines, she has a top speed of 23.5 knots and a range of 5,000 nm at 15 knots. 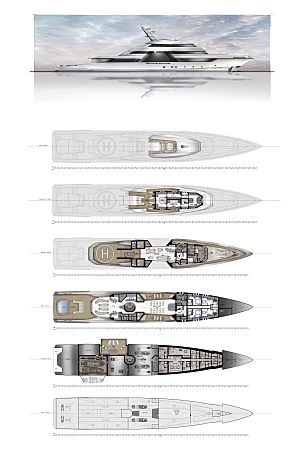 Though she was developed for a prospective client, when the first concept renders were presented in January 2015 the client could not continue the project. The two companies decided to continue with the development regardless. They state, “Strongly believing in the elements of the design, the team continued further work. Some of the conflicting requirements were dropped, and a new purpose for the vessel was created. The design was then brought onto a new level - as an experiment of thought, as well as a subject for reaction from the market to create a broader vision on the purpose of a yacht.”