Azimut Brazil has recently released the following picture of the first Azimut 83, which is being built specifically for the Brazilian market. Measuring 25.2 metres in length, she accommodates guests over four luxurious cabins, including a large master suite which features a whirlpool bath and plenty of space. 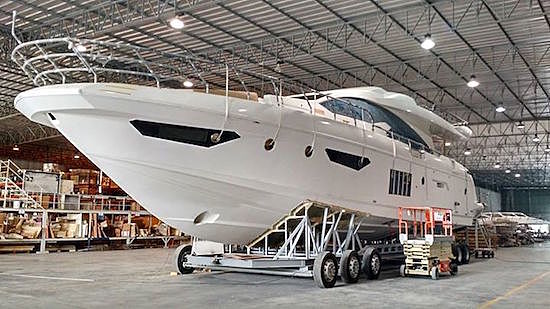 The tri-deck yacht features a 42 sqm flybridge, a new stern area specifically designed to cater to the Brazilian love for barbecue, and a large jacuzzi. Speaking of the addition of the stern, Commercial Director of Azimut Brazil, Francesco Caputo, says, "The Brazilian market appreciates the use of the boat's rear area, which comprises the square stern. The Azimut factory in Brazil added another attractive feature in this area so that customers can fully enjoy the experience aboard in barbecue preparation, which is a national passion."

She is scheduled to be completed in July this year and upon her successful delivery, Azimut Yachts of Brazil will have developed and built three new models in less than a year. CEO Davide Breviglieri comments, "We have grown with regard to the size of the yachts. If we follow this accelerated pace, we are forecast to grow another 35% this boating season. By the 2016/2017 season, we are forecast almost double production.”

Industrial Director Roberto Paião adds that expanding the range of products produced in Brazil was only possible due to skilled labourers, commitment and dedication of the entire group.