The J Class Association is pleased to announce that the name of the new Frank C Paine ‘A’ design yacht will be Atlantis. This yacht has been commissioned for a Dutch owner from original lines plans designed by Frank C Paine in the 1930’s. His J Class designs were never built although drawings for two designs were fully completed at the time. Over the past few months lines plans have been prepared by Andre Hoek Design from these original plans and approved by the JCA.

Frank C Paine was the son of General Charles J Paine of Boston, a three times owner of the successful America’s Cup defenders for the New York Yacht Club, Puritan in 1885 (as part of a syndicate) and later Mayflower (1886) and Volunteer (1887). He was brought up in the world of yachts and was younger brother to an amateur yacht designer John Paine, who had designed Jubilee’for a Boston based syndicate for the 1893 defence when Vigilant had been selected by the New York Yacht Club.

Frank went on to become one of the most important designers during the first half of the twentieth century. He worked alongside designers such as William Starling Burgess, and L Francis Herreshoff (son of Nathanial G Herreshoff) and subsequently was famous for the design of Yankee (originally an R class sloop), which launched in 1930 and was renowned for being fast in a breeze and the beamiest of her contemporaries. Frank C Paine became President of builders George Lawley and Son for many years. He died in 1952.

Atlantis will become yet another step forward in the development of the JCA and experts will be keen to compare potential performance of this design and other new and existing designs. 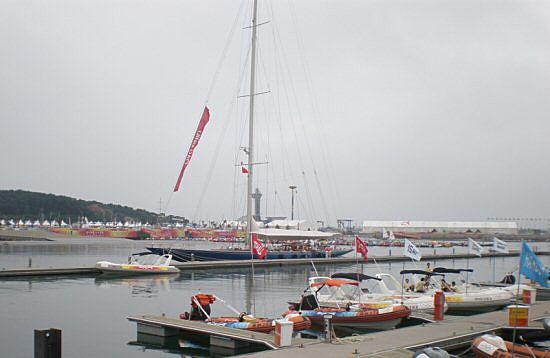 Olympic Games, CHINA
Endeavour is currently visiting the sailing centre at Quindao, China. She is expected to refit before returning to the Northern hemisphere.

Maxi Yacht Rolex Cup
Both Velsheda and Ranger are expected to compete at the Maxi Yacht Rolex Cup, Porto Cervo, Sardinia, 1st to 6th September where the racing through the many islands will again prove a test of nerves for these yachts which draw 4.7 metres (16 feet).