Mulder Shipyard has received a new order to build a Mulder 73 Flybridge for a client from Australia, having previously delivered a yacht to a client in New Zealand two years ago. The all-aluminium yacht is an entirely new design by Guido de Groot and Ginton Naval Architects, and will be delivered in the second quarter of 2012. 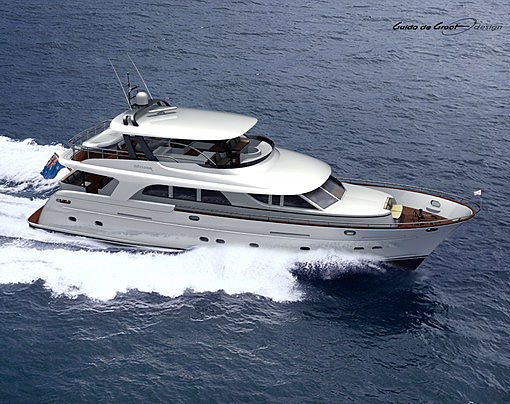 The interior of the Mulder 73 Flybridge will consist of an owner’s stateroom, a VIP suite and a guest cabin, each with their own bathroom. The yacht will also offer spacious quarters for two or three crew members aft. The saloon has a luxury L-shaped sofa and three armchairs. Situated opposite the dining area, the galley is equipped with all the latest equipment and has a door to the gangway. The entire interior will be finished in cherry.

The new Mulder 73 Flybridge is Mulder Shipyard’s second project for the Australasia region. In the spring of 2007 the yard delivered a Mulder 76 Flybridge to a client from New Zealand, which later took part in the Auckland International Boat show. One of the local newspapers, the New Zealand Herald reported that “people are just amazed at the superb condition of this yacht.” With an increasing number of enquires, Mulder Shipyard expects to deliver more projects to Australia and New Zealand in the future.

In addition to these projects, Mulder has various other yachts under construction with delivery dates in the coming years. Despite the recession, the yard has a strong order book that includes eight yachts that have yet to be delivered.