Mulder Shipyard has received a new order to build a Mulder 98 Flybridge for a client from Russia. The all-new, all-aluminium yacht has been developed by the Mulder Shipyard design team and will be delivered in the second quarter of 2013. 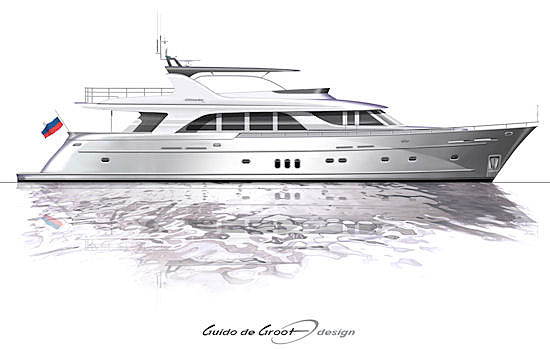 The Flybridge yachts of Mulder Shipyard have been a major international success. The leading Dutch yard delivered a Mulder 98 Flybridge to a client from Egypt in 2010 and recently sold a Mulder 73 Flybridge to an Australian client. The latter had seen the Mulder 76 Flybridge Dutchess at the Auckland yacht show, a yacht that was delivered in 2007 to a client from New Zealand. Meanwhile, Mulder has also built several other projects for clients from Russia, Spain, Germany and Italy.

The new Mulder 98 Flybridge has a length of 30.00 metres over all, and a beam of 6.90 metres. It is powered by twin Caterpillar C32 engines with a capacity of 1600 hp each, offering a maximum speed of 22 knots. The yacht has a fuel capacity of 17,000 litres, which gives it a range of 4,500 nm at a speed of ten knots. The hull will be built in accordance with Lloyd’s classification.

The interior of the new Mulder 98 Flybridge includes a spacious saloon, with a starboard dining area for eight people, The galley on the port side gives direct access to the gangway and a day head. The owner’s stateroom includes a large walk-in closet and three elliptical portholes on both sides. The yacht also has a VIP suite and two guest cabins, each with their own shower and toilet. The interior will be finished in walnut.

The aft ship contains the crew quarters with two twin cabins with a shower and toilet. These quarters can be reached via the swim platform, and give direct access to the engine room. The tender can be stored either on the swim platform or on the flybridge. Additionally, the flybridge is equipped with deck chairs, two roomy U-shaped sofas and a wetbar with grill, icemaker and refrigerator.

The new Mulder 98 Flybridge will be the first yacht to be built at the new facilities of Mulder Shipyard.