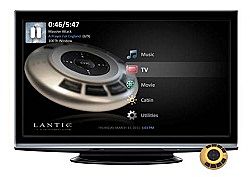 Already well‐known for its use of intuitive, easy to use on‐screen menus, the new software combined with an innovative state‐of‐the‐art graphical design makes navigating a Lantic system even more of a pleasure than it was before.

Accessing content from both onboard central media servers and local inputs such as iPod docks, Blu‐ray players and satellite TV is as fast for first‐time users as it is for experienced Lantic aficionados, and a single touch on the control can give access to the Internet, real‐time navigation feeds, full control of local environmental systems and more. By using software based on a core program supporting plug‐ins, new and updated Lantic Systems can be easily upgraded over time to ensure their ongoing compatibility with new entertainment platforms and standards.

Lantic now offers full control via the iPad, iPhone and iPod, as well as any other device capable of accessing a web browser. With full, two‐way functionality a Lantic system can now both be accessed and controlled from anywhere onboard via a wireless network.