Moonen developed the “94 Alu,” the first model in its new “Fast Yacht Series,” out of the remarkable success of the Moonen 84 (of which eight have been sold since 2001). With its classic lines and popular four-cabin layout, the Moonen 84 inspired several clients to inquire if the shipyard could build a Moonen-quality yacht with similar accommodations, but lighter and capable of significantly higher speed. 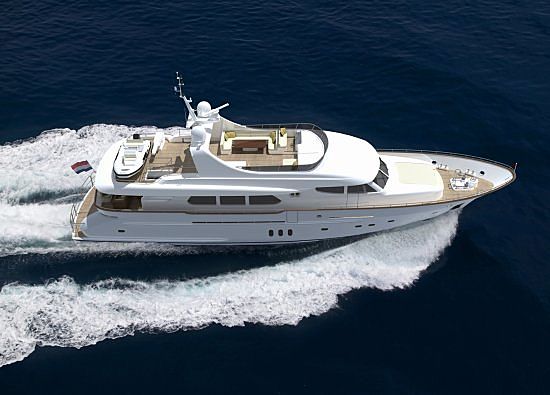 Moonen used the greater length of the “94 Alu” over the original 84-foot design to expand the forward accommodations, extend the swim platform, enlarge the lazarette, and create a longer engine room to include more powerful engines. Nilo, the first “94 Alu,” is powered by the new Caterpillar ACERT High-Performance engines. She is driven by Servogear Controllable-Pitch Propellers running in high-efficiency tunnels, and steered by custom-designed rudders also from Servogear. Tank tests during the design phase indicated a potential top speed of more than 27 knots, though the contract speed for Nilo is 25 knots. (The second “94 Alu” has fixed propellers in tunnels. Both have watertight bulkheads required for MCA compliance, but only the second is MCA certified.)

Moonen’s advanced program of noise and vibration reduction assure silent running at all speeds for Nilo and her future sisters. Moonen is building the entire “Fast Yacht Series” in light, strong, corrosion-resistant Sealium, an aluminum alloy that has achieved wide application in aerospace, shipbuilding, and commercial land construction, and which is conveniently cut, bent, and welded using the same methods as the more common 5083 alloys.

The interior styling of Nilo has been created by Art-Line, which also styled the most recent Moonen 84s. Moonen has under development larger and smaller “Alu” models. A Moonen “99 Alu” an extended version of the “94 Alu” is already on order.