Setting out to develop and create the ultimate ship-like superyacht, unmatched in its long range and independence capabilities, the Sea Hawk is tailored to the owner looking for a no-nonsense superyacht designed on the back of years of experience of an industry captain. But what does it take to develop such a project? SYT meets up with Matthias Bosse, the man behind the innovative new yachting brand Hawk Yachts to find out. 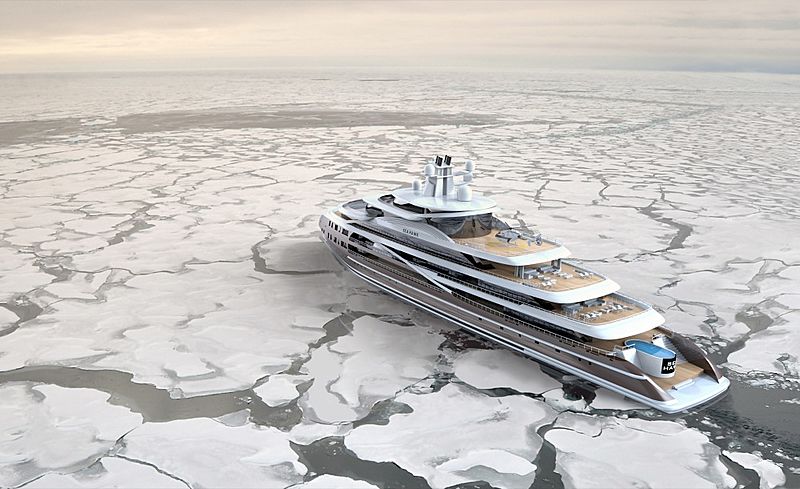 Unveiled to the public at the 2015 Monaco Yacht Show, Sea Hawk is destined to be one of the few yachts truly worthy of the explorer title. With a Polar Ice Class 6 classification, capable of breaking through 800 cm of new ice, and on board systems set up for even the most humid and warmest tropic regions, Sea Hawk’s 12,000 nm range seems to be the only limit to this yacht’s abilities.

Bosse has assembled a team of industry professionals, each proficient in their own field of expertise, to help develop Hawk Yachts. One key player is yet to join the field however. A host of shipyards have been approached with the design, each responding with their own build proposal which is ready to be revealed to interested clients. The ultimate shipyard doesn’t seem to concern to Bosse though, who says Sea Hawk can be constructed where ever the client chooses. “We are not attached to a shipyard, we’ve thought about it, but I think that there should be some flexibility. We’re talking to Blohm+Voss, Lürssen and Kusch Yachts as well. We have contact with many, many shipyards.” Despite the involvement of an outside player such as these shipyards, the yacht, Bosse says, would still be built under the Hawk Yachts brand. 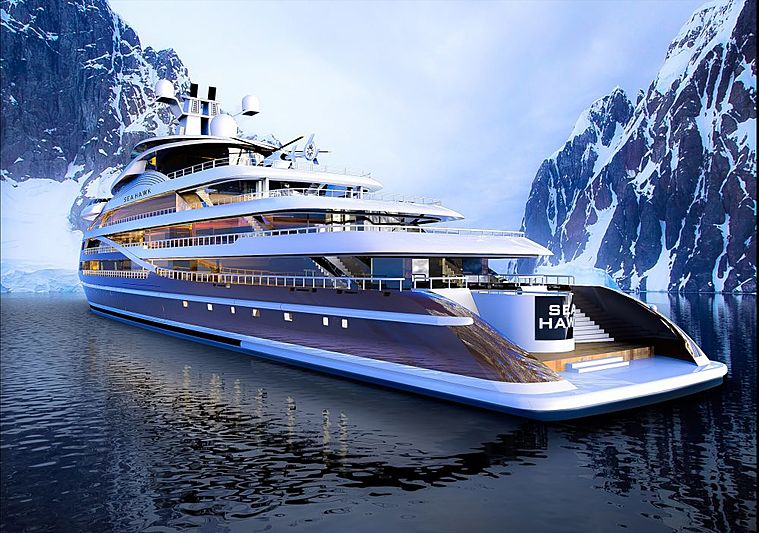 Bosse does however set one requirement for whichever shipyard the project will be constructed at. “There has to be some financial background and stability. The good thing with many shipyards in countries such as Norway or Finland and Italy is that there is financial stability. Of course you can start building a yacht anywhere, but if there is no financial stability, you cannot guarantee that the client will ultimately get what he is paying for.”

The experience of the development team, together with the design studio at Swiss Ocean, who is responsible for the design and naval architecture of the vessel, has taken the project a step beyond the conventional concept of yacht design. “We are more or less in the place of a designer, but instead of purely designing a boat for a client, we are designing a boat for a purpose. So every single detail you see in this design is there for a reason, never only for aesthetics. Everything has a purpose. That’s important for a real explorer, to be functional and to be designed for a purpose. That is what we did.” 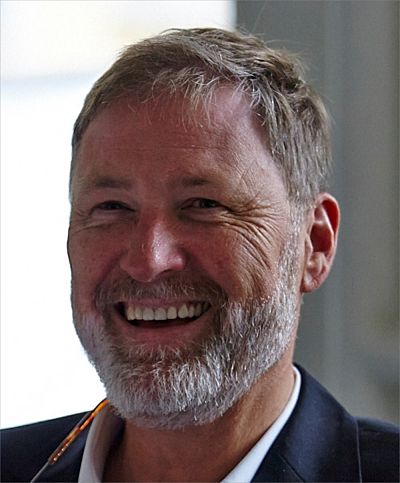 More than a concept, the yacht has been extensively developed, proving that Sea Hawk is not merely a campaign to generate interest, but in fact a feasible project to consider as a new build. “Sea Hawk has been developed and is ready to be built. Tank testing is still outstanding, but everything else has been done. Normally the shipyards would have to do the tank testing again, because they have to give the warranty so it wouldn’t really make sense to do more than what we already have.” All of this means that from signing to delivery, clients will only have to wait three years before cruising on Sea Hawk.

As for potential clients, Bosse lists a number of possible nations which might find Sea Hawk of interest, but identifies a few in particular who the explorer tag could appeal to. “I wouldn’t be surprised if there’s a Middle Eastern client. They’re the next generation of owners, having been raised in England or elsewhere amongst international cultures. Russian clients of course, who are naturally a bit more adventurous. We also had clients from the west coast of the U.S.A. in mind. These ‘tech guys’, they ask all sorts of questions; ‘what would you do’, ‘would you limit yourself?’. They never take anything for granted and they don’t accept everything just because it is what it is.” 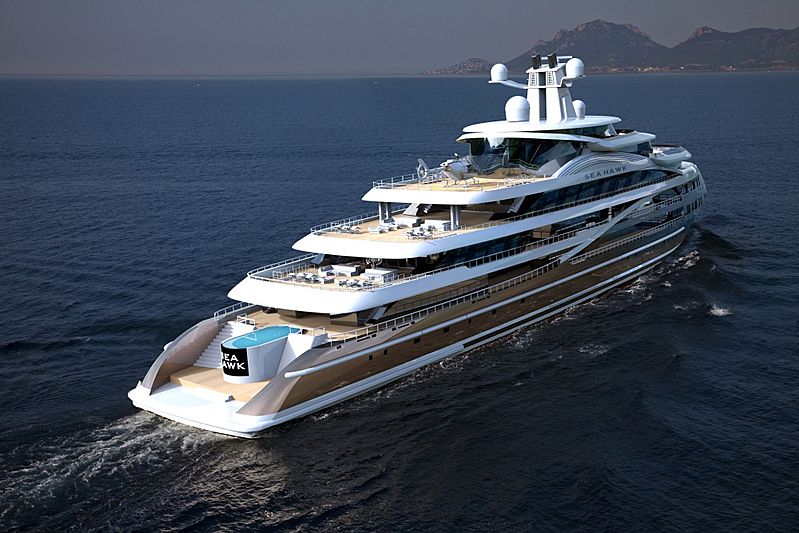 This is where Bosse’s experience as a captain came into play. His background in expedition cruises, luxury cruise liners and as a superyacht captain was invaluable in identifying which features would be a must have on the Hawk Yachts fleet. “There is a lot of money being spent, and ultimately the owner may think he has got a big boat and he can go anywhere, but he cannot. It’s not only the range. It’s so much more. If you have a big boat, let’s say, 2,500 square metres, how many of those are in use? 500 square metres? 1000 at the most. I think this can be the future of the designs, to achieve more with the available space on board. “

This same philosophy applies to the entire Hawk Yachts fleet, which the company is currently developing. “We’re working on a 75 metre and another 55 metre, which will be presented in early 2016.” The 103 metre version is by far the most developed project of the three as Bosse explains: “We went for the biggest one because of our more commercial approach to the project. The idea could well be to offer the vessel as a charter yacht, perhaps not the entire yacht, but as a micro-cruise ship would, where the 18 evenly-sized suites of 70 square metres could each be chartered. For private yachts, you may wish to build a smaller one, which is why we are further developing the line.” 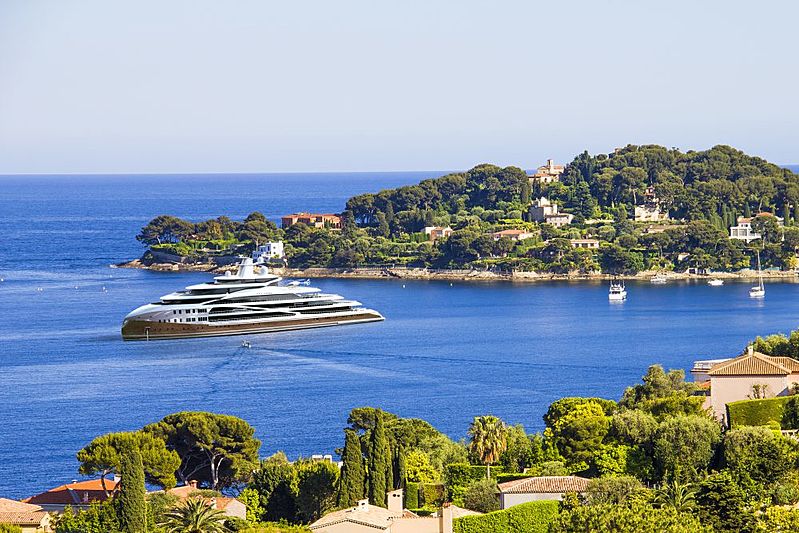 Hawk Yachts is of course not the first yacht brand to present such a revolutionary explorer yacht design to the market. Damen for instance released their new SeaXplorer range of heavy duty world cruisers at the 2015 Monaco Yacht Show. Bosse feels this diversity is a good way for owners to see what is possible today. “If there are more players, then the market will be developed faster. The market, I believe, is big enough for this. I’ve seen other projects, good ones, bad ones; we all have our different approaches. I believe that an explorer yacht still has to be a yacht. Others may think that an explorer yacht has to be a radical design, and capable of doing the hardest stuff, which in my experience, is hardly ever happening. I’m not saying that the Sea Hawk is capable of anything less, but it has to be a yacht and it has to look great in St-Tropez and Monaco. There will be more designs to come, no doubt, and the market will develop.”

When conceptualising the project, Bosse looked far beyond the design, and even further into the future than the build process, and hopes to see himself apart of Sea Hawk long after her launch and delivery stages. “For me, a real explorer project does not end with the build, it continues. You need to know where to go, what to expect, what to organise. If you do worldwide cruising, it’s helpful to have an idea of what to expect, and since I’ve been commercial before, I do possess that experience.” 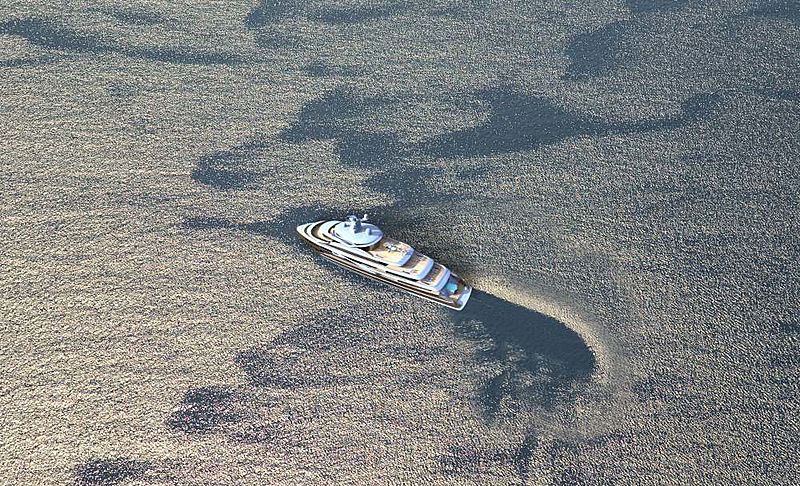 It would seem Bosse is fully committed to the project, not only in the years to follow the launch, but also the time leading up to the signing of the first yacht. The trends of the market are all to familiar to him and, and feels it is merely a matter of time before the interest in Sea Hawk turns into something tangible. “We’ve been working on this project now for around three years. Marketing wise, we haven’t been doing too much yet and only really started promoting it at the Monaco Yacht Show. We believe in this, and I’m totally convinced that this niche will develop further. I think there will be demand from the next generation of owners to do more than what nowadays’ owner’s do. I believe the whole package is an honest one. We are credible."