“To have to create a theme brings a connection to the interior, as if it were a book,” remarks Sander Sinot about his latest gripping story: the 77-metre Black Shark. As the yacht fast approaches her completion date, we are all itching to skip to the ending of this tale.

For the story to be completed, an untold number of man-hours have been invested into making an adventurous owner’s dream come true. Having summoned the industry’s top-tier team of Imperial, Winch Design, Sinot and Nobiskrug, the owner challenged the designers with adopting the hard-hitting shark theme and translating it into the body and soul of a next-generation superyacht. “It’s a matter of how you are able to interpret things, no matter how literally. I think that’s the trick,” says Sinot.

Despite the project being something of an unusual beast, Sinot ensured that the translation of the theme did not go against the grain of his design principles. “A design should not exist just ‘because’ it has been designed. It should be a manifestation of something for purpose, aesthetics and function." 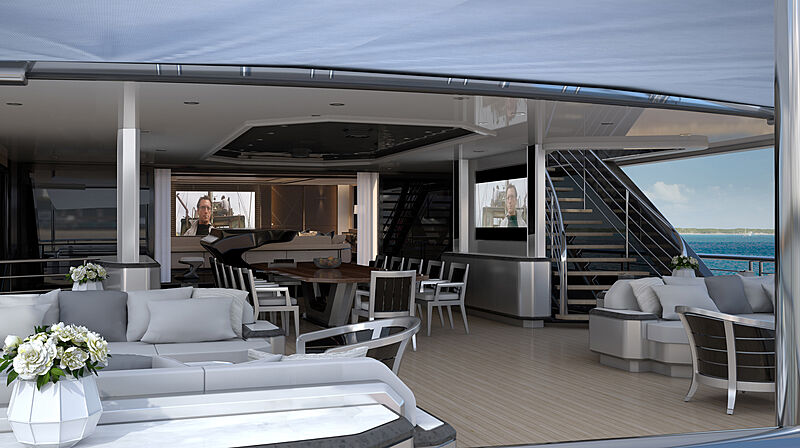 “A yacht is not just an object of wealth: it is something you can use to move across the globe and see things that other people can’t. Superyacht's make you feel good, and the interiors are what makes owners want to welcome people on board and enjoy the surroundings together. It should feel like a safe place to be.” That said, what will manifest itself inside the deep black metallic exterior of the Shark isn’t yet crystal clear. But what we do know is that all those who step on board dive straight into an underwater world awash with examples of the perpetual predator theme. To help us delve deeper into the concept, Senior Designer and Project Manager at Sinot Yacht Architecture & Design, Zlatko Imamovic, answers our questions.

The client is energetic, very interesting and involved. He liked the fact we could use a lot of new technologies in our design such as 3D printing and scanning. It was very clear from the beginning that he wanted to create something unique to correspond to the theme, but still ensure that the spaces are warm, comfortable and inviting. Because of this clear direction, we were able to start creating the interiors in 3D from day one. 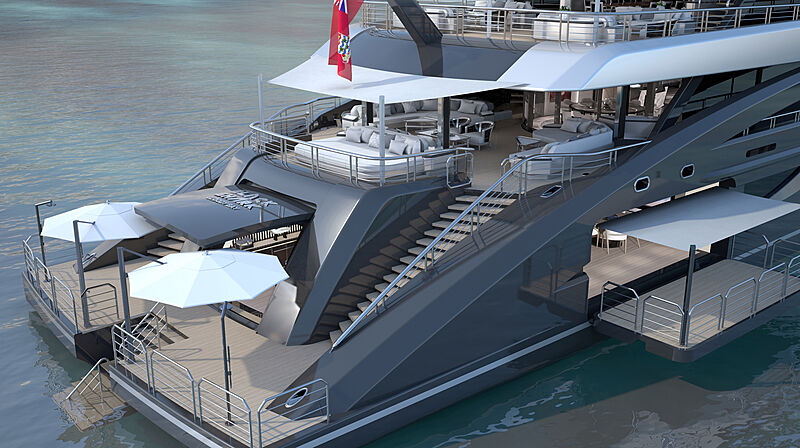 In some of the spaces we have black ceilings, which are quite a bold statement. If you zoom in to the details, it all relates to the theme of ‘black’ or ‘shark’, either together or separately in a subliminal way.

Despite the clear theme, we didn’t want to end up building a theme park inside. You will not see shark fins as door handles, or any other literal translations of the theme. Instead we have added hidden teeth inside the interior, which are not directly noticeable but this is the way we decided to build up the tension inside.

We didn’t know what shark skin looked like until we used a microscope and were able to study its pattern. Their skin is made to reduce the drag on the water with a texture similar to the outside of a golf ball – we translated this into a 3D print and have covered entire walls with this pattern. The outcome is a very interesting tactile texture on the wall. 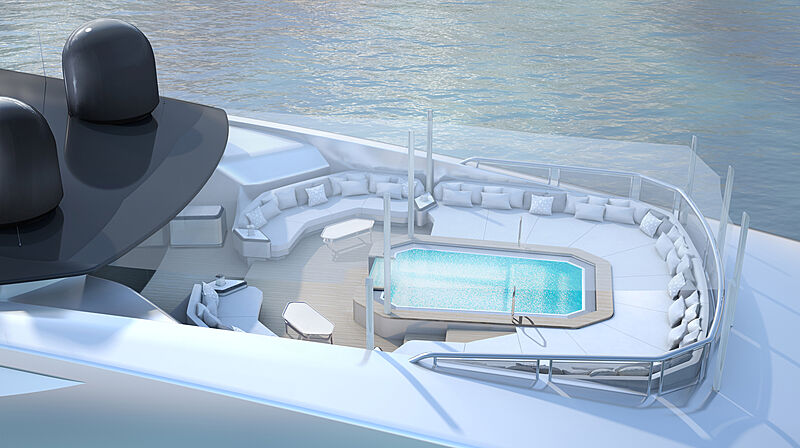 We have told a story throughout the interior with a clear distinction between each deck. This has been divided up to create the perception that, as you move up through the yacht, you are either below the water, on the surface of the water or above the water.

We offered the owner a 360-degree view of the yacht sent to his iPad and a virtual reality (VR) tour. This way, he could click anywhere and walk through Black Shark virtually. Thanks to these new technologies, it only took a few months to complete the interior design. Because of this project, VR mock-ups are now an integral part of our design process.

By the time the keel was laid, we had long finished all the visuals and had made a start on the full-size mockups. We were building four of them in order to see our selection of materials together, which is an important part of our design process. To have a controlled, clean procedure, you need a seal of approval for each step so, in the end, you can ensure the owner will be very satisfied.

We endeavoured to create a comfortable and liveable environment, so needed to be really careful how we translated the idea of the shark. Yes, we have sofas, armchairs and furniture made of nice soft fabrics, but these items are still connected to the overall theme in a way that ties the entire design together in a sophisticated style. This interior is not ‘just an interior,’ there’s a story behind it and relates well to the exterior details, such as Winch Design’s interpretation of the shark gills and fin along the matte black hull.

This article was first featured in The SuperYacht Times Spring Edition newspaper. Subscribe now to receive your copy straight to your door and never miss another issue.