The latest Nordhavn superyacht was recently delivered to her owners in Australia by Pacific Asian Enterprises, Inc. (PAE). Named Karajas, she is the first Nordhavn to be fashioned in an Art Deco theme as per the request of the owners. 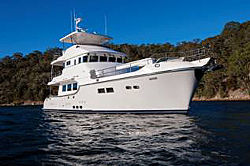 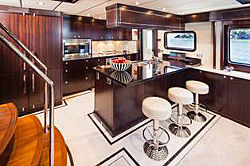 Her interior design is by Scott Cole of the Seattle based design studio, Ardeo Design. Her minimalist look sharply contrasts the traditional style most often associated with trawlers. Recently, however, Nordhavn buyers have been noted to select a more contemporary look. Cole comments, “A Nordhavn may in theory have traditional lines, but it is, in fact, a modern and cutting edge machine. An avante-garde look certainly is not out of place in a Nordhavn.” Speaking of the interior, Cole continues, “Because weight was not an issue in this vessel, we were able to select granite and marble slabs for countertops - not only in the galley and heads, but also for countertops in the salon and staterooms.”

Karajas is also the first Nordhavn 68 APH completed and delivered in Australia. While the majority of Nordhavns are commissioned at one of the company’s U.S. locations, Karajas was shipped to Sydney direct from the Ta Shing factory in Taiwan and finalised there. Nordhavn 68 Project Manager, Justin Zumwalt, comments, “This boat was done on the other side of the world from our Dana Point, California, headquarters and she turned out spectacularly.”

Other ‘firsts’ Karajas employed include being the first N68 to be built to CE specifications, undergoing numerous rigorous sea trials and inspections. She was also fitted with a tailor made fiberglass hardtop over the flybridge, received a customised Victron inverter/charger DC electrical system and is the first N68 to be equipped with the new Tier III compliant motor, a single John Deere 6135 AFM 13.5 litre main engine rated for 425 hp @1900 rpm.