Northrop and Johnson Yachts is pleased to welcome Louis Dvorak to the sales team. Born and raised in Minnesota, Louis Dvorak purchased his first sailboat while working in Washington, DC for his congressman, and was soon spending every weekend and any free time sailing the Chesapeake Bay from Annapolis to the Eastern Shore and all points in between. 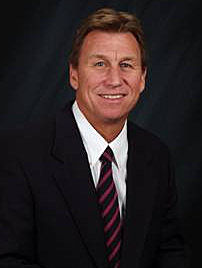 After a few years of working on Capitol Hill, Louis responded to a classified ad by an Annapolis yacht brokerage house looking for a new broker. Although he didn’t have any experience selling boats, he convinced the owner to give him a job based on his avid interest in sailing and his strong desire to avoid returning to any more Minnesota winters.

“It was all about sailboats,” Louis explained, “that’s all we sold and they weren’t very big deals so you had to really sell a lot of them to make any money. It was a drive-in market - basically those clients within driving distance showed up on the weekends and you only had a few hours to find them a boat before they drove back home. It was a really fun challenge.”

Annapolis proved to be a great training ground for Louis and he soon found himself at the Ft. Lauderdale Boat Show displaying a 41 Defever. “It was our first venture into power boats and we had done gangbuster business at the Annapolis Power Boat Show, so we figured we would go to Ft. Lauderdale and show them how it was done,” said Louis.

“Needless to say, even back then, we were dwarfed by all of the big boys at the show and all but ignored by the show goers in general. But I personally had a great time and made a contact which redirected my whole lifestyle and idea of selling boats,” Louis recalled.

“I met Gary Oviatt who had just left Woods & Oviatt, one of the largest Florida brokerage houses at the time, and he told me two things that changed my fledgling career. Number one, in case I hadn’t noticed, the big boats were in South Florida and number two, I could become a big time, rich and famous yacht broker if I just went to work for him.”

Although the jury is still out on the latter, Louis did go to work for Oviatt selling both new and brokerage power boats and soon became Oviatt’s number one sales person. “We started out with the Defever line and then Gary starting building the new Alaskan motor yachts that became quite popular with the owner/operator cruising couples.”

After many years of selling Alaskans and similar cruising yachts, Louis began looking toward a new challenge. “The idea of selling crewed yachts and moving into the bigger international yacht market is something I’ve been looking at for the last couple years,” Louis explained. “So when Kevin Merrigan offered me an opportunity to join Northrop and Johnson, I didn’t hesitate. It’s an honor to join a brokerage house with the history and integrity of Northrop and Johnson and I look forward to the new challenges and opportunities that I’ll be afforded.”