The second unit in Numarine’s growing 32XP explorer-styled superyacht range has been completed by the Istanbul-headquartered builder and has been handed over to her American owner this month. Calliope will make her debut at the Fort Lauderdale International Boat Show in November where she will no doubt cause a stir with her bright and vibrant ice-blue hull colour. 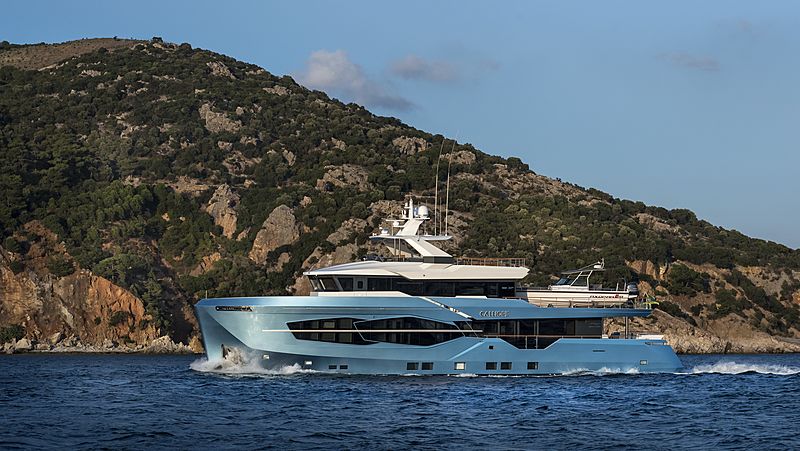 Following in the footsteps of the first 32XP, Marla, Calliope comes with several custom additions compared to her 2017 sister. Apart from the captivating metallic hull colour, Calliope’s greatest alterations are tucked away inside the vessel where her owner opted for different interior layout. Designed by Can Yalman, the general arrangement creates for a more social environment with expansive saloons and entertainment areas.

Where Marla had the upper aft deck dedicated to a grand owner’s suite with a private outdoor deck, this space is utilised as a comfy skylounge with bar and games table that leads through to the wheelhouse up forward. Subsequently, the master suite is located forward on the main deck with a full beam cabin and en-suite bathroom layout. Four guest staterooms are located on the lower deck.

To match the yacht’s explorer-style exterior, Calliope comes with impressive tender-carrying capabilities and a cruising range that puts uncharted grounds in reach. A nine-metre RIB is stowed on the upper aft deck along with two Jetskis that are each launched via a deck crane capable of lifting 2,5 tonnes. Calliope is able to cover 4,000 nm at a speed of 9 knots while a top speed of 14 knots will prove useful when trying to outrun approaching bad weather.

Numarine is currently in the final stages of hull number three in the 32XP range which will be ready for launch in the final quarter of 2018.