Home > News > Numarine to build larger superyachts, as it marks the debut of 26XP & 32XP

Cannes Yachting Festival 2018 is fully underway, as Turkish yard Numarine marks the double debut of the 26XP and the 32XP superyachts and confirmed plans to begin building larger explorer superyachts. 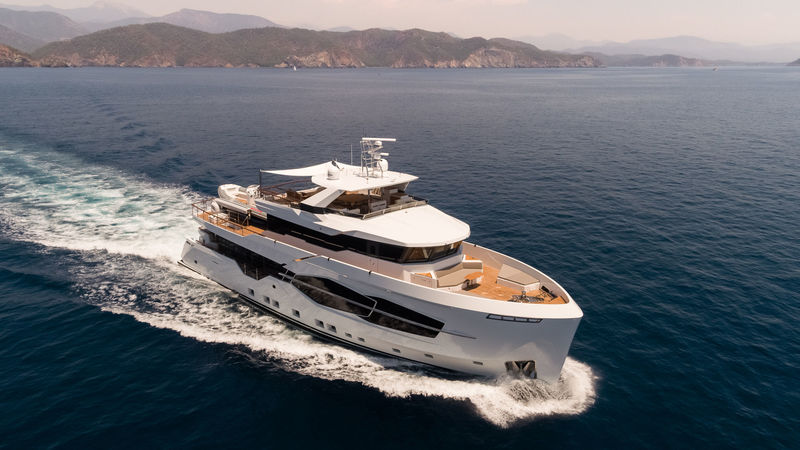 Photo: Jeff Brown / NumarineThe show in Cannes sees the World premiere of Numarine 26XP the full displacement version, and the European debut of the 32XP as the Turkish-based yard presented both explorer yachts together for the first time. During a press conference onboard of Marla, the first 32XP vessel from Numarine’s 32XP series, CEO Omer Malaz confirmed the shipyard’s plans to start building bigger superyachts following the success of the 26XP and 32XP. 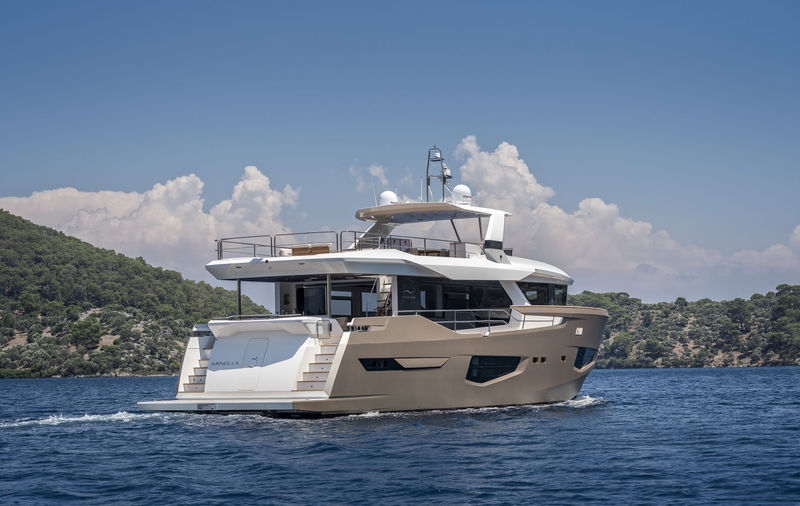 Photo: Kerem Sanliman / Numarine
“We do have plans for this,” said Omer Malaz, Chairman of Numarine.“We have been working on the 45XP flagship explorer model for months but full details will be revealed around November, probably during the Fort Lauderdale International Boat Show.” The decision to expand the XP series comes not long after Numarine delivered the second 32XP unit to an experience American owner and is set to make its world debut at FLIBS later this year. 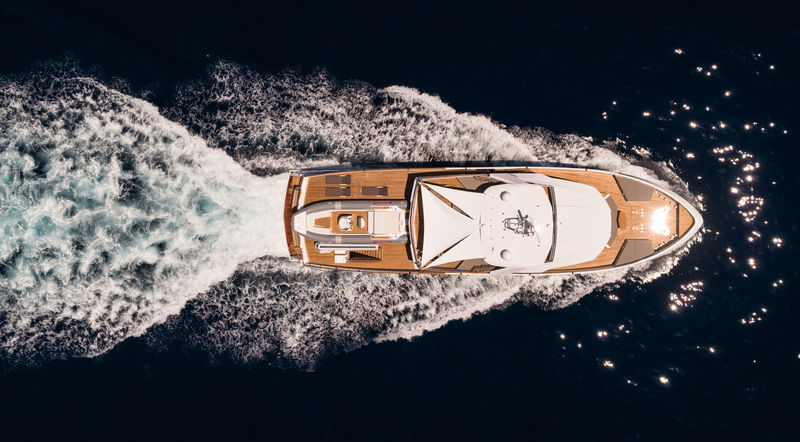 Photo: Jeff Brown / NumarineSuperYacht Times visited both superyachts at Cannes and was able to see the similarities and the differences between the vessels first hand. As both the 26XP and 32XP are part of Numarine’s new XP series of expedition yachts, they differ in design compared to the yard other performance vessels. The explorer superyachts exterior and interior are designed by Can Yalman, Numarine’s long-term collaborator, while their naval architecture is from Umberto Tagliavini. Both models feature angular windows and a vertical bow, giving them a modern and futuristic appeal and have been developed with ocean cruising in mind. 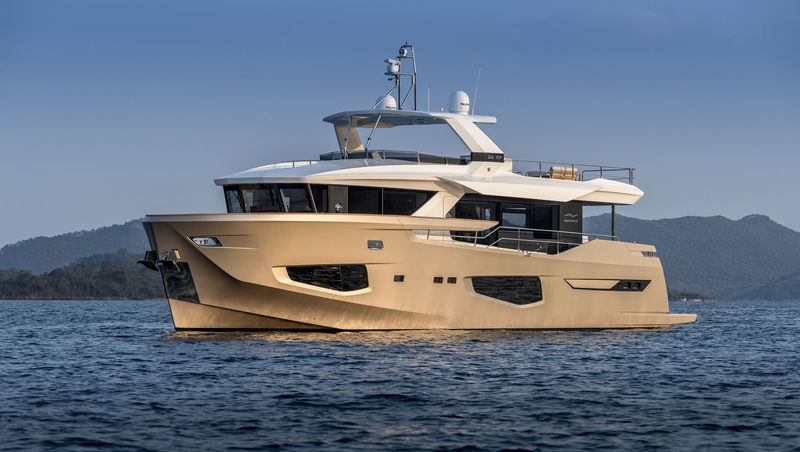 Photo: Kerem Sanliman / NumarineThe 26XP is a unique, compact explorer yacht. She can be built with either a displacement or semi-planning hull, with a maximum speed of 13.5 knots and a cruising speed of 9 knots with the former version and a maximum speed of 28 knots with the latter. The 26XP displayed at Cannes, hull 2 named Minella, showcased the air interior customisation option, with a neutral colour palette. 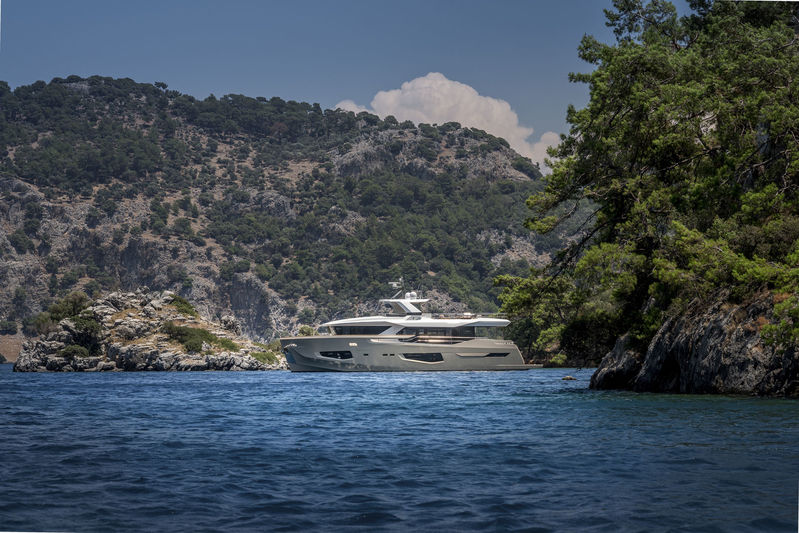 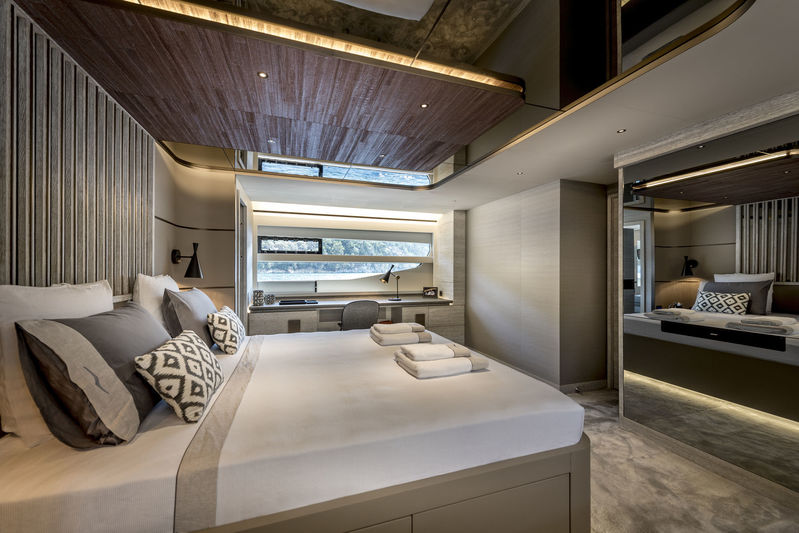 Photo: Kerem Sanliman / NumarineFeaturing four large guest cabins on the lower deck, two twins and a VIP cabin, the master suite is amidships. The full height windows on the main deck ensure the main saloon is saturated with natural light. One key feature of the 26XP is the special flybridge, which covers two-thirds of the hull’s length, proving enough storage space for a 5.5-metre tender. 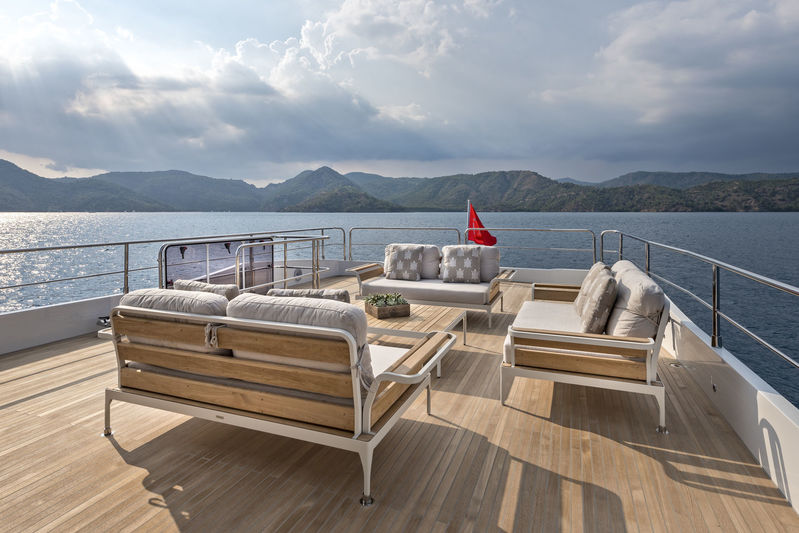 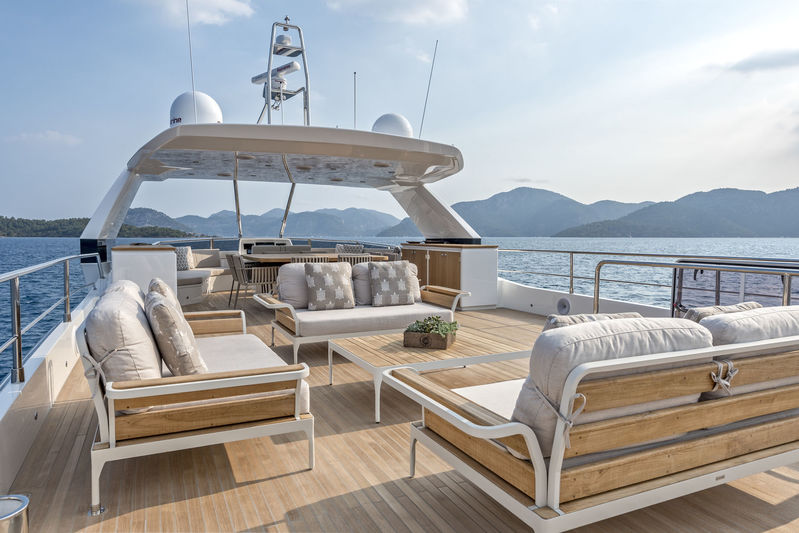 The 32XP, measuring 32.5 metres, is just under the threshold of the 300GT category, offering impressive internal living spaces on board. Her steel hull construction and GRP superstructure let clients create their own layouts internally and customised external spaces. She can accommodate up to 12 guests and offers ample storage facilities, ideal for long ocean cruises. 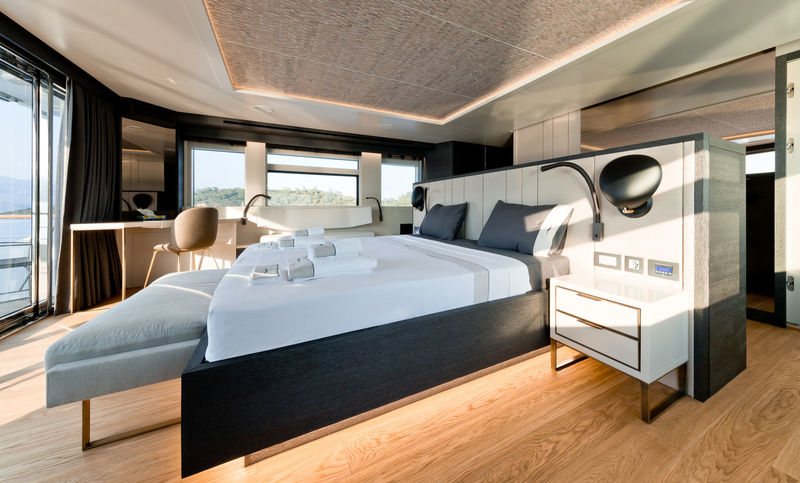 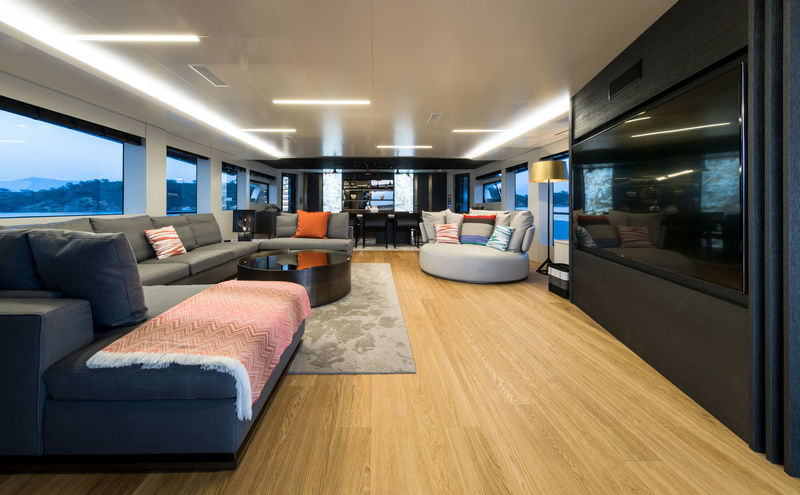 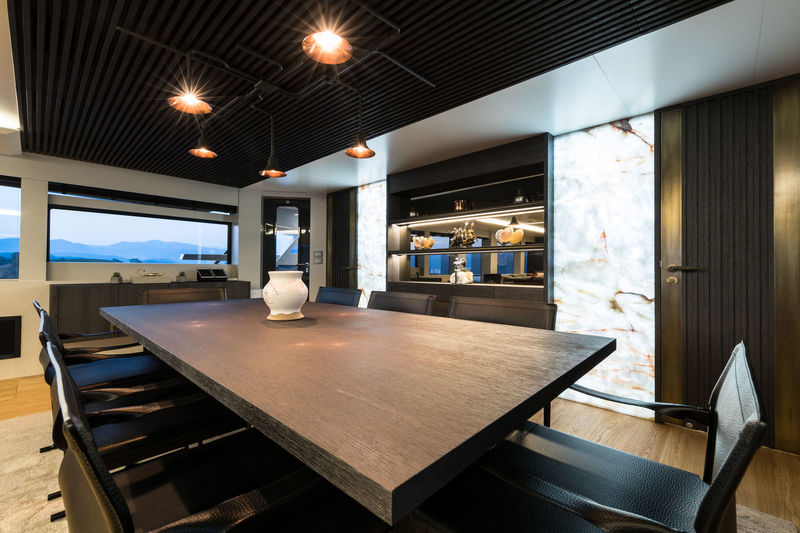 Photo: Jeff BrownMarla’s interior, the first unit of the 32XP series, is fully customised to the owner’s taste and preferences in terms of layout, design and materials. The main deck houses a large cockpit with a sun pad and a 48-sqaure metre saloon, galley and separate gym. Two VIP cabins and a pair of double cabins, with ensuite bathrooms, are located on the lower deck, while the 40-square metre owner’s cabin is located on the upper deck.
Numarine also paid special attention to the reduction of noise and vibration to ensure the noise level on board does not exceed 40 decibels even when running. The 32XP surpassed DNV Class 1 Comfort Class Requirements, with the noise level in the owner’s suite under 37 decibels with the engine running. When the superyacht is anchored, it is down to 30 decibels. 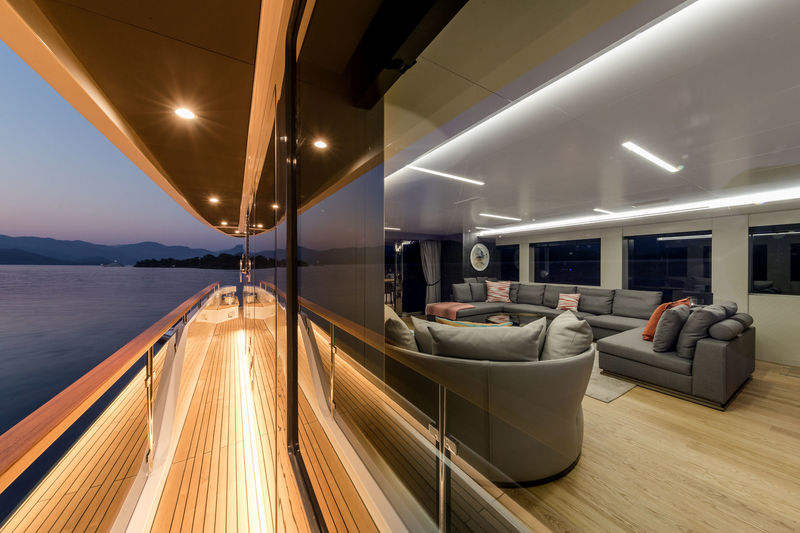 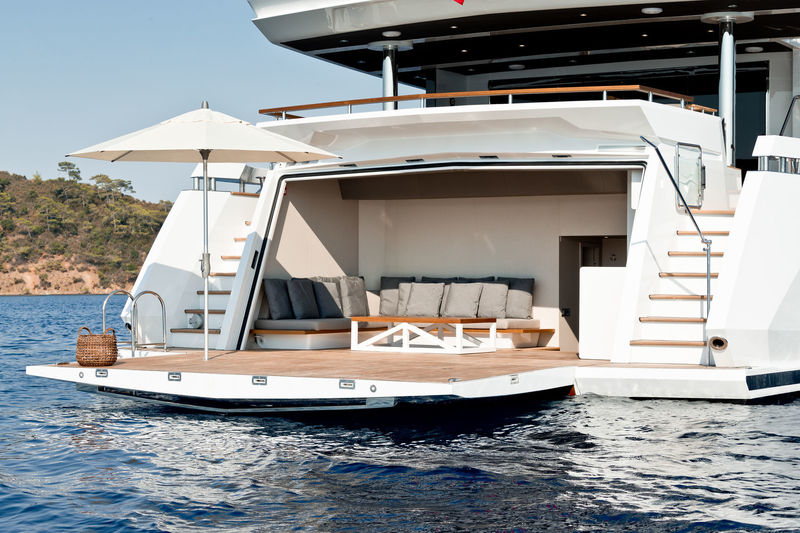 Photo: Jeff Brown"We like where we are now, we offer our clients an array of models from performance yachts to displacement oceangoing superyachts and explorers,” added Malaz. “But we also have some interesting plans for the future. Approximately 75% of our yachts are exported. We have clients from all over the world, including the Americas, Russia, Europe, Asia, Australia, and of course  our native Turkey.” While some may wonder if the yard is concerned with the recent devaluation of the Turkish lira, Malaz is confident the yard will continue to grow.

“I am certain soon it will find slightly lower than these historic figures. I do not believe it will have any effect on Numarine, with the upcoming Cannes and Fort Lauderdale boat shows we are exhibiting both 26XP and  32XP models, which I believe are what customers are looking for.”