Alexander Marine, the manufacturer of Ocean Alexander yachts, has announced the completion the 120 Tri-Level Motoryacht. This particular vessel was designed by renowned naval architect, Evan K. Marshall, and built by Christensen Shipyards. 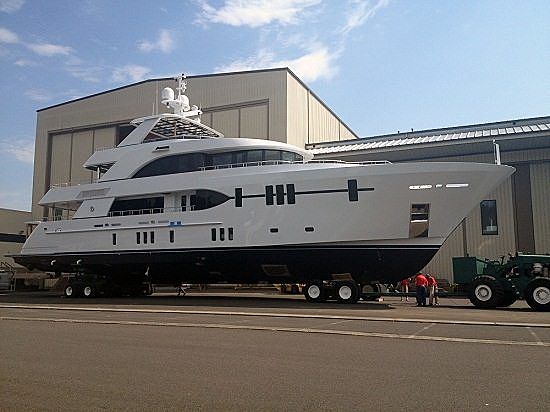 It has been a collaboration never before seen in the yacht industry between Ocean Alexander, Christensen, and Evan Marshall. The resulting yacht is a truly world-class vessel in every sense of the word.

Special attention to the design has allowed for this yacht to contain many of the features one would find on a larger superyacht that is normally excluded from yachts smaller than 130'. The yacht includes features such as an on-deck master stateroom, separate captain's quarters, crew for six plus captain, massive storage space to accommodate large luggage storage and other storage conveniences for chartering, walk-in pantry, full-size freezers, and the excellent tradition of Christensen build standards and attention to details. The yacht is also equipped with detuned Twin MTU 12V 2000 M72 engines, which provides an ability to run the engines full speed on a continuing basis.

The yacht will be launched on Friday, August 24, 2012. Final commissioning and outfitting will be completed by the end of August and she will start her maiden voyage to the Fort Lauderdale International Boat Show shortly thereafter.