Ocean Marine, the British sailing team owned by Mike Slade, confirmed that the exciting new maxi-yacht Leopard has been safely loaded on a container ship bound for Southampton, UK. The boat, which will be one of the fastest and most exciting new charter yachts on the circuit, was put on the ship from Sydney, Australia; it will then go via Singapore before arriving in Southampton on the 30th May. 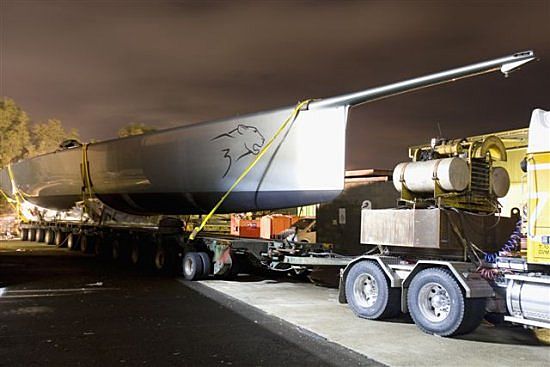 Following its arrival in the UK, Leopard will be fitted with her keel, mast, rig and sails before undergoing sea trials in the Solent. Leopard will then be launched in the UK in June, and is set to compete in a number of high-profile races and regattas all over the world.

Her first regatta will be the 2007 Round the Island Race, the annual dash around the Isle of Wight, in the UK. Following this the boat will take part in events around the world including the Morgan Cup, the Channel Race, the Fastnet Race, the Middle Sea Race and the infamous Sydney to Hobart Race which starts on Boxing Day.

Ocean Marine are presently seeking sponsorship and considering the possibility of an attempt, late 2008, for the most sought after record in the world: non stop around the world in under 80 days. Leopard follows in the footsteps of super maxi yachts Ocean Leopard (1988-1999) and Leopard of London (2000-2006). Like her predecessors she will be aimed towards top-level race sponsorship, day charters in the Solent and, longer term, charters in the warmer waters of the Caribbean. Ocean Marine is also looking at the possibility of incorporating a tour of SE Asia into the 2008 race programme.

Designed by the world famous, Farr Yacht Design, the new boat is some 24 feet wide, 100 feet long, has an 18 foot 6 inch canting keel, a 15 foot fixed bowsprit and a 154 foot high mast. Fitted out with 4km of rope, 6km of electrical cable and incorporating high performance racing features, Leopard will have three double cabins for guests and be luxuriously fitted throughout in an ultra light, airy and modern idiom, as designed and styled by Ken Freivokh Design in Fareham, UK. The interior will be removable for racing.

Mike Slade commented: “Chris Sherlock and the McConaghy team down in Australia have worked incredibly hard to get the boat to this stage. As is ever the case in these situations I think we will all feel more comfortable when she is safely docked in Southampton where she will be put together and we will get to see what she is really capable of. For all of us at Ocean Marine it is an exciting time and I am greatly looking forward to seeing it all come together.”