Oceanco actively contributes to the urban renewal of the city of Alblasserdam and expands its existing facility and capabilities acquiring 57,000m2 of new land. 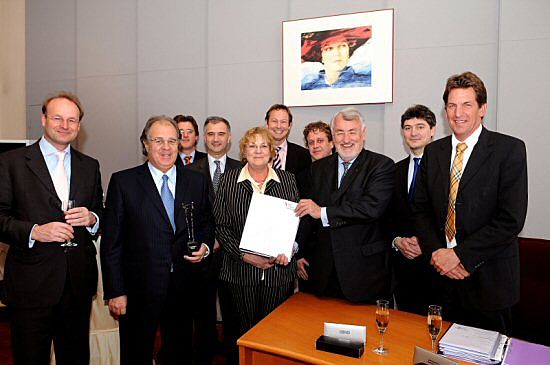 Oceanco located its shipyard facility in the City of Alblasserdam in 1997 and has ever since been a significant contributor to the community always enjoying a strong and collaborative relationship with the City and its residents.

The last few years the City of Alblasserdam and Oceanco have worked together to achieve their respective long term goals. The municipality has a strategic vision of making Alblasserdam the regional center for tourism and recreation and has invested a lot of energy and time in developing remarkable plans for the “Haven Zuid” development which includes the transformation of large areas around Oceanco’s facility into hotels, shopping areas and other tourism related activities. Oceanco’s vision has been to expand its capacity to include covered dry docks alongside its current location.

On Tuesday April 8, 2008 the culmination of the cooperation between the City of Alblasserdam and Oceanco took place and a significant step towards reaching their strategic visions was made. A formal agreement was concluded and signed, following months of meticulous investigations and analyses, where Oceanco acquired the existing shipyard facility neighboring its current location southwards – a total area of approximately 57,000m2.

At the same time, Oceanco offered to the community of Alblasserdam approximately 19,000m2 of its own land in order for the municipality to realize its vision for the area and the people of Alblasserdam. Oceanco is further contributing to the successful and expedited completion of the development plan by underwriting itself through bank guarantees part of the financing that will be needed for the works.

To officially greet the donation of the land the Mayor of Alblasserdam, Her Excellency Mrs L. Huizer, and the board of directors of Oceanco attended a formal signing ceremony at the town hall just a short walk from Oceanco.

Oceanco has always strongly believed and adhered in being a good steward to the environment, a strong and supportive neighbor to its community, a mission that flows through its entire business philosophy.