Oceanco was singled out and honored at the recent International Seakeeper Society’s annual Bal de la Mer held in conjunction with Yachts International Magazine at the 100-year-old Oceanographic Museum in Monaco on 23 September 2010. 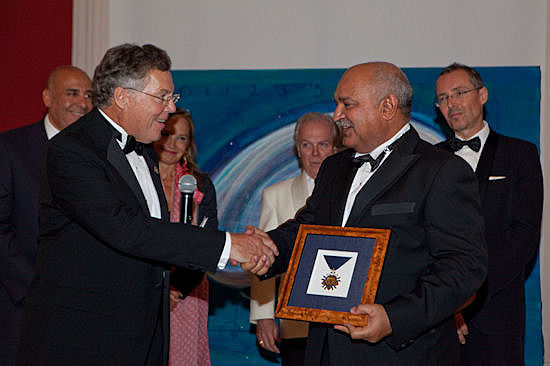 Mr. Mohammed Al Barwani, Chairman of Oceanco, joined the International Seakeeper’s Society (ISKS) as its newest founding member. Barwani states, he is “personally and professionally committed to helping conserve the world’s oceans.” When ISKS Chairman, Michael Moore acknowledged him on stage, Barwani said that he became a founding member “on behalf of all of the employees at Oceanco.” Additionally, Oceanco was a corporate sponsor for the fund raising gala. The black tie gala included a live and silent auction, and a sit down dinner held in the unique environment of the Museum’s aquarium, surrounded by tanks of live fish.

The ISKS, founded in 1996 by a group of yacht owners, developed an automated atmospheric monitoring system that could be installed on yachts and provide data to scientists at Scripps and NOAA—among other institutions—on the health of the oceans. Oceanco installs these Seakeeper 1000™ monitoring units on all the yachts they build.

Each year at the charity Bal de la Mer, the ISKS presents an award to an individual who has demonstrated an extraordinary commitment to ocean conservation. This year the award was presented to His Serene Highness Prince Albert II the day after during an intimate reception, in front of founding and board members of the ISKS.