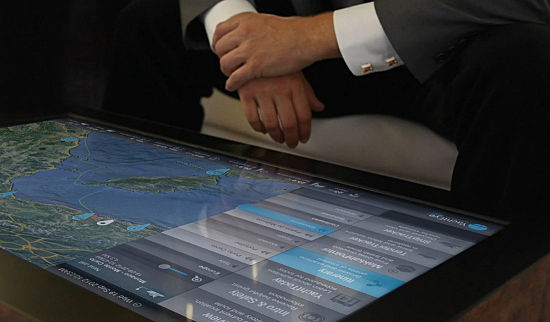 Introducing a greater range of available screen sizes plus the option of custom dimensions, this intuitive exploration of the 3D virtual yachting environment also now features a flush hardened glass surface. This can be flush mounted, and boasts a waterproof rating of IP56 and touch connectivity directly over IP. The screens can also be delivered complete with an interactive suite including games, video and image viewers and internet browsing.

The new API allows third party control systems to communicate with YachtEye, upgrading the YachtEye TV Channel from passive to interactive. Compatible with control platforms such as Crestron, AMX or Savant, the API also enables interactive YachtEye feature and module control from control panels and devices, providing the user with greater personal control and a richer experience. With the control interface connection, multiple users are able to share the system simultaneously whilst seeing each others actions. When used in conjunction with multiple YachtEye units, for example where one is allocated for the owner and one for the guests, control of each unit is entirely independent.

Following YachtEye’s most successful year to date, YachtEye will be on display and demonstrated at both the Imtech / VBH stand QD69 and on the Crestron stand QP5 at this month’s Monaco Yacht Show. A number of YachtEye dealers such as Alewijnse Marine will also be present at the show.