Odyssey Yacht Design has unveiled their new 39 Meter Motor Yacht, which has been codenamed OPUS. The name was chosen to evoke a sense of musicality, theatre and grandeur, and it is something which this Motor Yacht certainly delivers.

Odyssey Yacht Design is an Australian based studio in Australia’s marine precinct on the Gold Coast. It comprises of a diverse range of marine based specialists harking from many aspects of the industry. It requires the culmination of a large and diverse range of talents to deliver such high standards of design, and the staff at Odyssey, pride themselves on their ability to rise to any challenge and deliver something which will stand the test of time out at sea and in the imaginations of onlookers for decades to come. 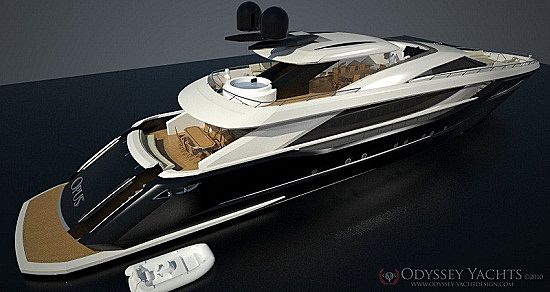 The latest Yacht to come from the studio’s drawing board OPUS, boasts accommodation for ten guests and a crew compliment of up to twelve. It has three large outdoor entertaining areas and a tender garage that can be configured to house a vast array of water borne activities. Certainly though, it is the striking appearance of the yacht from any angle which draws in the onlooker and instill in them a sense of power, luxury and excitement brought about by the striking lines and handsome proportions.

One thing which truly amazes about this yacht is the vast expanse of outdoor entertaining space it offers. From the hydraulic bathing platform up into the spacious cockpit, forward onto the foredeck lounging area and up onto a fly-bridge which could only be described as gargantuan, this yacht is truly geared to life in the great outdoors, as well as bringing the outdoors inside with you by way of the panoramic views offered by the full height windows on the main deck. A large portion of the main deck is centered around dining and lounging with an emphasis on the visibility of the surrounding environment through the enormous full height windows. The intention of this is to bring a sense of the outside into the internal living spaces.

The owners accommodation space contains its own lounge, spa, casual dining space, ensuite, walk-in wardrobes and of course spacious bedroom. It is in most respects, a yacht in its own right and can be filled with natural light from the large hull and fore deck windows that only serve to increase the feeling of space.

The guest accommodation space has been offered in two configurations, one with four stately suites the other with six that are more modest in size. Each suite contains ensuites, walk in wardrobes and large hull windows.