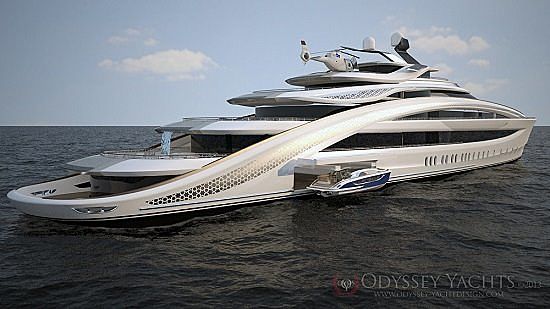 The interior spaces of the Nautilus are designed to inspire a sense of awe and excitement when experienced. The yacht was developed with the idea in mind that the simple act of moving from one space to another should afford one a sense of occasion and an experience of visual delight.

Central to the interior layout and most notable is the atrium. This unique feature spans an incredible four decks and is topped with a glass ceiling. The structure is glazed from floor to ceiling on each of the four decks of the atrium to allow the maximum amount of light into the space. The full walk-around balconies on three of the four decks mean that a different view of the space can be experienced whenever travelling from one area of the yacht to another.

The Nautilus boasts a large beach club on the lower deck which can be accessed from the lower deck cockpit via the grotto. The beach club also acts as a space for tender storage and can hold two twelve meter tenders and four jet skis.

The Nautilus accommodates up to fourteen guests throughout the lower and main deck areas, in large beautifully appointed cabins which follow the theme of the décor in the entertaining spaces.