Peter de Savary is a man of his word! He and his team have delivered the Port Louis Marina and Creole Village open and operational for the Christmas and New Year. The Port Louis Marina, which is already accepting some of the world's largest yachts and boats, was officially opened at a Grand Ceremony on Friday January 4 th 2008. 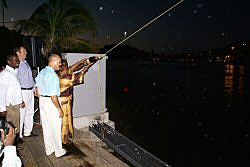 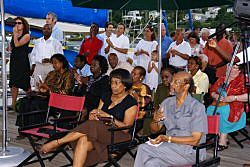 The Opening Ceremony came just days after the news of a major joint venture arrangement between the de Savary Group and the largest marina developer in the world, Camper & Nicholsons Marinas. In the new partnership, Camper & Nicholsons Marinas will invest 24 million US dollars to market and develop the Port Louis marina into one of the best and most exclusive in the world.

The opening which was attended by His Excellency Governor General Sir Daniel Williams, Minister of Tourism, Hon. Claris Modeste Curwen, Minister of Works, Hon Brenda Hood, Developer Peter De Savary, and Technical Director of Camper Nicholsons Marinas Bill Green. Speaking at the opening, Minister of Tourism Hon. Claris Modeste Curwen told the gathering that the project would bring great benefits to Grenada. "The Port Louis Development and the new joint venture with Camper & Nicholsons Marinas have the full backing of the Government and people of Grenada. Government knows that this project will not just benefit the many visitors who will come here but will also bring thousands of good jobs to Grenadians. We wish Mr. De Savary continued success and we say welcome to Camper & Nicholsons Marinas," Minister Curwen remarked.

Mr. De Savary described the joint venture as a huge benefit for Grenada. "I have always said that my presence in Grenada will act as an ice breaker, we open the way for more investment through our marketing our contacts and our reputation. The arrival of CN Marinas is a great example of this. Port Louis Marina and Grenada will now be marketed not only by us, but CN Marinas will also put their world class marketing machine behind this project. In addition, the new venture will mean that the marina project will now be completed even faster, as we will now concentrate on the development of the residential,, hotel and commercial aspect while CN Marinas focus on the marina," Mr. De Savary said.

Both the marina wall and 100 metre trestle dock are open with a capacity of up to 50 vessels all with full power, water and necessary infrastructure. The Victory Bar and village with its duty free shops are also open ready to welcome the marinas first guests and the general public.

In fact, the world's largest private sailing yacht was welcomed on December 27t h 2007. The 88 metre (288ft) clipper, Maltese Falcon called on Grenada to pick up guests just after Christmas. Port Louis Marina executives say this is the first time the luxurious Maltese Falcon has ever come to Grenada. They said that it is a great accomplishment for Grenada's yachting industry to have attracted a yacht like the Falcon who has the pick of any mega yacht marina in the Caribbean.

"When we came to Grenada we promised to help increase and bring a different level of visitor to the island. This is exactly what is happening here with the visit of the Maltese Falcon," said Director of Operations Richard Hallam. "The Maltese Falcon is the largest and one of the most luxurious yachts in the world. Thanks to Mr. de Savary's efforts and reputation we are delighted to be introducing boats of this caliber to Grenada. We expect the Maltese Falcon back in Grenada very soon, and Grenadians will see a number of other large and luxurious yachts visiting regularly," Hallam remarked.

In preparation for the visit of the Maltese Falcon Port Louis Grenada fast tracked the dredging and deepening of the entry channel for yachts. "We have created a draft clearance of 20ft of water for super yachts like the Maltese Falcon. The berthing facilities we are creating at Port Louis will be world class and exceed the expectations of these arriving yachts and boats," Hallam noted.