It has been confirmed by J.P. Morgan Asset Management, title sponsor of the Round the Island Race and title sponsor of triple Olympic Gold medallist Ben Ainslie CBE, that Ben's final public racing appearance prior to his bid for a fourth Gold medal in his Finn, will be on board the Big Class yacht Eleonora E, a schooner with some impressive vital statistics which has entered this year’s Round the Island Race on Saturday 30th June. 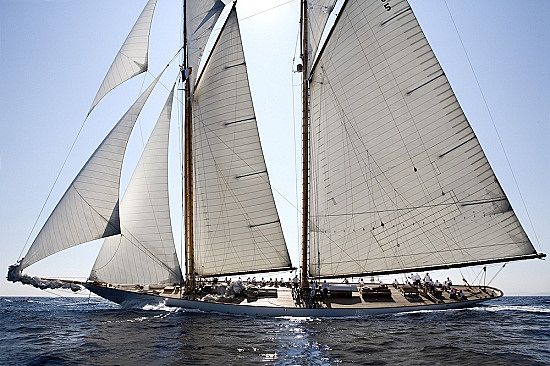 The Big Class yacht Eleonora E is an exact replica of the schooner Westward which was launched on March 31, 1910 as hull number 692 at the Herreshoff Manufacturing Co. in Bristol, Rhode Island, USA. She was arguably one of the most famous and best known racing schooners in the world.

Eleonora E was built at the Van der Graaf shipyard in Holland and was launched in March 2002. Since then, she has successfully participated in a number of classic sailing regattas and hosted on board a number of high profile guests during her charter activities. She was last seen in the Solent in July 2010 when she competed in the inaugural Westward Cup and she will be returning to compete in the 2012 Event just prior to the Round the Island Race.

During the Round the Island Race, Ben will co-helm with Eleonora’s owner, with the assistance of Eleonora’s captain Mike McMillan. Sharing the 25- strong crew duties will be a number of J.P. Morgan Asset Management guests alongside guests of the owner. They will undoubtedly enjoy the experience of a lifetime.

Ben, who was originally entered on a Beneteau First 40, is delighted to have this amazing opportunity commenting, "When I was asked to sail on-board the 49.5 metre schooner Eleonora E in this year’s J.P. Morgan Asset Management Round the Island Race, it was an offer that was too good to turn down. This will be my seventh Round the Island Race and I’ve competed in everything from an Open 60, Extreme 40, Kerr 40 to an SB3 – but nothing is going to match sailing the 50 mile course on this beautiful classic and I would like to thank her owner Mr Zbynek Zak and J.P. Morgan Asset Management for making this happen.”