Massive Omani celebrations at The Wave, Muscat as Oman Air and The Wave score a one-two, squeezing out the French team of Groupe Edmond de Rothschild who had finished every day but the last on top. 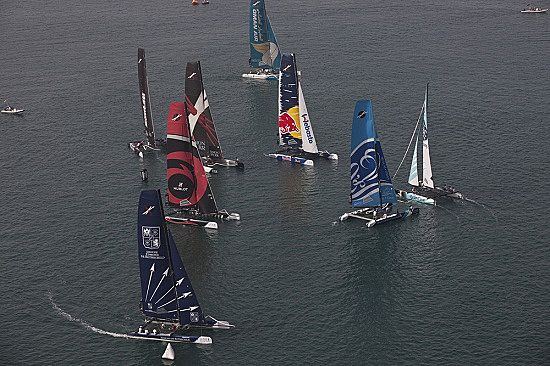 Going into the first Act of the Extreme Sailing Series 2012, the all-French team of Groupe Edmond de Rothschild led by Pierre Pennec were favourites on paper and few would have predicted the final outcome that saw Morgan Larson’s team on Oman Air triumph in their debut here in Muscat, Oman. Four teams were in contention for the podium going into the final double-points race – the new Danish entry, Team Trifork, won the race, but Oman Air did enough to secure victory after an intense battle with the favourites. Leigh McMillan’s team on The Wave, Muscat muscled their way into the two-way fight and raced brilliantly on the final day to finish 2nd overall ahead of Groupe Edmond de Rothschild with Austria’s Roman Hagara (Red Bull) in fourth, having been just one point behind the French going into the final race. 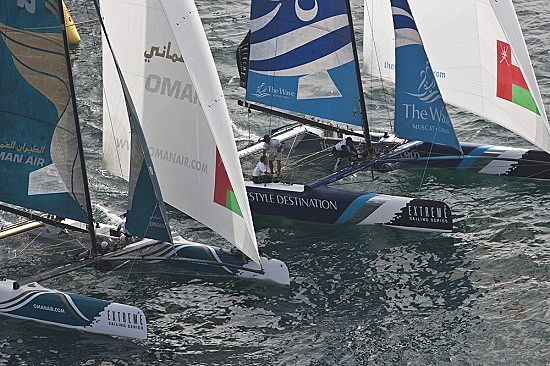 “It’s an amazing feeling! It was a challenging week and obviously our learning curve was quite steep,” said Larson. “But this was really hard racing and any team could have won going into those last couple of races and we were just lucky they went well for us.” Morgan Larson’s team that includes four-time Olympian Charlie Ogletree and Max Bulger from the States, Britain’s Will Howden and Omani Nasser Al Mashari competing in his second Extreme 40 season, held on to a marginal lead from the opening race today but in the fourth race of the day the pressure mounted… Pushed over the line at the start, Oman Air had to restart and trailed the fleet, Larson’s team finished 7th leaving them on equal points with The Wave, Muscat and Groupe Edmond de Rothschild 2 points adrift. In the next race, won by Loick Peyron’s team on ZouLou, McMillan’s team finished ahead of their teammates and pulled ahead by 1 point. By the end of the penultimate race the two Oman Sail teams were back on equal points going into the final double-point decider and Pennec’s team had to win the final race with Oman Air and The Wave, Muscat finishing no better than 6th place. It was too tall an order for the French favourites who managed to get ahead of their rivals to finish the race in 2nd but Oman Air crossed the finish line in 3rd to clinch overall victory after 4 days and 29 races. 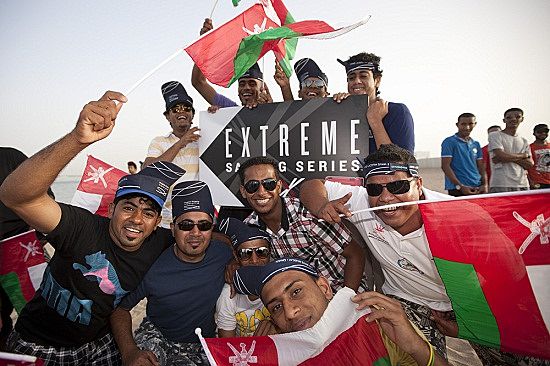 “Surely I feel disappointed about not having sailed well today,” said Pierre Pennec, skipper, Groupe Edmond de Rothschild. “But this is the nature of the sport and even if this sounds strange, I feel very happy about this week’s competition. I really enjoyed being on the water and despite the fact that this is my fourth year in the Extreme Sailing Series, we have learned a lot in these last few days. My new crew sailed here for the first time and they have shown great human, mental and technical potential. I think it’s fantastic that the two top crews here in Muscat are the local teams. They are going to be seriously competitive this season.”

It proved to be a thrilling opening Act to the season and, after five years of Extreme Sailing Series competition, there is a feeling that 2012 is going to be one of the closest yet. “It’s up to us to catch up and be competitive in China because the goal is to win overall. Third is still a good result – it could be worse! It’s a warning for us,” said Hervé Cunningham, tactician Groupe Edmond de Rothschild.

Ernesto Bertarelli, skipper, Alinghi: “It was fantastic, fantastic. For me it’s great, a different format but I learnt so much every day, every race, it’s what I’m here for. I’m here to experience something different, something the excitement of this format and I really enjoyed myself. It’s close, it’s not very different from a normal regatta, it’s just that everything happens so much faster. In a normal regatta you have close contact or tactical situation with a boat maybe every 10 minutes, here it is every 15 seconds!”