With panoramic vista leading to panoramic vista, Heesen’s superyacht Moskito pushes the boundaries of current demands for the utilisation of glass aboard superyachts. Launched in 2020 as Project Pollux, Moskito is the fifth hull of the 55M Steel series, and alongside her sistership Solemates, is an evolution of the model, marking a revision in the builder’s perspective on internal spaces. 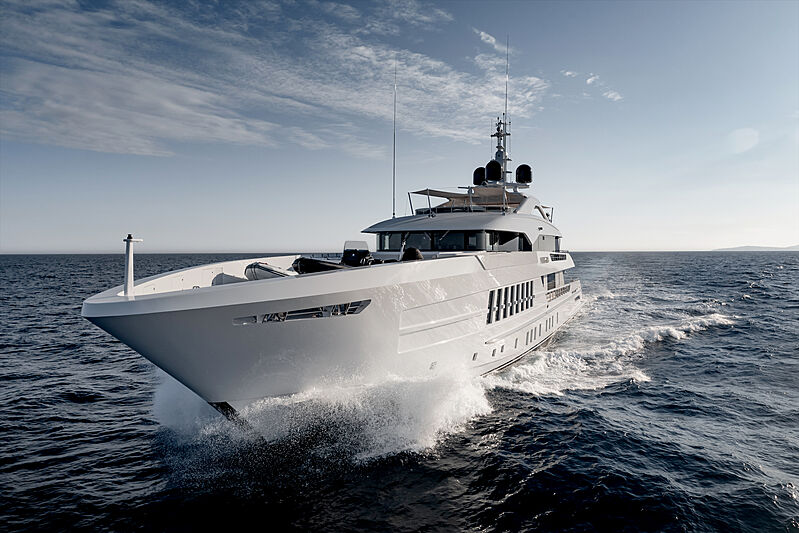 Photo: David ChurchillWith a prioritisation on space and light, the five stateroom layout on the yacht’s lower deck has been reconsidered, with one stateroom moved onto the upper deck as a VIP suite, allowing for each cabin to be extended. The social areas on the main and bridge deck have also been expanded, particularly the upper saloon, which is now considerably larger. Renowned British design firm Bannenberg & Rowell, was commissioned to turn Heesen’s vision into a reality, and as the tenth collaboration between designer and builder, Moskito is an exemplar of their creative relationship. Here we take a closer look aboard Moskito, with an insight from Bannenberg and Heesen’s Executive Commercial Officer Mark Cavendish. 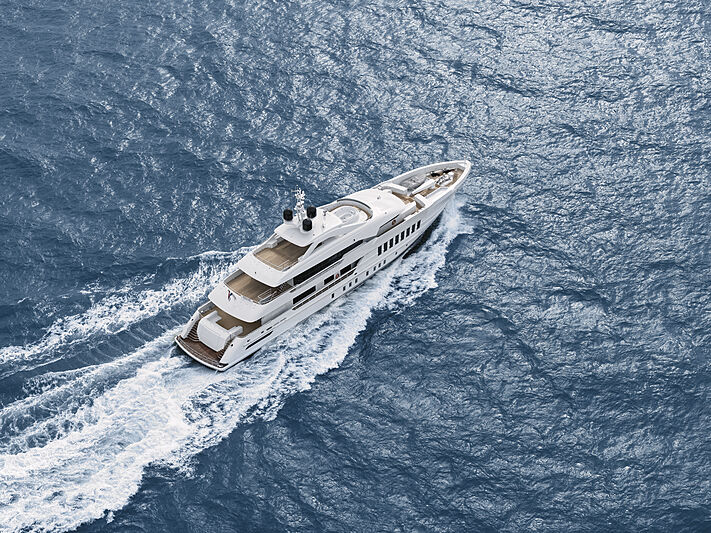 Photo: Dick HolthuisOriginally built on speculation, Moskito features advanced naval architecture from Van Oossanen and utilises the pivotal Fast Displacement Hull Form to ensure performance and efficiency, drinking only 40 gallons of fuel per hour at a cruising speed of 11 knots. Her masculine exterior aesthetic features a design signature described by her designers, Omega Architects, as a “shark tooth” design. This sharp triangle of aluminium points vertically down from the curve of the wheelhouse overhang and the impact is accentuated by the vertical windows that run like gills along her sides. 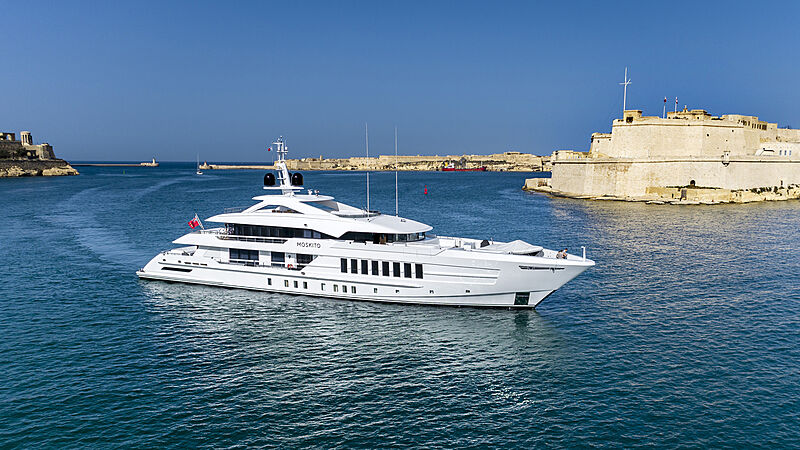 Following the delivery of Vida in 2019, the third 55M Steel, the team at Heesen decided to revise the architectural arrangement of the upper superstructure, lengthening the upper saloon and carving out space to accommodate a VIP cabin. In doing so, they were able to restructure the lower deck stateroom layout. 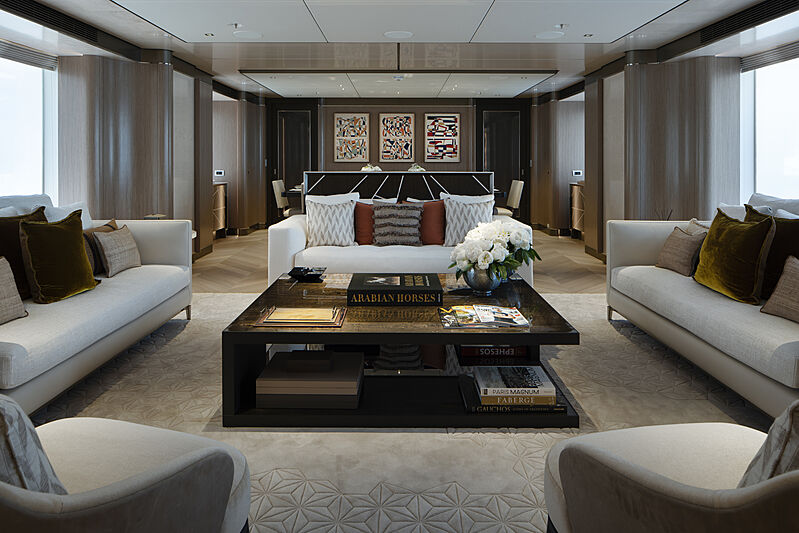 Photo: David ChurchillWhen questioned why this restructure took place, Cavendish noted that Heesen has come to realise that often, guests utilise the bridge deck for entertainment and relaxation, perhaps more than the main deck and beach club. “The upper saloon is probably three quarters the size of the main saloon, which is unusually large, and I would not be at all surprised if guests mainly used that saloon instead.” Leading out of this upper saloon, guests are faced with an expanse of deck, and with the main dining table located here, the desirability of this space is immediately recognisable. 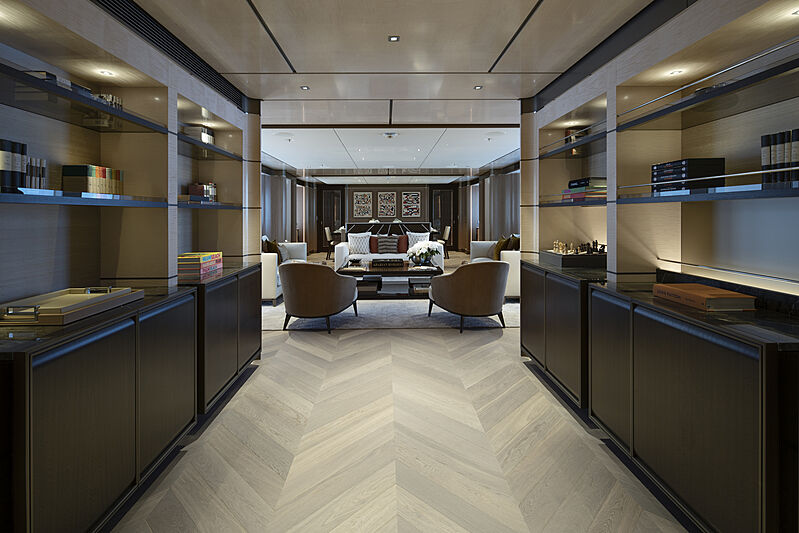 Photo: David ChurchillThis upper saloon, which has a bar to the port side and an array of seating options to starboard, with a large television screen centrally located, has a relaxed feel, “the doors will be open a lot to the aft deck, and we wanted to give that space a different vibe from the more formal main saloon below,” said Dickie Bannenberg.

For the team at Bannenberg & Rowell, designing the interior of a speculation project is a golden egg; within the restraints of the design brief, they are uninhibited in their stylistic choices and free to experiment with unique design tools. Mark Cavendish commented, “Interior designers have a finger on the pulse, and a better understanding of where styles and trends are moving than we do as yacht builders, so we let them come up with the interior design. Of course, we review, because we don’t want to design yachts that are too individualistic, as it reduces our market. This calibre needs to be stylish, which is why we choose top designers like Bannenberg & Rowell to work with.”

Photo: David ChurchillMoskito’s interior design emanates the stylistic verve that Bannenberg & Rowell are renowned for. When you first look at the interiors, it would be easy to misleadingly consider them minimalist, in truth, the clean, geometric, lines and neutral palette have been cleverly enhanced by the subtle use of curved forms that punctuate the vertical surfaces. 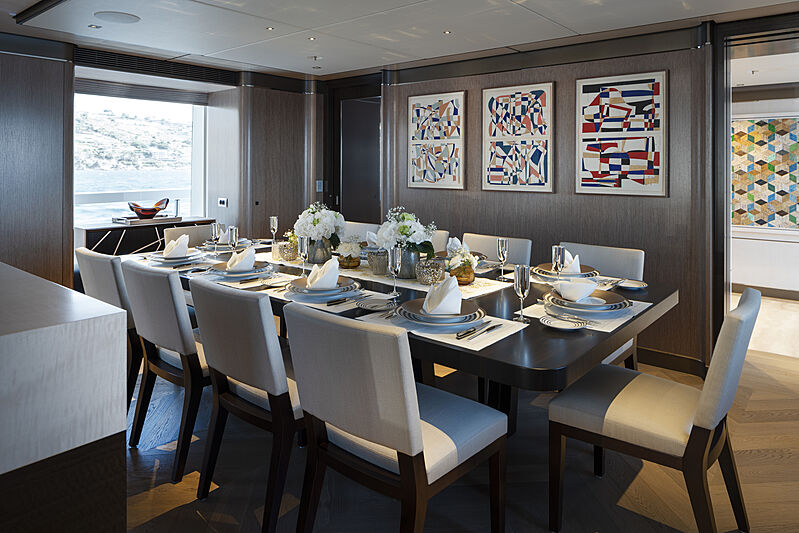 Photo: David ChurchillDickie sees these curved forms as the most characteristic design feature of her interior, but the organic, panelled walls have more than simply a stylistic role. “We wanted to get some kind of soft and sinuous form into the bulkhead panelling. This is most prominent in the main saloon, where it shrouds and disguises the engine room air casings.” 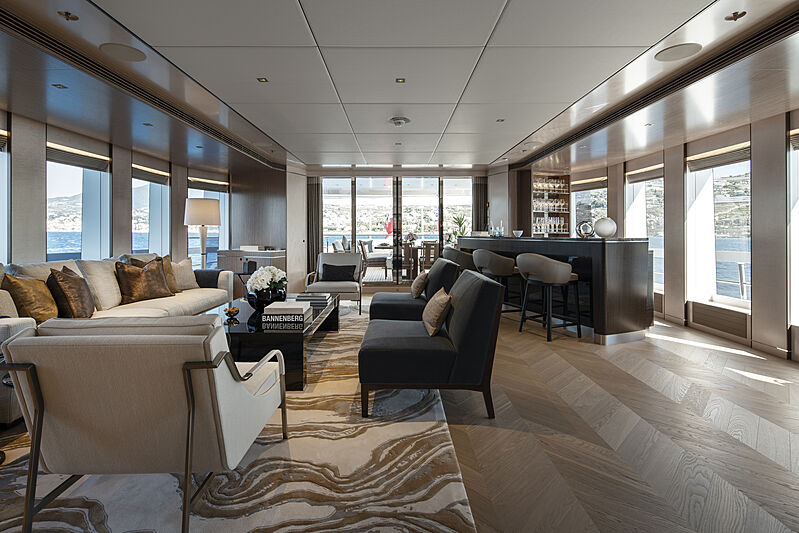 Photo: David ChurchillSimilar, though simpler, forms are found below within the guest cabins, materialising as gently rounded surfaces, while the master stateroom on the main deck, and the upper deck VIP stateroom, carry the theme through. The master suite, an impressive 82 square-metre apartment on the main deck, in many respects the heart of the yacht, has a subtly curved arc panel, disguising the main bulkhead, which flows through the bookcase to port. Behind the bed, the Eucalyptus panelling from the main saloon is echoed, creating a subtle synergy throughout the interior.

The owner was so taken by the interior design, that he requested Bannenberg & Rowell select the entirety of the interior styling. The team scoured the British art market to find contemporary pieces to complement the interior aesthetic. “It was quite an unusual request from the owners to finish right down to the books and the artwork, but of course as designers we like this level of design because it enables us to ensure that the whole yacht works together very well.” 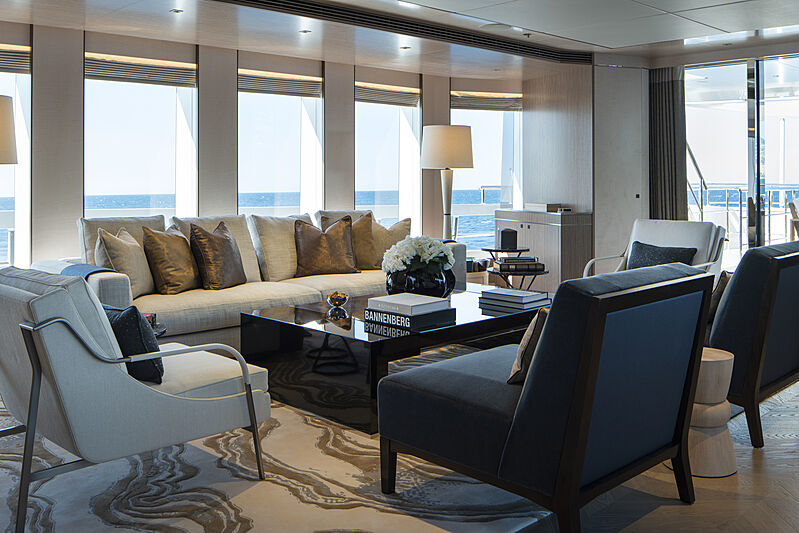 Photo: David ChurchillThe artwork was selected to enhance and balance the neutral, geometric interiors, which are finished in an array of fine woods and materials. White and neutral tone leather wall panels and light grey metallic majlite, a faux leather material covering the ceilings and sections of the walls, create a vision of softness. This is punctuated by brushed vintage nickel details, found in the trim of the dark eucalyptus furniture, and pinpointed on the bedheads. 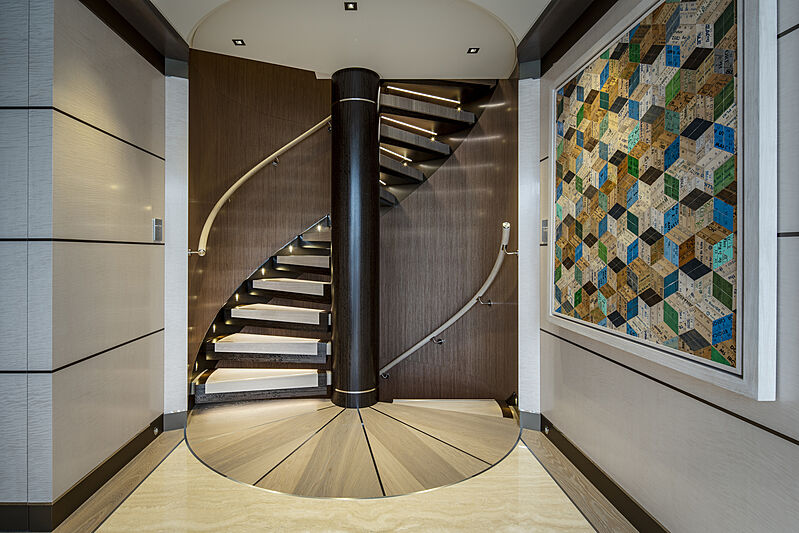 Photo: David ChurchillAll materials selected by the design team emphasise the impressive amount of natural light provided by the expansive employment of floor-to-ceiling windows. The furniture has either been especially designed by Bannenberg & Rowell, or has been sourced from the finest designers across the world. One such piece, a coffee table from Amsterdam, features a nano-technology finish that seals itself when scratched, leaving the surfaces unmarked.

Moskito’s owner purchased the superyacht in September 2020, when she was around 80% complete, and the team at Bannenberg & Rowell had to move quickly to complete the outfitting whilst in the throes of Brexit. Then came Covid-19, an additional spanner in the works, but the entire team saw to her completion in time for her delivery in April. When the owner stepped aboard the superyacht in Malta, it was the first time he had seen the vessel in reality, and neither Dickie, nor Mark, were there to greet him, a very unusual modus operandi for the team. 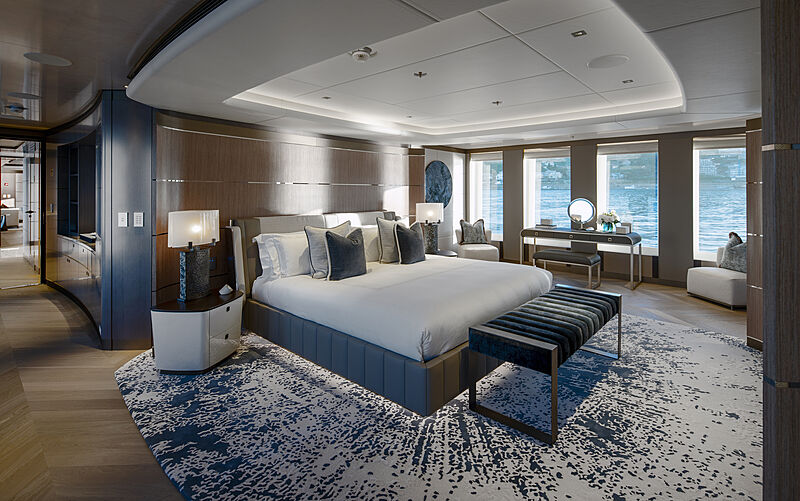 Photo: David ChurchillFor Bannenberg & Rowell, this was a hugely exciting project to be involved in, and to have the support of an owner who embraced their stylistic spirit entirely means that it is a standout within their portfolio. 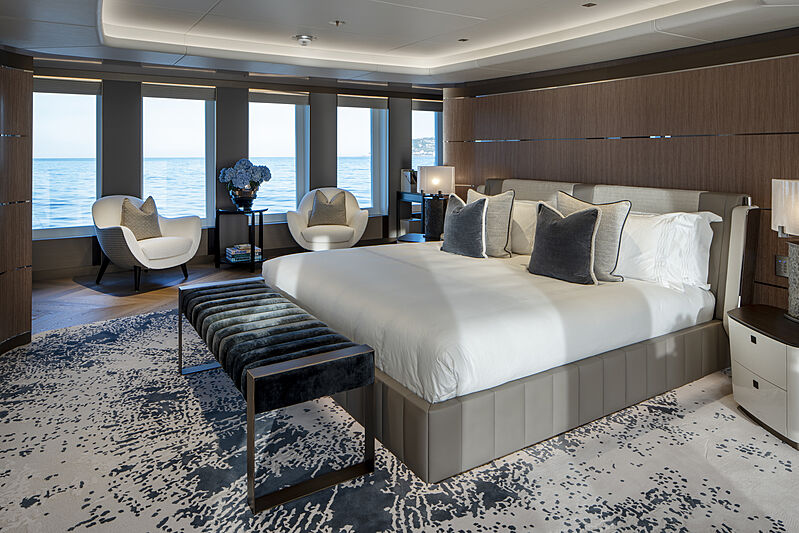 Photo: David ChurchillAs for the future of Heesen’s 55M Steel, Mark Cavendish commented, “I do not see demand cooling off for this yacht, we have just sold the sixth hull and are now in construction of the seventh. I would be very surprised if the model doesn’t go into the 10-plus hulls, it is right up there with our most successful model, the 47M Steel, of which 13 have been constructed.” 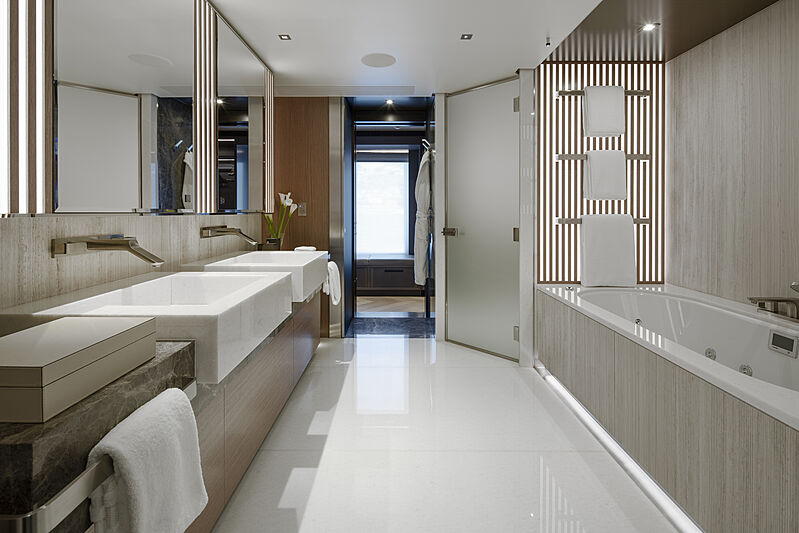 Photo: David ChurchillMoskito will be exhibited at this year’s Monaco Yacht Show in September as an example of one of Heesen’s most impressive superyacht series’. 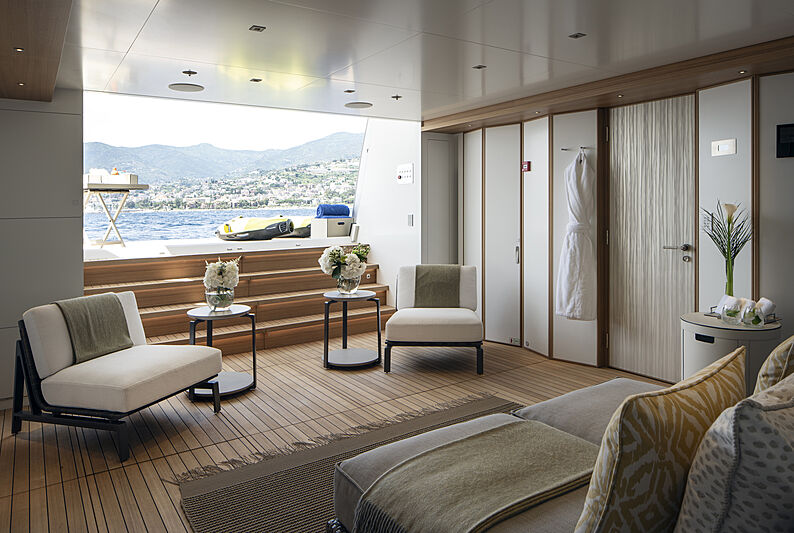 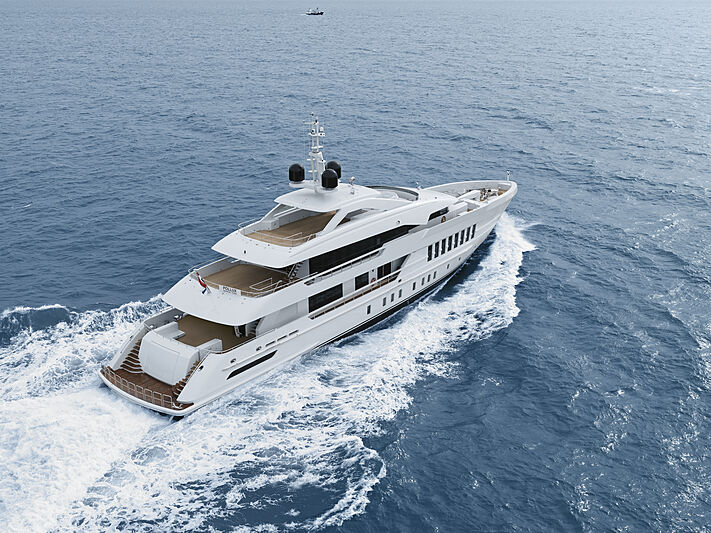 Photo: Dick HolthuisThis article was originally published in the Autumn 2021 issue of The SuperYacht Times newspaper. To receive all future issues straight to your door, subscribe to the newspaper here.