What do you get when you combine a passion for the ocean and marine-adventure films, a keen eye for design, a natural love for dogs and years of owner experience? The all-new 64-metre Scout is not only a step up from her owners’ former 45-metre motor yacht by the same name, but has been optimised in every sense into a 100% customised work of art that is teeming with a highly intriguing interior style, dripping with creativity around every corner you turn. 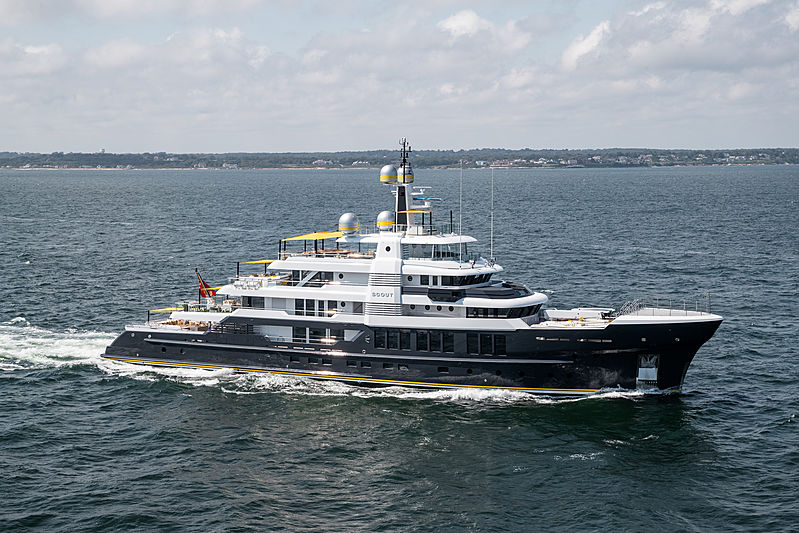 Photo: Jeff Brown / Breed MediaWith the help of Jonny Horsfield and his team at H2 Yacht Design, the owners took the plunge to build their ultimate underwater-themed home-away-from-home that would be timeless and elegant, yet unlike any luxury yacht you have ever seen. “Throughout the project, the owners insisted that we should imagine that we were refitting an existing but old commercial ship. He brought his influences from art and movies and I interpreted this with a subtle, industrial, steampunk vibe.” 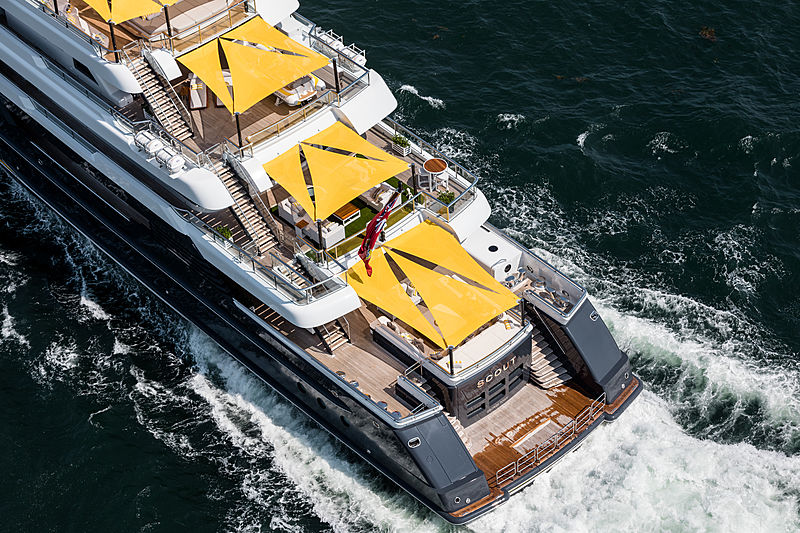 Photo: Jeff Brown / Breed MediaConstruction on the project we know today as Scout started at the Hakvoort Shipyard as Project 249. Though not much of this original concept remains visible in the design we see today, the original hull lines and platform, which were extensively tank tested, went on to form the foundations of her owner’s new yacht, and the base onto which H2 placed their custom design. Talking about this transition process, Horsfield explains: “In the end, we removed most of the existing superstructure, or at least its outside skin, as the original design had a very soft styling with a 1930s retro feel to it. We wanted much sharper lines with a more macho style.” 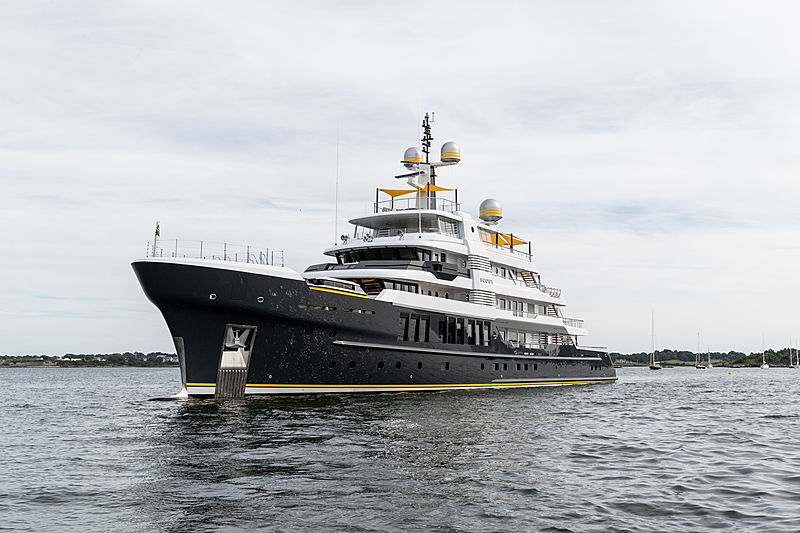 Photo: Jeff Brown / Breed MediaAnd macho she is. This puppy is not only designed to look like an explorer, but to act like one too. Naval architects Diana Yacht Design have been involved in the project since 2013 when the first hull lines were drawn and know her capabilities better than most. “The ice-classed hull was extensively tank tested, resulting in a comfortable, elegant, and fuel-efficient yacht,” explains the design office. One particular challenge faced during the redesign by H2, notes Diana, was the addition of a touch-and-go helicopter landing pad on the bow along with two eight-metre tenders.

The original design only accounted for two 7.5-metre tenders stowed on the aft deck. “These new additions created a bow-down trim and subsequently necessitated the addition of buoyancy, which was added in the form of a bulbous bow.” Luckily, this new addition only enhanced the explorer style of the boat which the owners were after. “They liked the idea and asked to make it as big as possible - and preferably partly visible above the water surface to improve the explorer look of the yacht. The first sea trials in February 2019 exceeded all expectations and the low fuel consumption resulted in an impressive range of 6250 nm at 10 knots.” 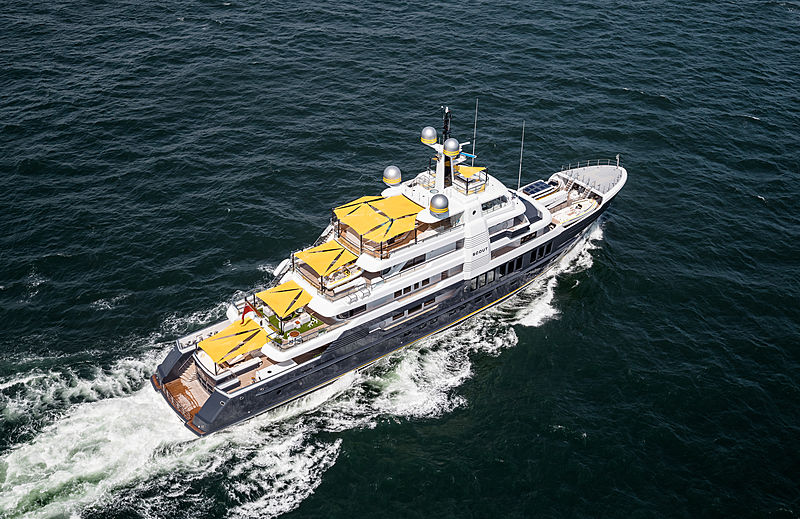 Photo: Jeff Brown / Breed MediaThis ended up fitting the design brief perfectly, as the new Scout’s bark was to be just as real as her bite, explains Horsfield. “The owner wanted a much more robust and comfortable yacht as the plan is to take the yacht much further afield then they had gone previously. At the same time, the owners always wanted a strong authentic explorer aesthetic anyway, so the functionality was very important to them.”

And not only functionality in the yacht’s capabilities, but the overall usability of the spaces on a day-to-day basis was just as important.“The layout of the yacht was quickly established with the focus on the owners and their personal use,” Horsfield explains. The master suite, for example, is placed on the upper deck and faces aft, just like the owners’ previous layout, while the sundeck, although larger in size and with an added viewing deck, is practically the same as the old Scout. As for the owners’ canine companions that follow them around the world, a special dog park on their private aft deck formed part of the design from day one. 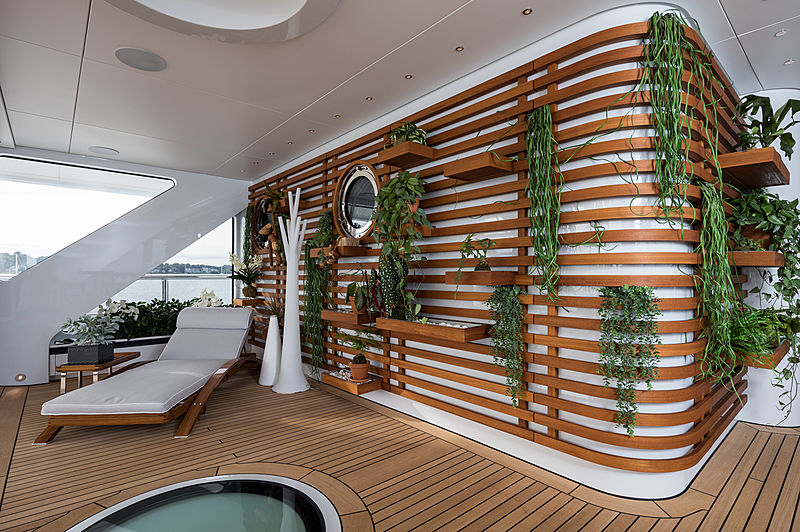 Photo: Jeff Brown / Breed MediaIt is these personal touches, of which there are many all around the vessel, that Horsfield managed to incorporate that he feels made the project such a success. “The yacht has been well received by the client who put his faith in me to interpret a challenging brief. It is very satisfying as a designer to experience this and I think it hopefully shows the industry just how creative we are as a design house.” 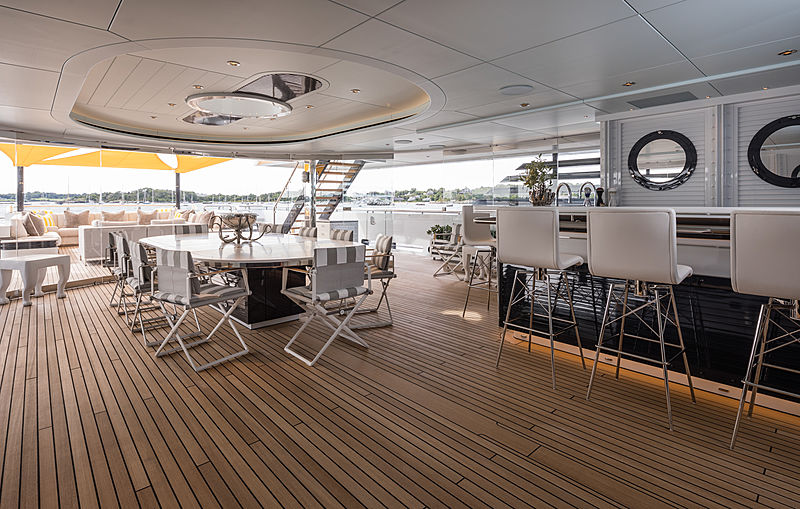 With an exterior that exudes a rugged and no-nonsense expedition character, the interior on board Scout continues this deeply ingrained maritime theme but with a sense of flair, whimsy and no small amount of creativity. As if joining Steve Zissou on his latest underwater quest, Scout transports you to a wonderful and wet world of scientific exploration into the unknown. “The owner came to the table with an incredibly clear vision for an explorer-interior inspired by the iconic movie 20,000 Leagues Under the Sea, Fritz Lang's Metropolis and the cool, industrial lairs of James Bond villains!” explains Horsfield. 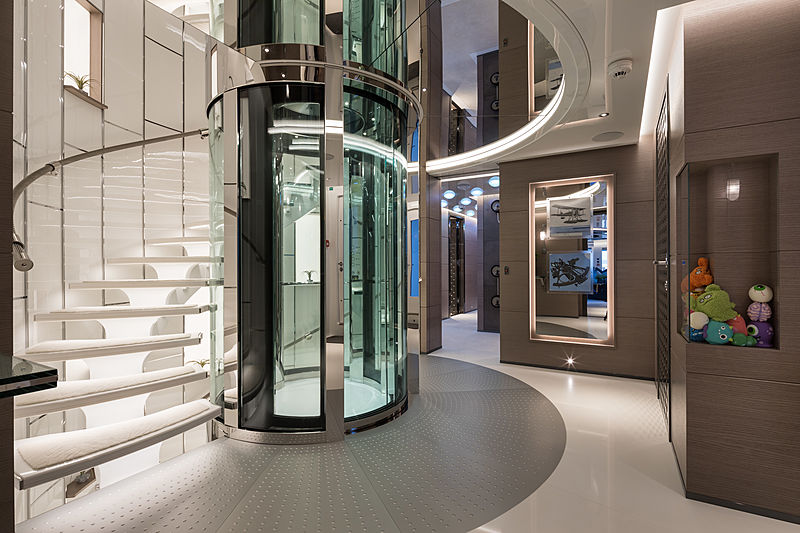 Photo: Jeff Brown / Breed MediaWith the aft-facing master suite situated on the upper deck, the main deck has been allocated as the main guest accommodation area where a central corridor, lit with pulsating lights as if you were in Captain Nemo’s submarine, separates four large VIP staterooms each with their own full-height windows and ensuite bathroom. Considering the out-of-this-world destinations her owners plan to visit with Scout, visibility from inside the yacht not only keeps with the expedition-style of the yacht, but also makes complete sense on a practical level. The upper deck forward, therefore, is used as a wonderfully bright and airy observation lounge with slanted forward windows and a huge skylight. 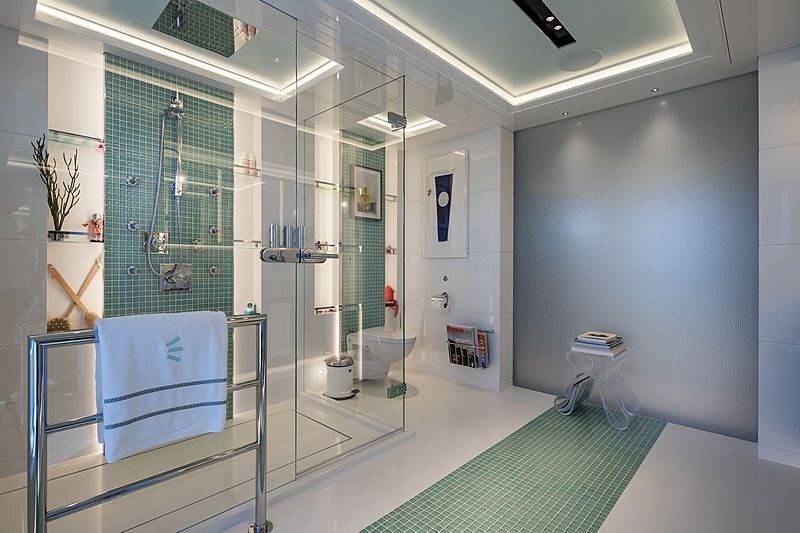 What gives Scout’s fantastical aquatic interior theme such tangible substance are the hundreds and hundreds of intricately placed ship-inspired pieces that are visible in every direction you look. “The owner wanted to see quirky details that might have existed if we were really refitting an existing ship at a commercial level. He has a fascination with machines and old collectable nautical curios and antiques, so we made use of all these items around the yacht adding to it that personalised look.” 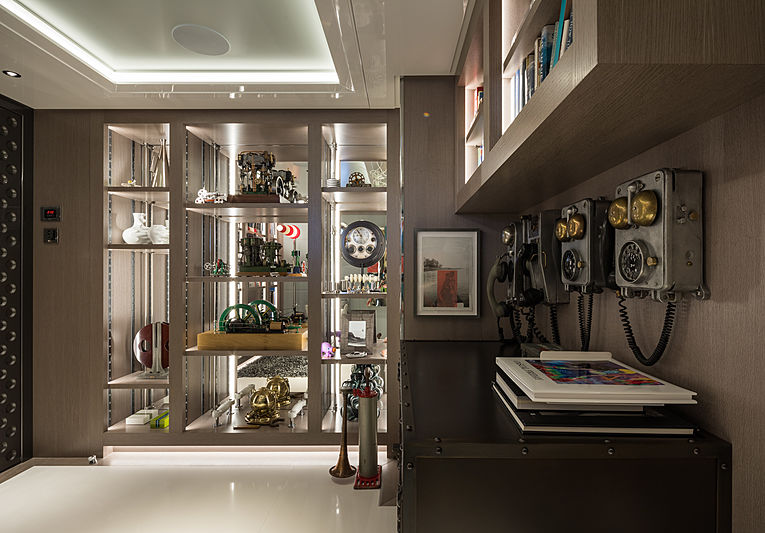 Photo: Jeff Brown / Breed MediaA collection of barometers and pressure gauges are found in nearly every corner of the vessel and details such as old-school diving mask, wire cable as the grand staircase’s handrail and twist-lock door mechanisms remind you that this is no ordinary luxury yacht. “Even the handles to the wardrobes are real repurposed rope cleats!” Horsfield points out. “Overall I think we have created a beautiful but purposeful yacht that is full of details that might appear at first glance to be standard but were all in fact carefully considered and refined to meet this challenging brief. We couldn't be happier with the final result.” 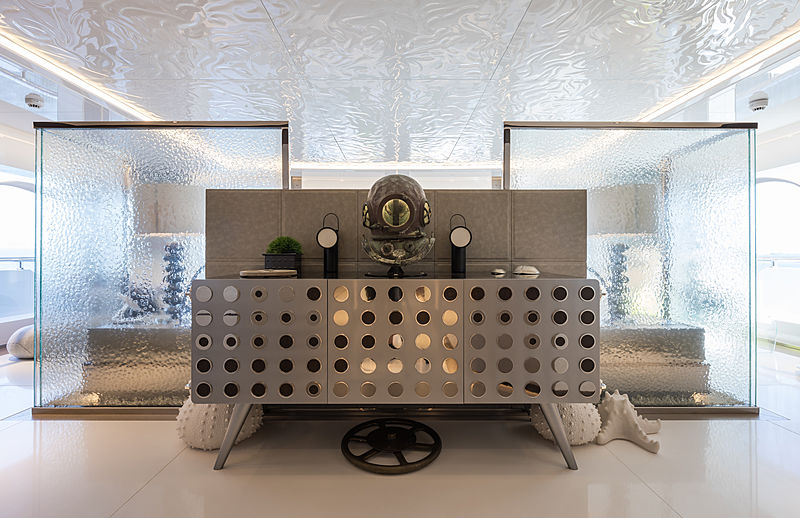 With so many intriguing features and elements throughout the yacht that catch the eye, the interior area that stands out above all the rest for its imaginative and thought-provoking design has got to be the spectacular main saloon. One’s attention is immediately drawn to the centre of this room where an awe-inspiring, almost mesmerising ceiling feature draws you in. Best appreciated after sunset, this work of art is an interactive TV screen mounted in the ceiling that gives the illusion of stepping into an underwater lair, gazing up at some of the deep’s most majestic creatures circling past. 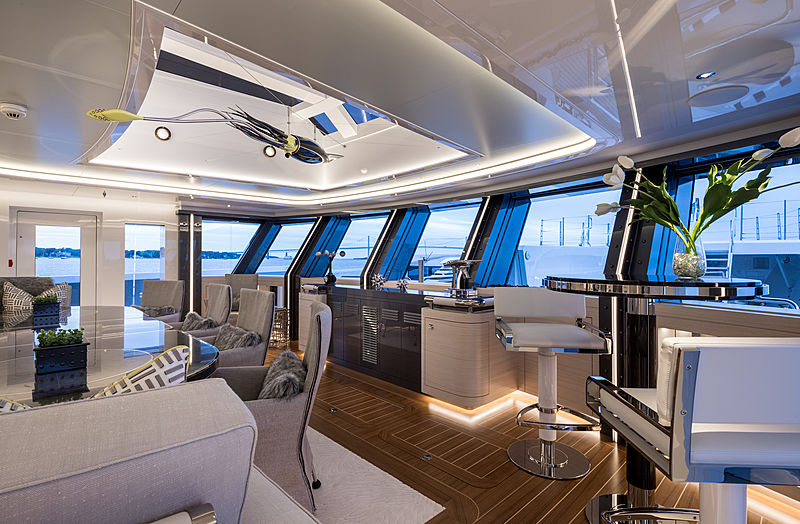 Photo: Jeff Brown / Breed MediaThis trippy effect is echoed in the gravity-defying coffee table that is best described as a sculpture more than anything else. A water drop from above is frozen in time, creating a captivating ripple effect with the immaculate polished stainless steel surface catching the blue light from the screen above. Continuing the industrial theme that is so evident throughout, the TV cabinet is hidden behind a 3D-printed world map that slides open by turning two large wheels. Engraved above this piece is a quote from the Untold Want, which features prominently in the Academy Award-winning 1942 film Now, Voyager. The lounge opens up onto the main deck aft where a spacious gathering area with L-shaped bar and a family-sized dining table can be closed off from the elements via seamless glass sliding doors for use even in colder climates. 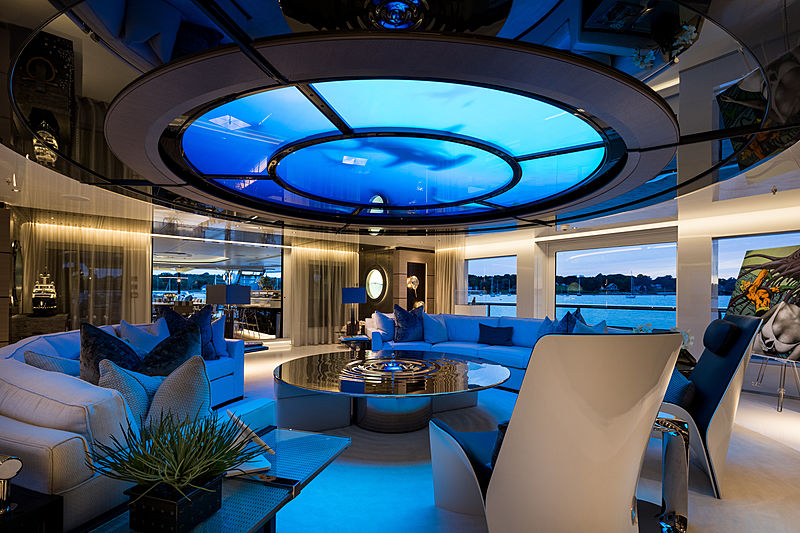 Scout carries two eight-metre tenders on her foredeck which are protected from the elements thanks to the raised helicopter landing pad at the bow. The most impressive of all tender craft on board is surely the convertible limousine by Cockwells in the UK. Finished in the same sunshine yellow and pewter grey colour scheme as her mothership, this high-tech T/T Scout is designed to carry up to 10 guests and two crew members, running at a top speed of 37 knots in the comfort of a luxurious temperature-controlled cabin. The tender’s innovative SMARTGLASS roof slides open for a fresh-air experience or can be closed and tinted with a touch of a button to protect guests from the sun if needed. An easy-to-manoeuvre GPS joystick system makes for safe guest transfers and independently controls each engine in combination with the bow thruster which makes docking a breeze. 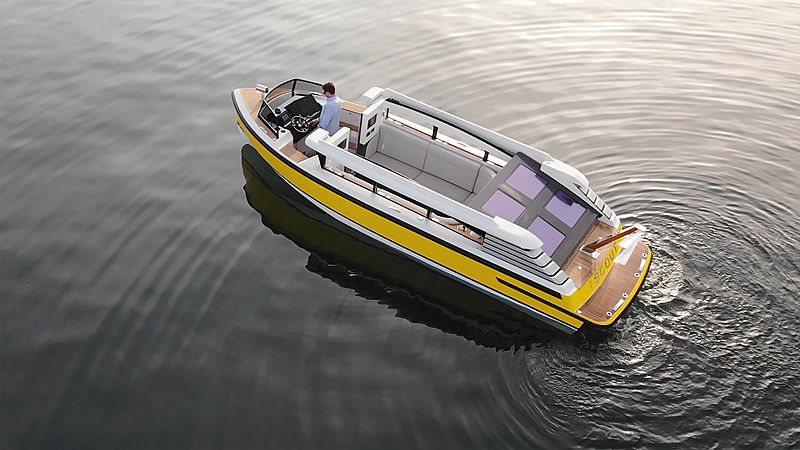 Video: Walk on board the 64m superyacht Scout