Home > News > On board the Azimut Magellano 25 Metri

Azimut’s line of ocean-going Magellano yachts became a hit amongst smaller boaters when it was first introduced in 2009. Defined by a turn-key configuration, the Magellano collection has been designed for the more adventurous owner and comes standard with an impressive cruising range and comfortable ride at sea. Features like these has always made this model stand out in the Italian builder’s otherwise go-fast lineup of performance yachts. Now, over a decade later, Azimut has revived this range with a new, larger addition that appeals to experienced owners who have come to love the comfort of the smaller Magellano models and were looking for even more space and amenities. 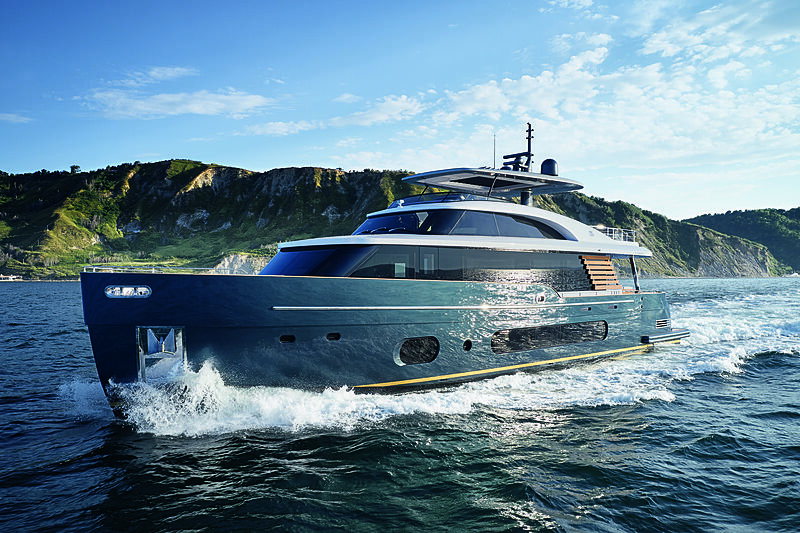 Photo: Azimut YachtsFor the Magellano 25 Metri, Azimut partnered with designer Ken Freivokh to create a timeless exterior that would stand the test of time, while also keeping with the familiar trawler style the line has become known for. Renowned for its composite expertise, Azimut applied Carbon Tech Generation solutions to the fibreglass construction of the yacht. Areas such as the flybridge, hard top and aft garage all benefit from carbon fibre lamination, increasing internal volume and adding to the yacht’s stability thanks to a lower centre of gravity. 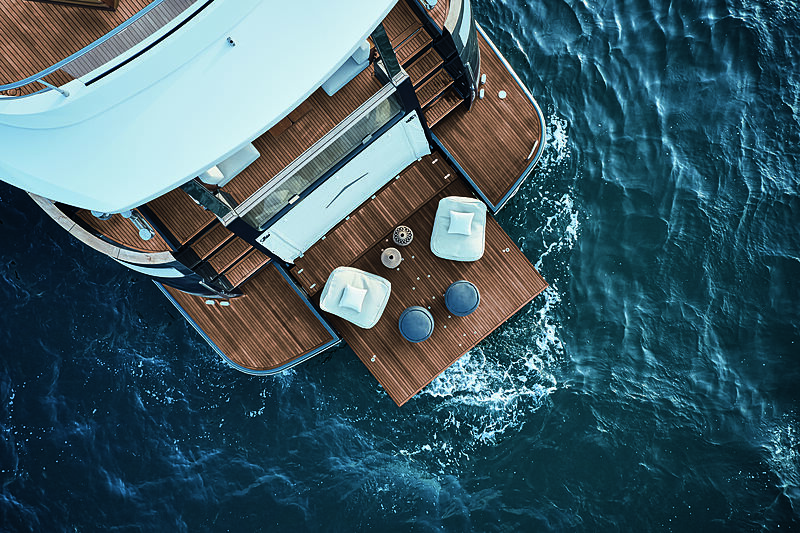 Photo: Azimut YachtsFurther elevating navigational comfort is the semi-displacement Dual Mode Hull on which the Magellano 25 Metri is built. A double chine design improves stability at lower speeds when the yacht operates with a larger effective beam, while at higher speeds, water interacts with a shaped lower chine that has been developed for less resistance and increased fuel efficiency. 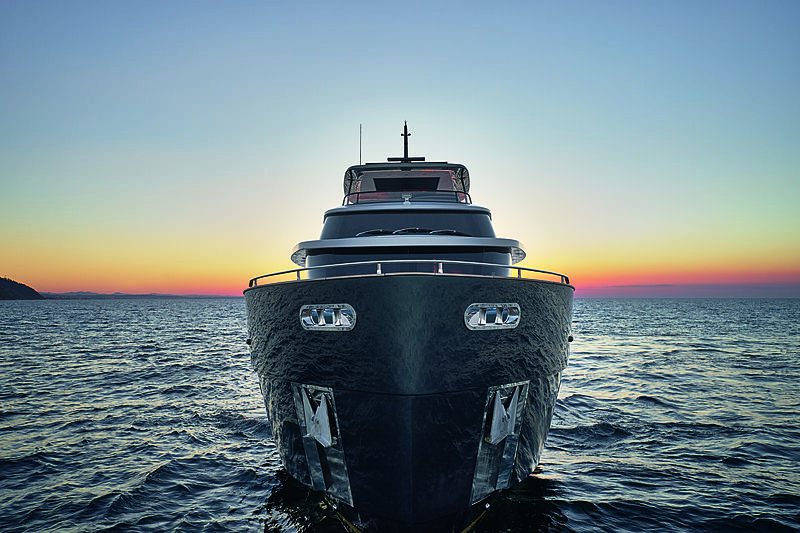 Photo: Azimut YachtsIntended for longer voyages at sea, real-world interior comfort was another focus point for the design team. Vincenzo De Cotiis worked with Azimut to create an interior layout that is multifunctional, minimalistic and above all, spacious. “Due to the limited space, I focused my design on perspective - I had to make the spaces seem bigger using interplays of mirrors and light, whilst also retaining the yacht’s power and form,” says De Cotiis. To promote that essential connection with the outdoors, a rectangular floor plan on the main deck draws traffic inside with a sculpted formal dining table taking centre stage. Reflective surfaces accentuate the geometric design of the space and play with the abundance of natural light that floods the main saloon. This chic theme runs throughout the entire interior including the four guest suites on the lower deck. 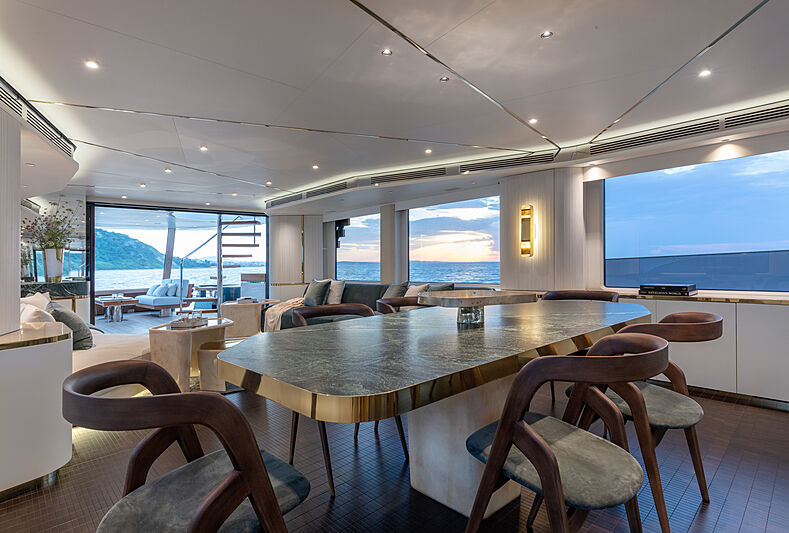 Photo: Azimut YachtsHere, guests will find two double VIP suites and a guest cabin with two single beds in addition to the full-beam owner’s stateroom located amidships and adjacent to the engine room and tender garage. The layout of the stateroom consists of an en-suite bathroom offset to port while the spacious cabin features a private built-in sofa and walk-in closet. 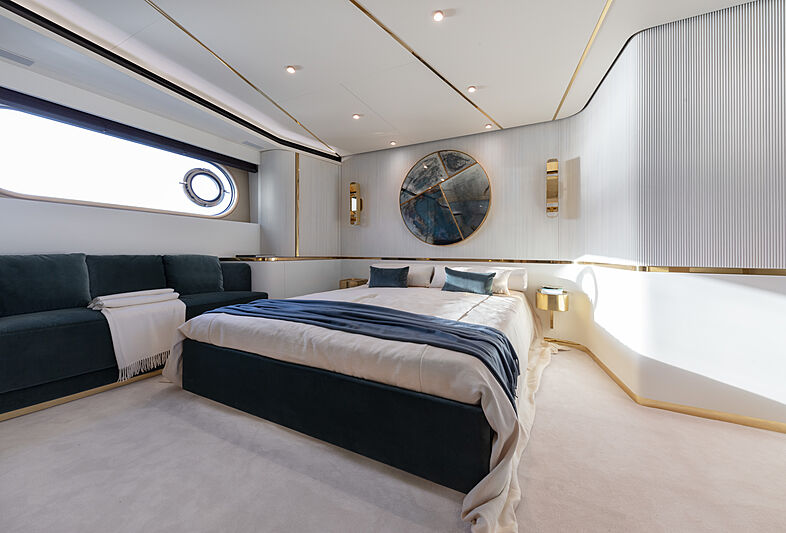 Photo: Azimut YachtsFrom the outside, the fully-glazed superstructure windows are what first catches one's attention. Freivokh created a retro look with a mix of rounded and hard-edged corners for that signature navetta style, ending with a near-vertical bow. An elegant spiral staircase connects the main deck aft with the fly deck above where guests can relax in the sunshine or under the central hardtop with its louver-style sunroof for a true Mediterranean al fresco experience. “Thanks to these features, Magellano 25 is a timeless, purposeful and elegant yacht, to be owned by seafaring customers who love beauty and the sea,” explains Freivokh. 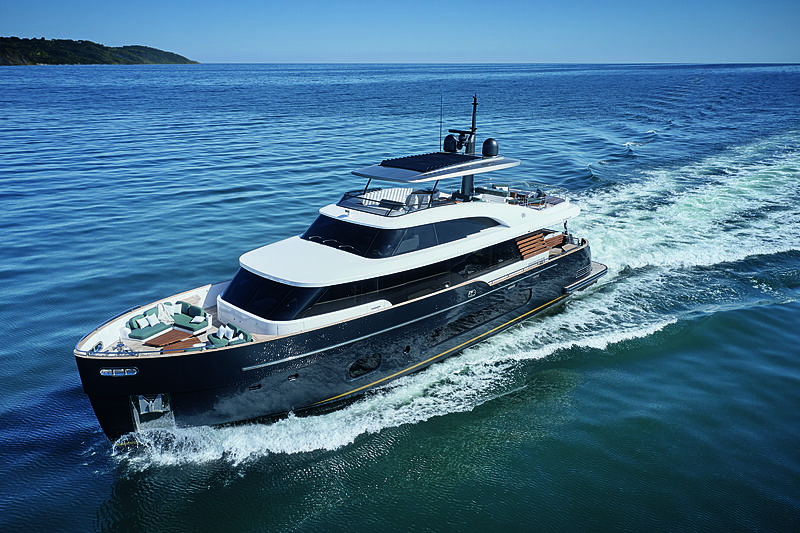 Photo: Azimut YachtsPerformance-wise, Azimut opted for a heavy-duty setup of two 1,400 horsepower MAN engines that is connected to the V-Drive in-line transmission, delivering a cruising speed of 18 knots and a useful top speed of up to 25 knots to get you back to port before nightfall. 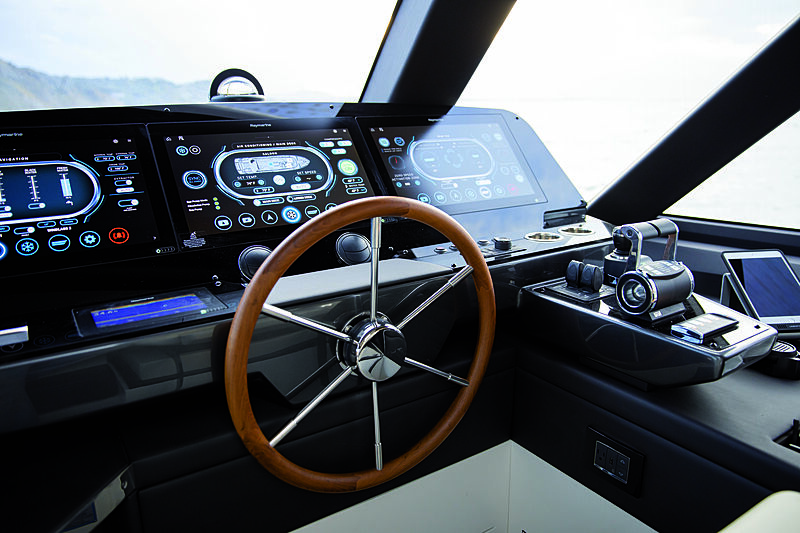 For the interior style of the Magellano 25 Metri, Artist Vincenzo De Cotiis extended the use of fibreglass in the yacht’s construction to the guest areas, where he used the material to sculpt prime pieces such as the dining table and chairs and smaller coffee tables in the main saloon. The artisanal process involved introducing bronze powder that produced a clouded effect similar to that found in certain precious stones. “The most significant area, which is also my favourite,” explained the designer, “is the main saloon because it best represents the depth we strived to reach. We tried not to impose physical limits and barriers on the gaze, but to let it wander all the way to the bow.” Other elements such as brushed Verde Alpi marble, polished brass and dark walnut wood further highlights this philosophy and stands in contrast to the bright deckheads and wall panelling found throughout. “I wanted to stimulate the senses. I wanted touch, sound and, of course, sight to be as involved as they are during the interpretation of an opera. This is why I chose materials that create powerful new tactile sensations.” 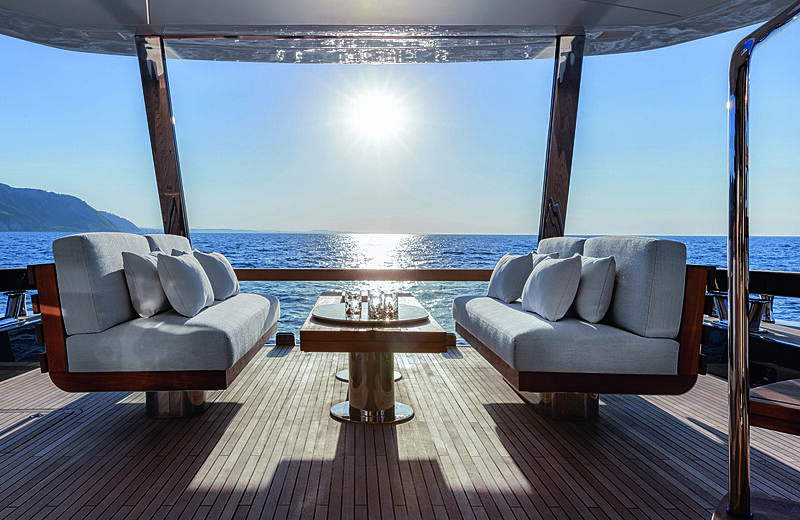 Photo: Azimut YachtsHome away from home

Perhaps best known for his work on the design of the super sailer Maltese Falcon, there is no doubt that Ken Freivokh put his own touch on this new Azimut model with its balanced design and enviable proportions that are indicative of a far larger yacht. Versatile outdoor spaces provide separation during those longer voyages yet retains an undeniable flow that makes the Magellano 25 Metri a real bluewater companion for families big and small. “The Magellano 25 Metri is a ‘live aboard’ yacht, to be enjoyed in all weather conditions while exploring new destinations,” said Freivokh. “This model is ideal for long cruises and is made for those who want to experience the sea for a long time which is, indeed, the ‘raison d’etre’ of the Magellano collection." The open foredeck arrangement is a social hub on its own, with two generous inward-facing sun lounges that can be enjoyed at just about any time of the day. An ‘infinity terrace’ on the main deck aft invites guests to enjoy this often underused space that overlooks the swim platform and beach club below. 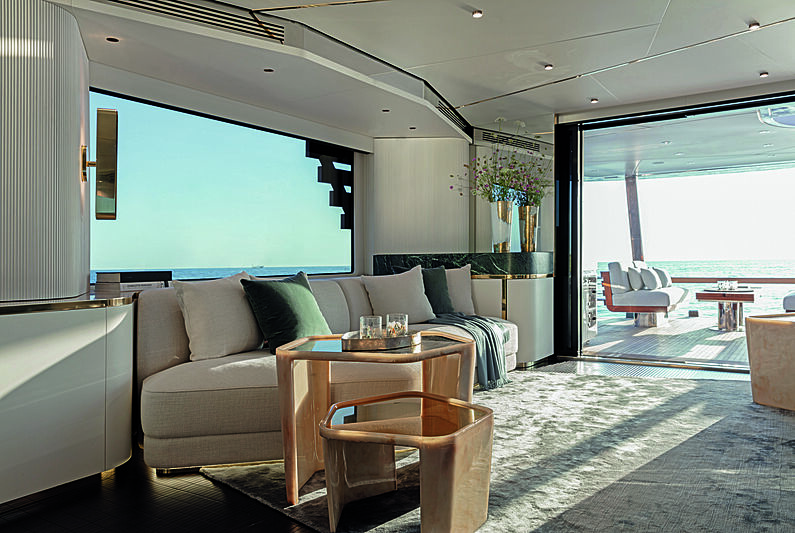 With an in-house Innovation Lab always on the lookout for guest-centric enhancements to implement in its new models, the Azimut Magellano 25 Metri comes with a BCool active sanitising system. Not unlike the same technology used in NASA spacecraft, this air exchange system ensures constant through-air circulation on board and eliminates harmful microorganisms from the yacht’s environment. Another out-of-sight feature that adds to guest comfort is the yacht’s ‘hotel mode’ which can shut off the yacht’s emissions completely for up to eight hours while guests are aboard. In this mode, the hotel load is powered by a dedicated lithium ion battery pack and provides a silent and environmentally friendly eco-system, not only providing peace of mind but also allowing the yacht to operate in marine sensitive areas. 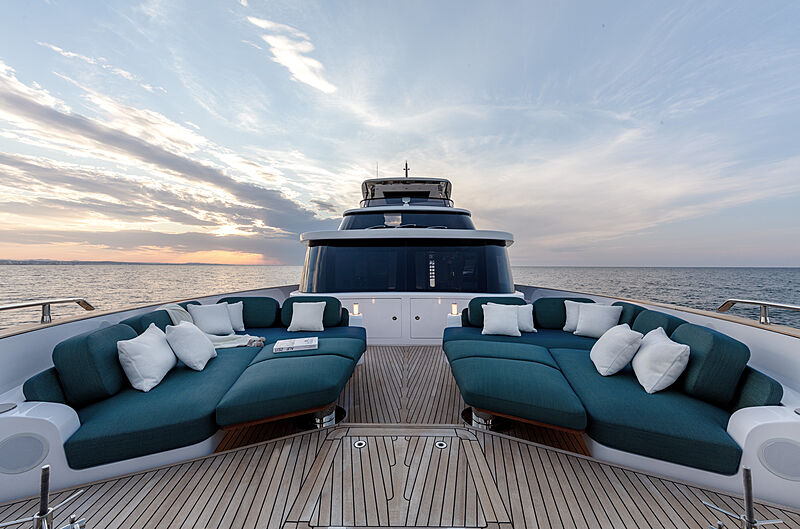 Photo: Azimut YachtsThis article was originally published in the Summer 2021 issue of The SuperYacht Times newspaper. To receive all future issues straight to your door, subscribe to the newspaper here.

On board: New pictures of the 42m explorer yacht Crowbridge