It would certainly be a mistake to overlook the 37.83-metre Emocean, the first yacht to come out of one of the newest superyacht shipyards to the industry, Rosetti Superyachts. This yacht, born from the current move toward what some are calling ‘pocket explorers’, another prime, current example being the pocket sized Arksen85, may be small for an explorer vessel, but stepping aboard her in Cannes showed her to pack a serious punch. 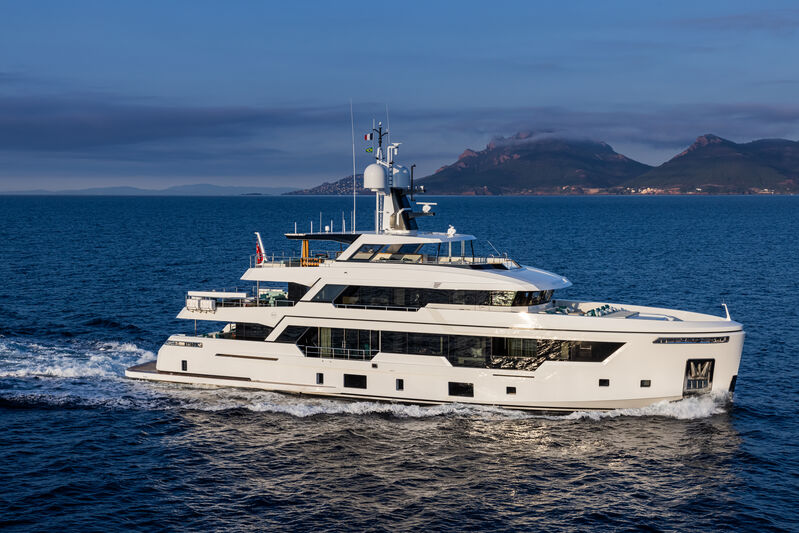 Photo: Alberto CocchiEmocean, of the RSY 38 EXP model, was launched in June, but her builders kept the project fairly low key. “We knew that unveiling Emocean at Cannes would be the perfect debut for this yacht. As a new name to the superyacht industry it is easy to be overlooked, but this yacht is truly the best business card we could have,” commented CEO Ermanno Bellettini. 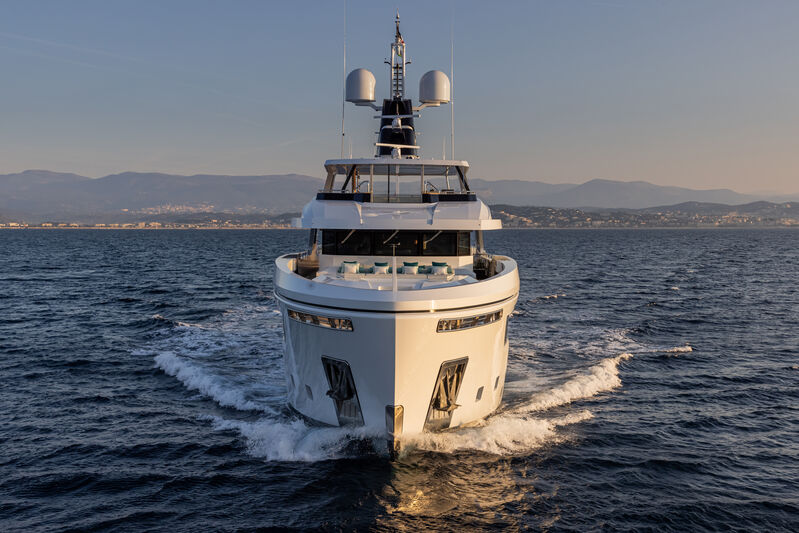 Photo: Alberto CocchiEvidently the team weren’t wrong, as only one day after the Cannes Yachting Festival the shipyard announced the signing of the first contracts for a 40-metre explorer, while in late August they had already announced that a second RSY 38 EXP was to be constructed.

Featuring exterior design from Hydro Tec, the yacht cuts an impressive figure. Her profile is accentuated by the dark glazing of windows virtually from bow to stern which are interjected with angled breaks in the bulwarks where full height windows illuminate the interior. A strong diagonal line cuts through the profile amidships, leading from her mast base to main deck bulwarks, lending the yacht a purposeful and forward facing aesthetic. 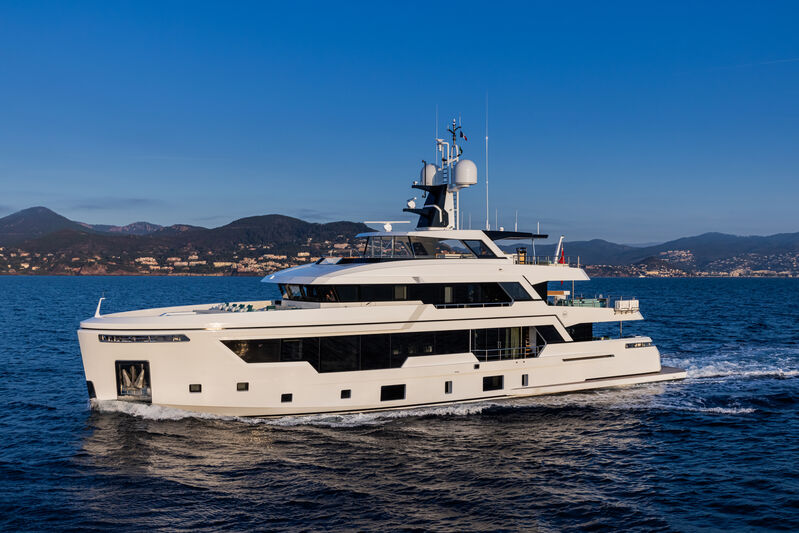 Photo: Alberto CocchiEmocean’s designers have not shied away from packing this yacht with clever and unexpected features. Particularly outstanding features include the tender crane, situated on the aft of the upper deck, which ingeniously transforms into a bar when stowed and has been crafted with a bespoke teak panel to blend into the surroundings and add an ergonomic feel. Another top feature is the fixed balcony of the master suite which seems to expand the space, but most of all the sundeck brings a wow-factor, with its glass backed infinity pool which looks out over the bow. The entire sundeck can be closed up and transformed into an interior space when in cooler climates, a nod to the yacht's impressive explorer capabilities and 5,000 nautical mile range. 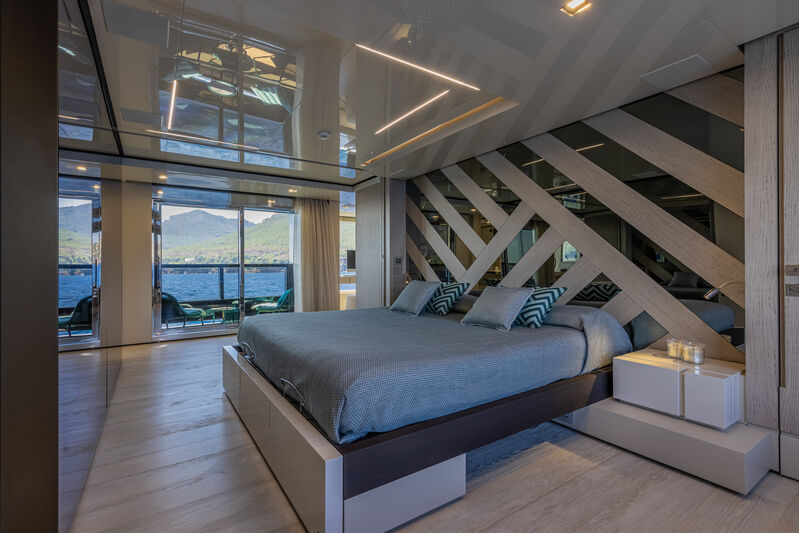 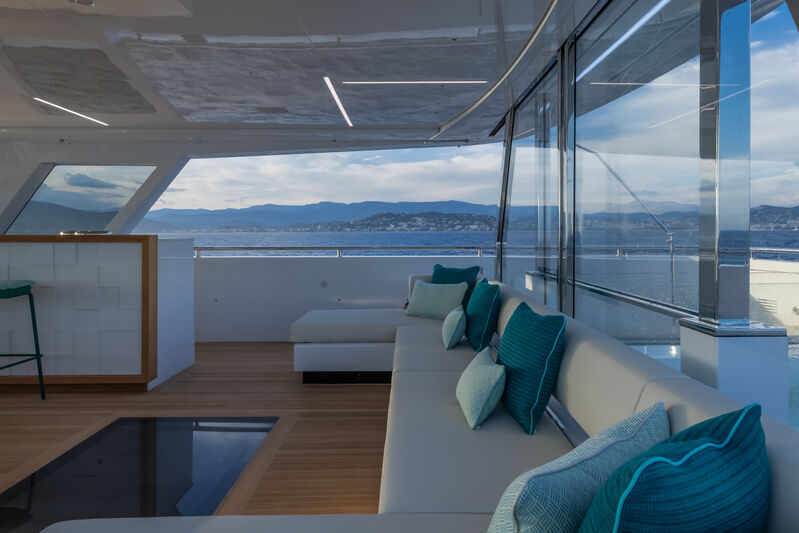 Photo: Alberto CocchiThe interior of this smart superyacht has been crafted by design duo Francesca Burdisso and Emiliano Capponi of BurdissoCapponi Yachts & Design. With a heritage behind them dating back to 2005, the pair were previously designers within the Ferretti Group, but founded their own studio in 2018. Emocean is the first yacht to come out of this impressive partnership and they have worked closely not only with the owner, but also with Rosetti Superyachts to understand the very fabric of the shipyard. 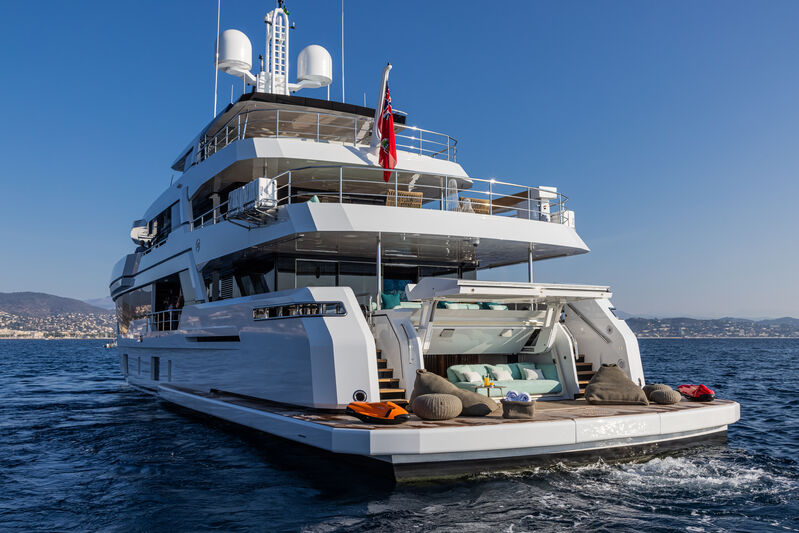 Photo: Alberto Cocchi“We are very grateful to Francesca and Emiliano who have embodied the Rosetti Superyachts mentality in their work on this yacht. They have been fantastic to work with, taking our concepts and truly understanding what we were trying to achieve. Emocean is a credit to them and to the team at Hydro Tec and the owner could not be happier,” stated Andrea Giora, Sales & Marketing Director.

Internally, the owner had clear ideas of how the yacht was to be organised and chatting to Francesca Burdisso, it was an exciting project to see come alive. One of the most standout elements is the central stairwell, which for Francesca is the heart of the design. This space is flooded with light due to the glass floor to the saloon above, leading right through from the sundeck to the lower deck, all of which illuminates a focal central sculpture. This sculpture was central to the yacht’s interior design, which BurdissoCapponi drew much of their inspiration from. The bronze figure of the sculpture is suspended in the air, which precisely captures the feeling of standing on the glass floor with glass above your head, able to see the sky two decks above. 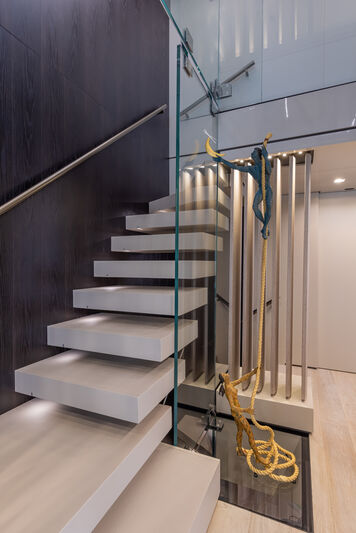 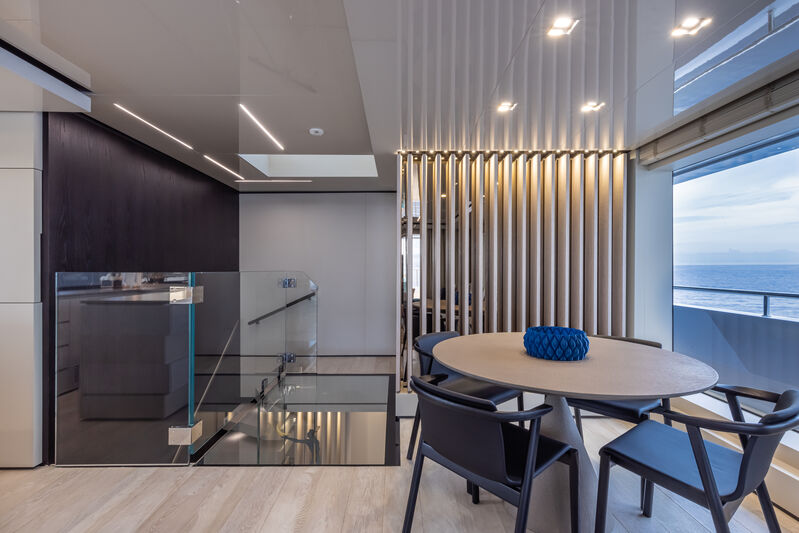 Photo: Alberto CocchiTo the aft of the stairwell is a glass walled wine store, able to hold 150 bottles, again a specification of the owners. The bottles are reflected in the mirrored ceiling overhead which leads the eye into the main deck saloon, a mature zone with dark smoked Oak wood walls and cream sofas from Moroso Gogan. 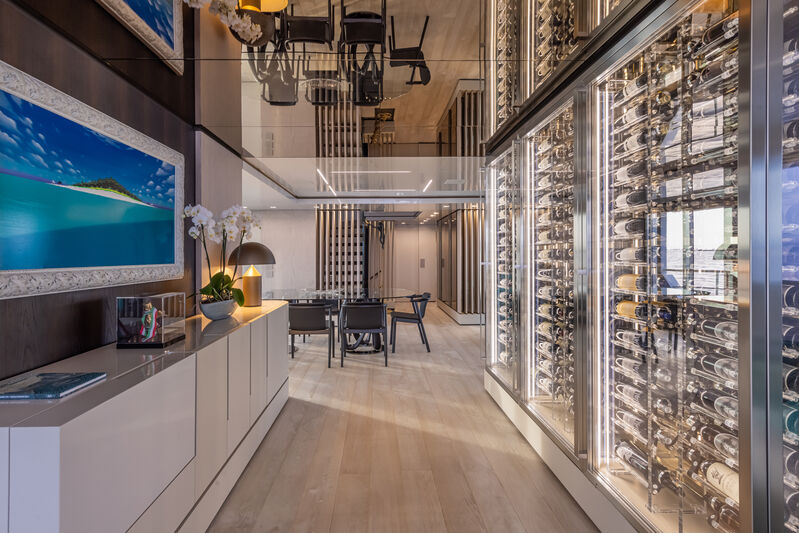 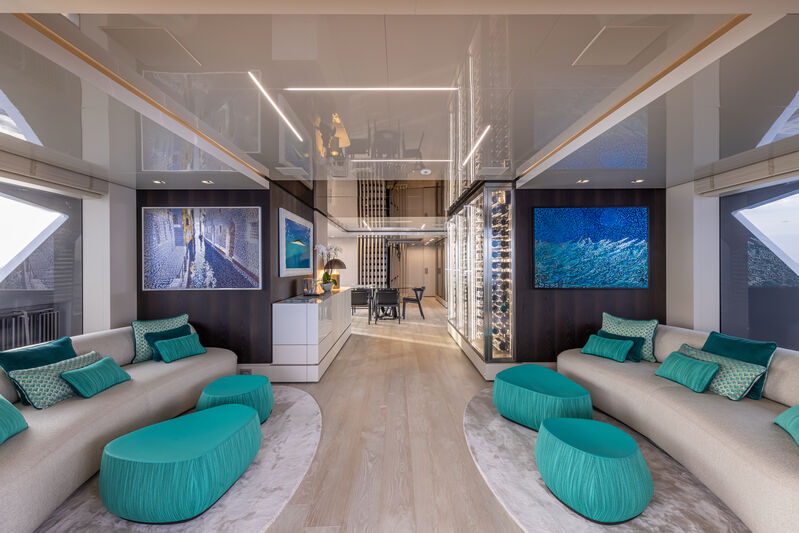 Photo: Alberto CocchiIf you follow the resin covered steps to the upper deck, guests are greeted with a more relaxed second saloon. Here Moroso Highlands sofas feature, but now take a more prominent place with the focus on a large TV, with Lema Ortis coffee tables accompanying the comfortable chairs. To the fore an entrance to the wheelhouse is found, or a doorway to the side deck which leads to a large foredeck, while to aft is a lounge deck area punctuated by turquoise Talenti chairs and the aforementioned crane-bar. 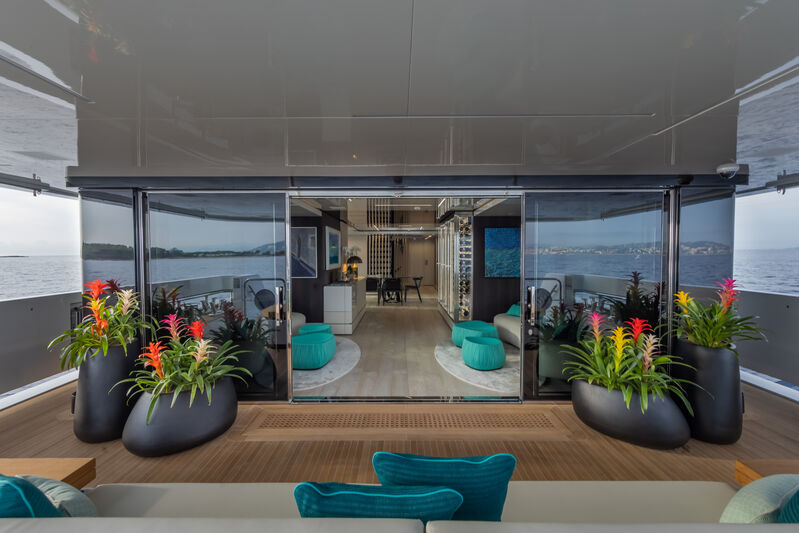 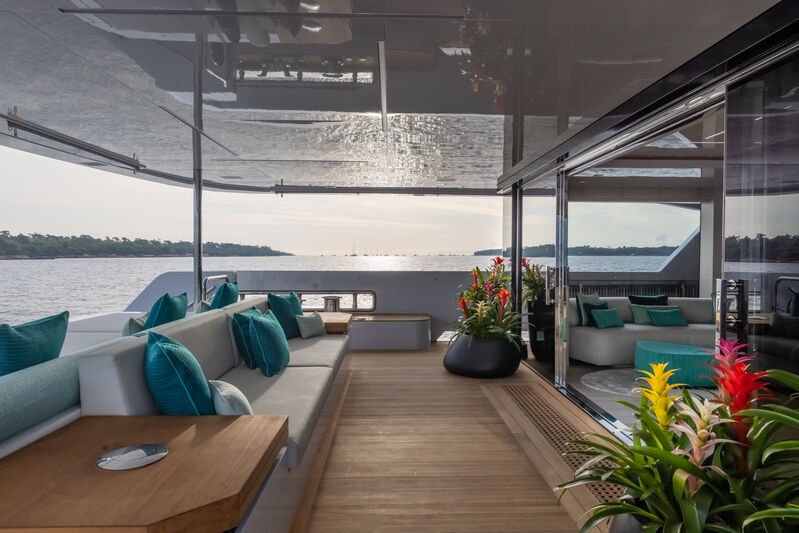 Photo: Alberto CocchiProbably one of the most surprising spaces of this yacht is the sundeck, featuring a monumental bespoke dining table which could seat as many as 12 guests and a marble topped bar with barbeque and all manner of ingenious storage spaces. 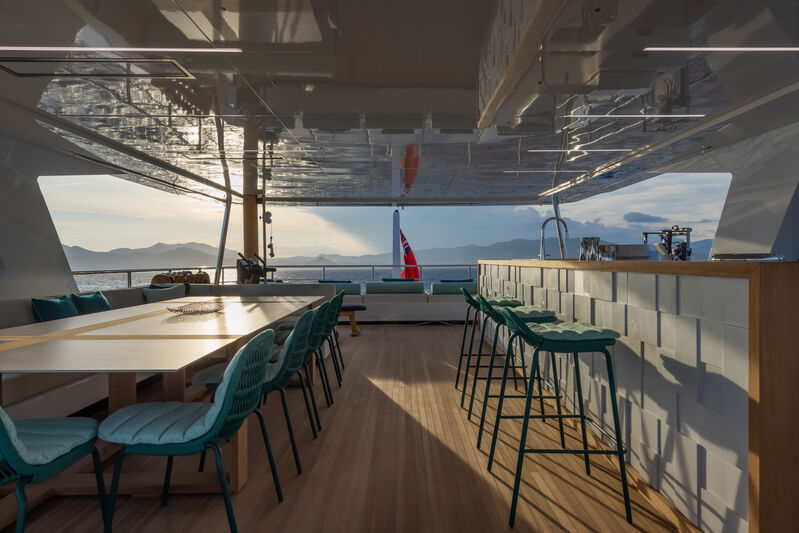 Photo: Alberto CocchiIngenious storage is another feature of Emocean, again a tip of the hat toward her explorer capacity. The main deck master suite has no end of cleverly placed storage, perfect for when packing for every possible weather. This space, which like the rest of the vessel has 2 plus metre ceilings, has a his-and-hers ensuite separated by a large central shower. The surfaces of the bathroom are topped in Silk Georgette marble with a brushed and raw finish which glints slightly in the light and mirrors the colour palette of the stateroom itself.

Photo: Alberto CocchiTo the starboard side is an office, which can be separated from the stateroom by a sliding door that splits the entire cabin from the entryway to the owner’s starboard side head. This allows the separation of the sleeping area from the living area, with access to the bathroom and the private terrace. Aside from this main deck master suite, four additional staterooms are located on the lower deck, two twins and two doubles, all with their own ensuites which are finished in Silestone Coral Clay. From a discrete door in the main lower deck corridor, the crew have direct access to the staterooms for servicing the cabins and the crew areas themselves are finished to a comfortable standard, again with 2-metre head height. 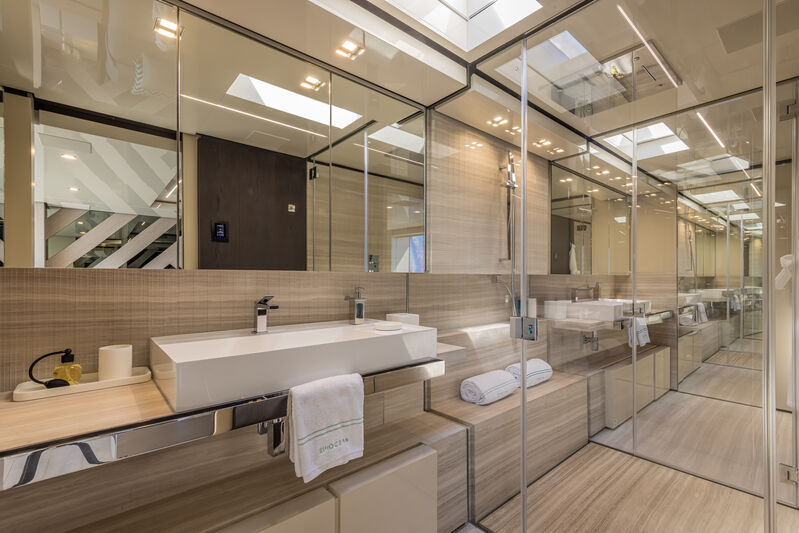 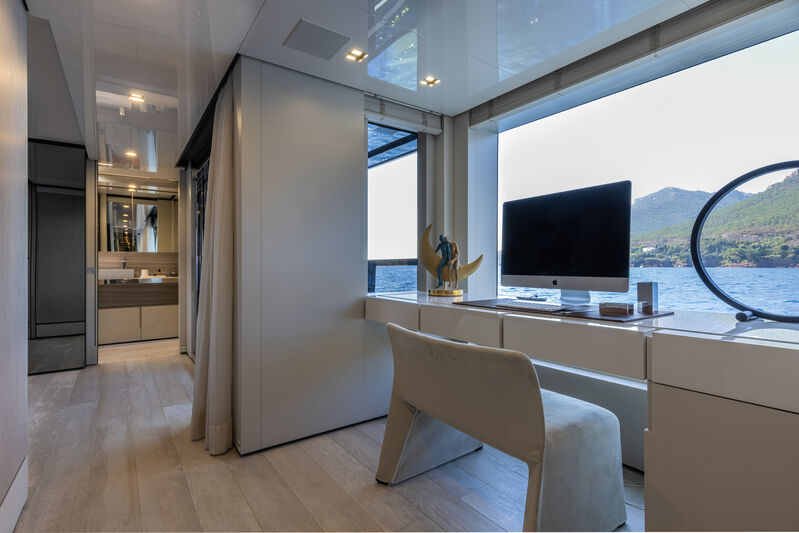 Photo: Alberto CocchiFor Francesca, the best part of the yacht design has been the creation of transitional spaces, which lead the guests from one distinct zone to another. Stepping off the gangway of Emocean I took away a sense that I had been aboard something special. Rosetti Superyachts may be a new company, but their heritage dates back to 1925. Forged from a commercial shipyard in San Vitale, the historic yard already has a fantastic reputation, and it is clear that their experience and expertise has been honed in the construction of Emocean. We can expect big things from this shipyard in the future and I look forward to their development of the latest 40-metre model in coming months. 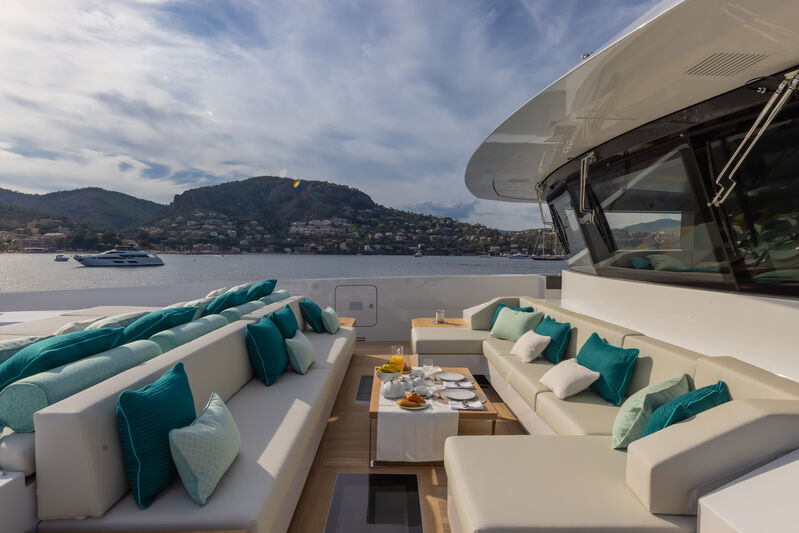 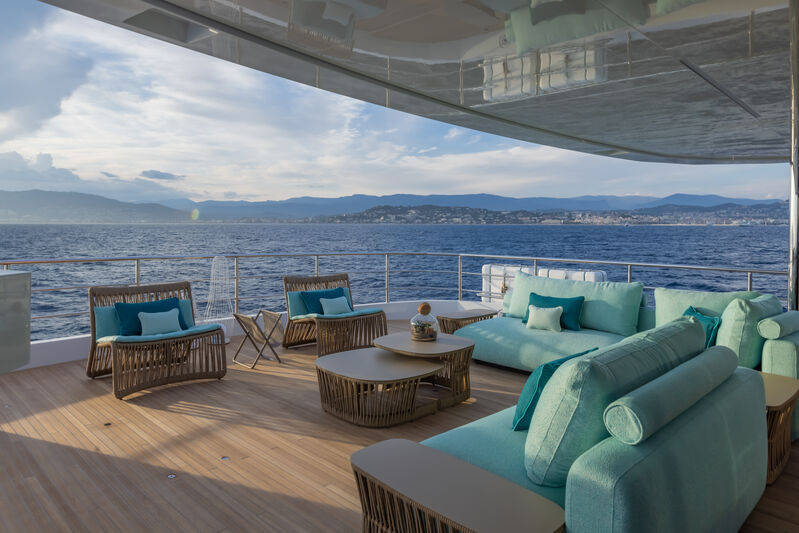