Over the past few years, Benetti has consistently unveiled a new 60-metre superyacht in one form or another under its growing new ‘Custom’ line of superyachts. Think 11.11, Seasense, Spectre, and now, Metis - each completely distinctive in its own way but with a strong sense of Benetti style that is evident from almost any angle. Created from scratch by Benetti together with Giorgio Cassetta as exterior designer and Bannenberg & Rowell in charge of the interior design, Metis may have been conceptualised with no set owner in mind from the word ‘go’, but be aware, this superyacht is set to decrease the gap between the worlds of spec and custom yachting even further. 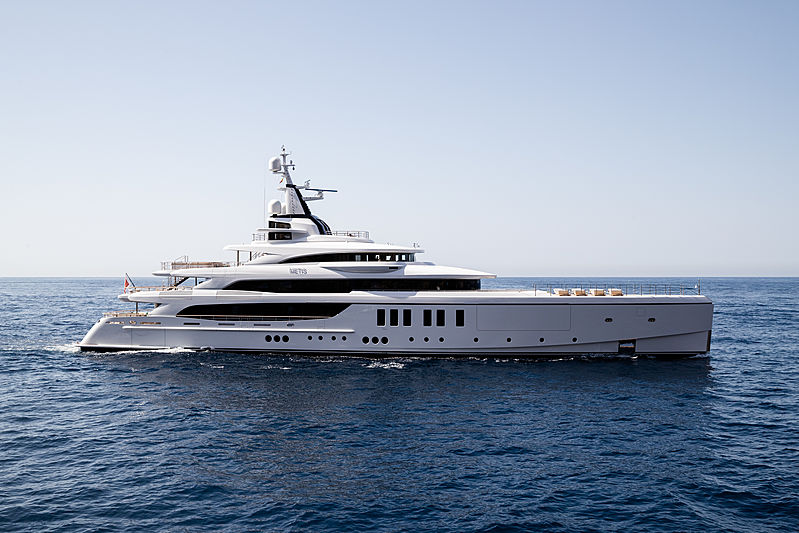 Photo: Jeff Brown / Breed MediaA speculative project as it may seem, Benetti was not holding back with FB 276 and gave free rein to the two design teams to push the boat out and be true to their own styles, yet with a somewhat all-inclusive approach, as Dickie Bannenberg explains. “We do take a bold approach, even with shipyard ‘speculative’ projects. We maintain that large yacht projects should appeal to a client who wants something different, non-generic, yet not so controversial that it becomes hard for the shipyard to find a buyer.” And considering the success that both Bannenberg & Rowell and Cassetta have achieved on the spec market (think Heesen’s semi-displacement for B&R and Benetti’s Mediterraneo and Delfino ranges for Cassetta), this combo starts looking like an even better match. 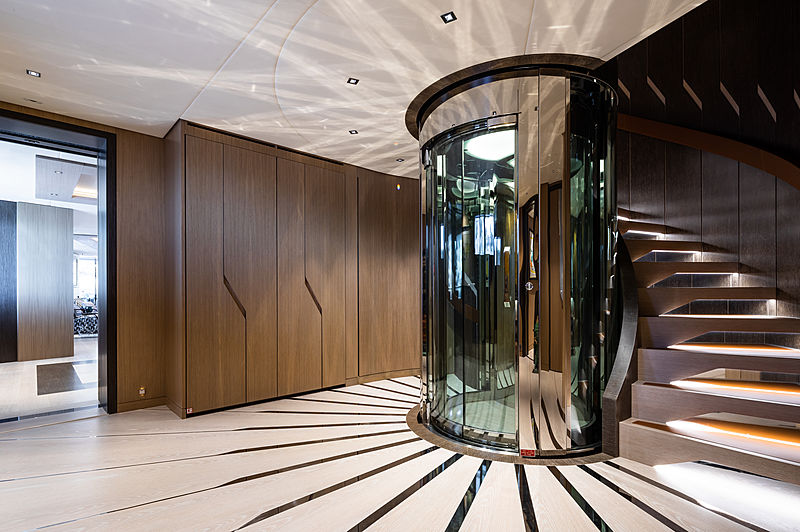 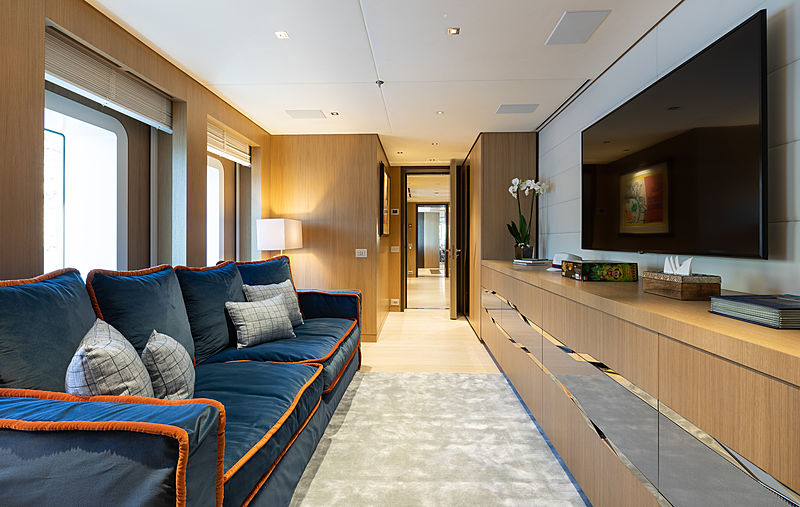 Photo: Jeff Brown / Breed Media“We were asked to create a gentle, elegant styling that would appeal to experienced yachtsmen around the world,” begins Cassetta. Interior volume has been maximised with a distinctive straight bow shape and perfectly flush foredeck which doubles as Metis’ touch-and-go helicopter landing pad for a recognisable style that belongs to the Italian builder. “The design is simple, yet characteristic of Benetti.” And simple it may seem at first, but Cassetta planned each curve with painstaking detail, studying each angle to not only form a holistically elegant shape, but also to add to the overall guest experience of each individual. The sun lounging area ahead of the owner’s suite on the upper deck, for example, seamlessly disappears out of sight as you stand on the bridge or sundeck forward area, providing maximum privacy no matter where you are on board. “The glass and dark surfaces are, in contrast, all vertical and linear, thus creating the feeling of a central supporting structure around which the white-painted volumes almost become pure decoration,” comments the designer. 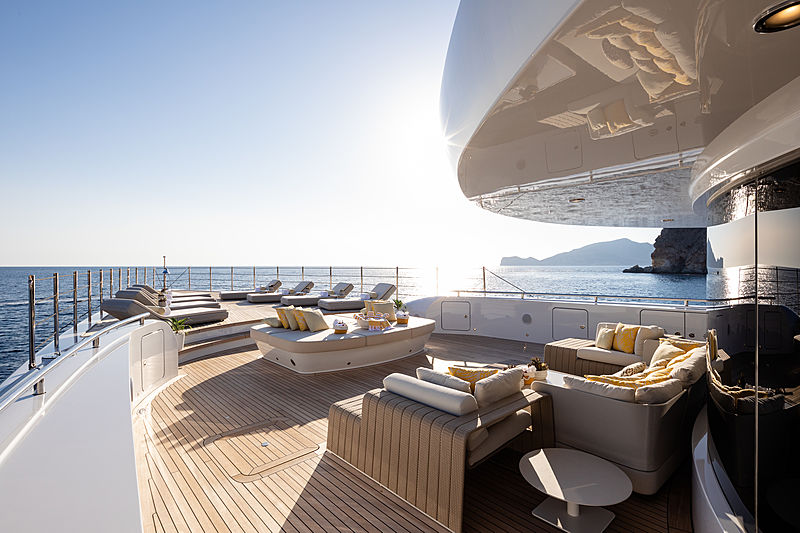 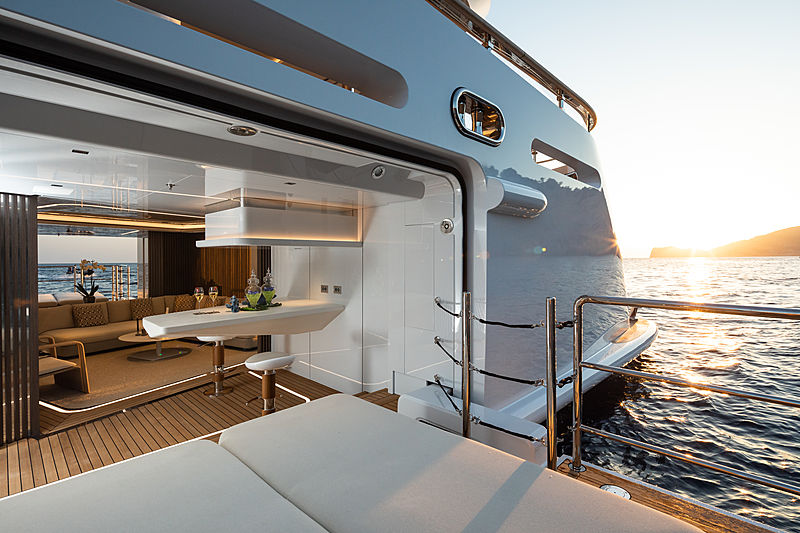 Photo: Jeff Brown / Breed MediaWorking together with the owner’s interior decorator, Birgit Otte Interior, Bannenberg & Rowell tweaked the interior schemes to suit the German owner’s taste whilst retaining their signature quirky style with bold and geometric shapes. The grand spiral staircase that connects the lower deck to the bridge deck three levels above is just one such example where stainless steel inlays on the floor and inside the steps themselves create a kaleidoscope effect as you make your way upstairs. This is echoed in the stainless steel bed frames and loose deck furniture. The metal accents are complemented by a contemporary range of wood finishes using varieties such as smoked oak and even carbon inserts that fit the automotive elements that Cassetta introduced in the exterior design: a partnership Cassetta describes fondly. “I am truly grateful to Dickie Bannenberg, Simon Rowell and their team for having managed to bring everything that was good on the Metis layout to its best. The now-famous angled theme that spreads through Metis' interior has created a cozy environment with soft, earthy hues that is luxurious in the details without being visually aggressive and contributes to a seamless transition between the inside and the outside.” 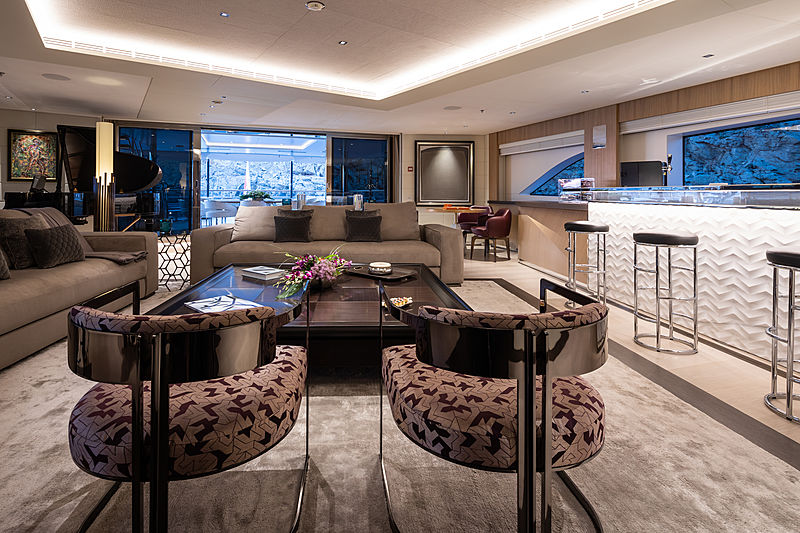 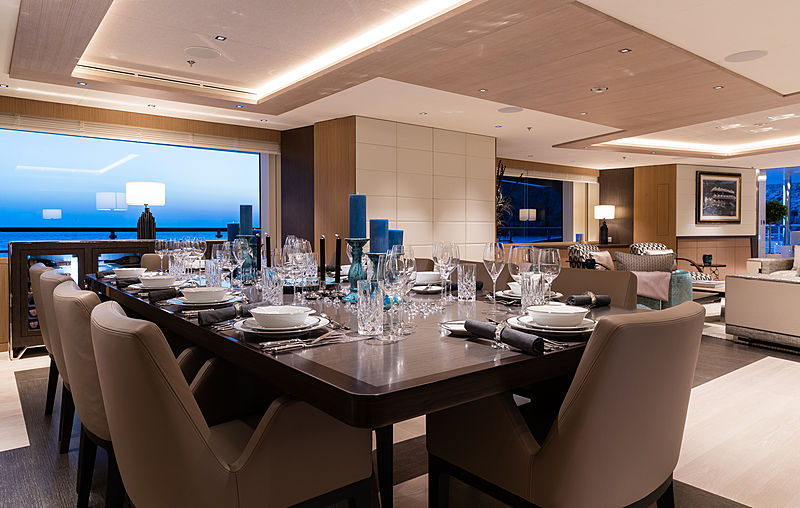 Photo: Jeff Brown / Breed MediaUnmissable as you enter through Metis’ main or upper deck saloons is the surprising layout that challenges the conventional boxed-shape setups commonly found in these areas of a yacht. “We added a literal twist to the space,” explains Bannenberg, “by rotating the central room.” And by spinning the entire room by 30 degrees, B&R ended up creating separate areas around the central arrangement which further opened up the possibility for out-of-the-box setups. “It allowed us to achieve a more relaxed arrangement and rather than trying to tie this shape into one space, we decided to embrace the separate zones.” The upper deck saloon, for example, consists of three smaller niches that surround the central lounge/cinema setting with a games/children’s table, American-style bar and grand piano each in its own corner. Although a conventional setup would have been able to accommodate the same amenities, you can’t help but think that this offset arrangement feels that little more organic and user friendly. 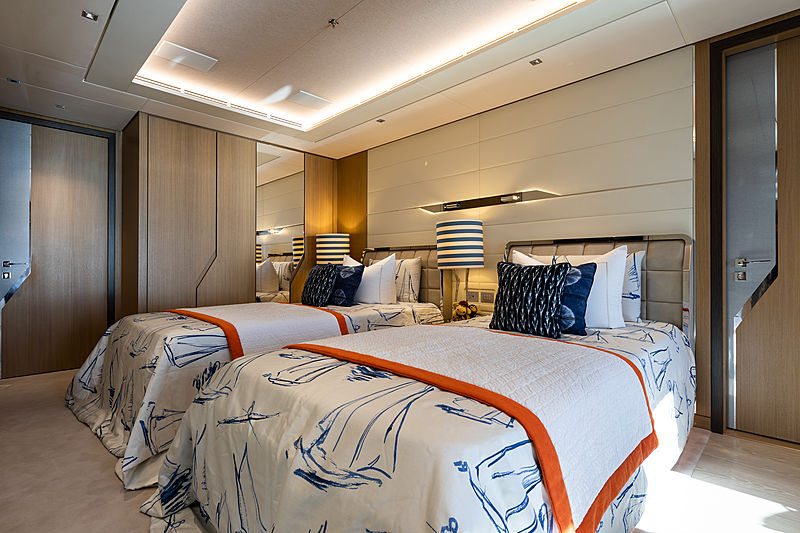 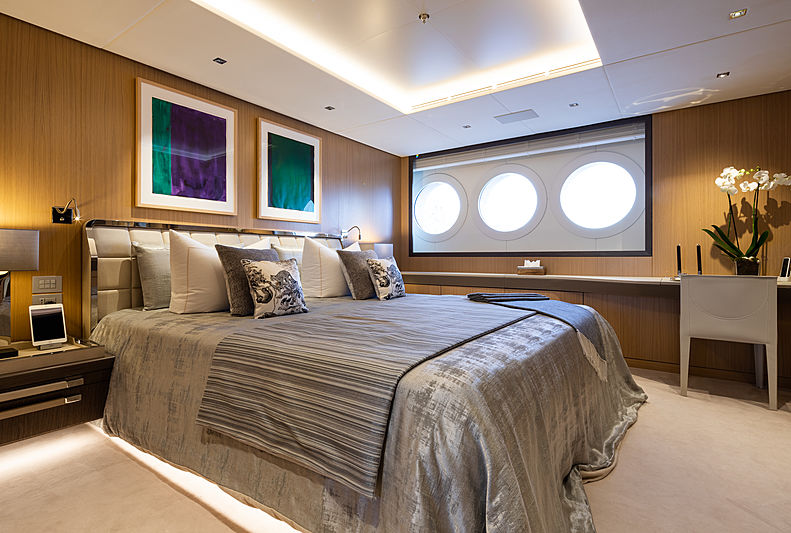 Photo: Jeff Brown / Breed MediaAfter designing an interior to what essentially was their own brief, Bannenberg & Rowell continued to work with the proactive owner to adapt certain areas on board that would suit the Metis lifestyle. Key amongst these were the VIP and master suite layouts on the main and upper decks. Firstly, the owner’s 162-square-metre apartment on the upper deck had to be divided into two identical master cabins with the forward-facing version enjoying the splendid views provided by the wrap-around full-height windows. On the main deck, the prime forward full-beam suite too has been divided into a children’s paradise. Starting on the starboard side is a dedicated playroom that runs perpendicularly with the centreline and leads into a twin-bed children’s cabin which can be merged to make a double bed VIP suite. Connected to this is the nanny cabin, possibly the most luxurious of its kind on any yacht, set in a location which could easily be dedicated to a master suite. “I’m going to guess that this cabin has the only fold-down balcony amongst sea-going nannies,” notes Bannenberg.

View from the top 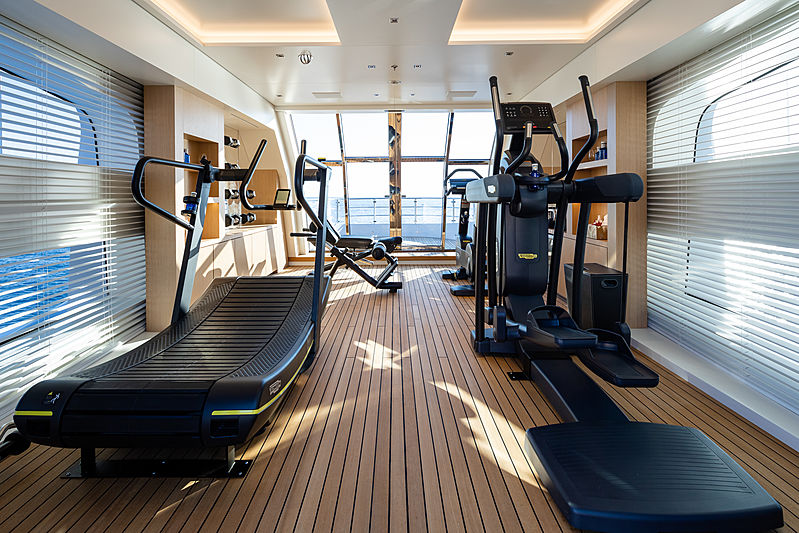 Perhaps the most customised addition to the project’s preliminary arrangement is the enclosed gym located on Metis’ topmost deck. Working together with the owner’s representative Kurt Lehman from Yacht Moments, Cassetta turned around this request together with Benetti in double-quick time. “The owner stepped in about twenty months before delivery,” explains Cassetta. “He loved and respected the project as originally designed, but nonetheless challenged us with creating an extra deck on top of the boat that would include a proper gym. We decided to conceive the new volume as a large mast rather than jeopardising the original design with an extra tier of superstructure.” Gyms on board often appear to be an afterthought for the occasional workout if the mood strikes. Not on Metis, though, where aspects such as natural ventilation and ceiling height above the skill mill and elliptical trainer were considered. There is even a forward-facing balcony if you want to take your workout outside or use it to simply catch your breath in between sets. 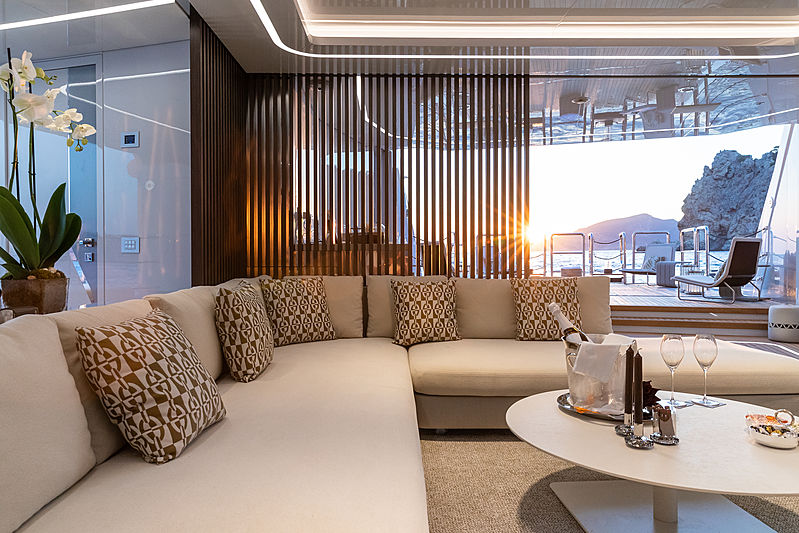 Photo: Jeff Brown / Breed MediaBeing provided with a three-way-opening beach club arrangement, Bannenberg & Rowell decided to utilise this open space to create a beach club that suits its close proximity to the water’s edge. “When you consider how beach club spaces can often be compromised in terms of daylight and engagement with the sea, feeling neither beachy nor clubby, we wanted to create a cosy room on the beach that we call the beach ‘cabana’." This ‘cabana’ Bannenberg refers to is the same rotated-room order as found in the saloons above. A central lounge area forms a focal point that is perfect for end-of-the-day social gatherings or simply staying connected with the watersports activities going on outside. At the same time, it was not the easiest layout to work with – having to deliver a T-shaped room with at least 3 traffic routes (two side balconies and aft swim platform entrance), when considering the additional AV equipment, bar area, lowered ceiling for the passerelle box, and engine room lobby forward of the bulkhead. But B&R pulled it off, creating one of the most tranquil and spectacular areas on board that that changes mood throughout the day as the sun sits lower in the sky by each passing hour. 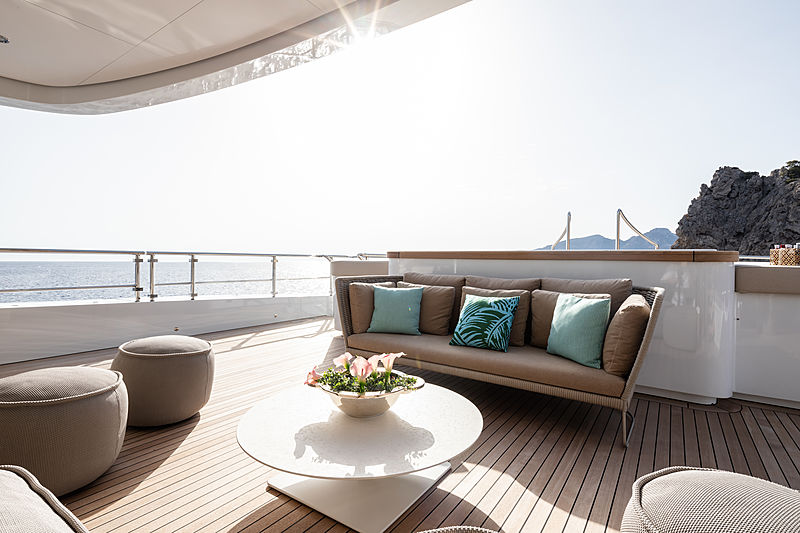 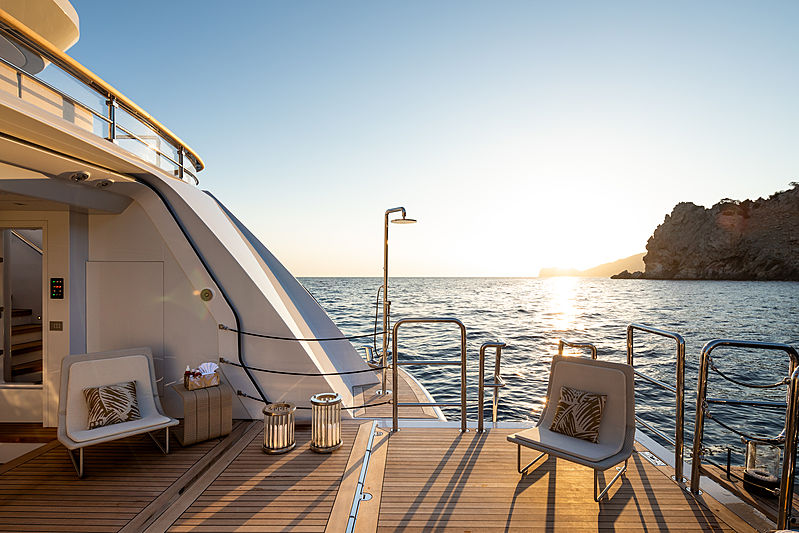 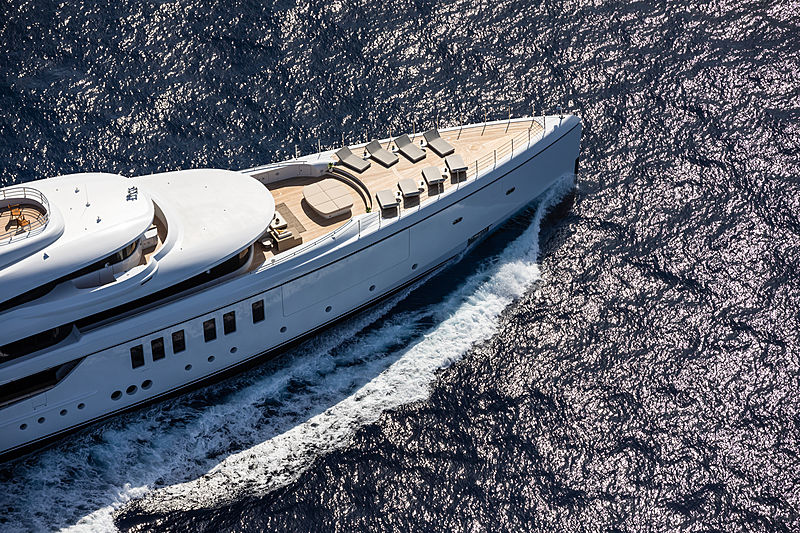