Home > News > On board Abeking's superyacht spaceship: the 80m Excellence

At the 2015 Fort Lauderdale Boat Show, an experienced superyacht owner came across a rendering of a design that was to be the radical new joint venture between Winch Design and Abeking & Rasmussen. He fell in love, and the custom 80-metre design was to become the sixth in the series of his fleet of superyachts by the name of Excellence. 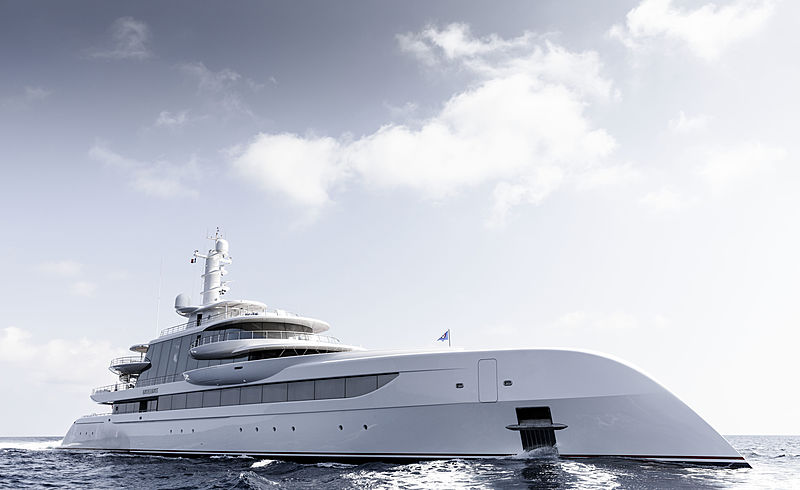 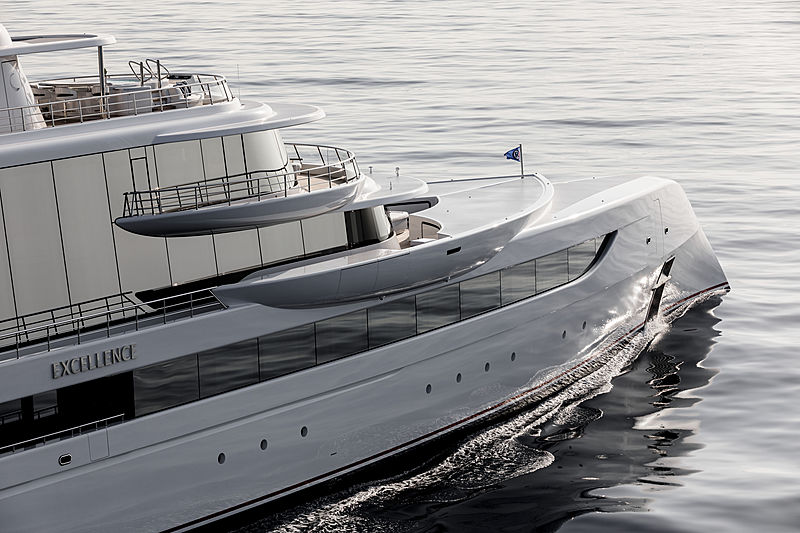 Photo: Guillaume Plisson / Abeking & RasmussenAs a repeat client of Abeking & Rasmussen, the American owner worked directly with the shipyard and its experienced in-house engineering team to harvest the interior and exterior designs of Winch Design and create one of the most modern and contemporary designs around. 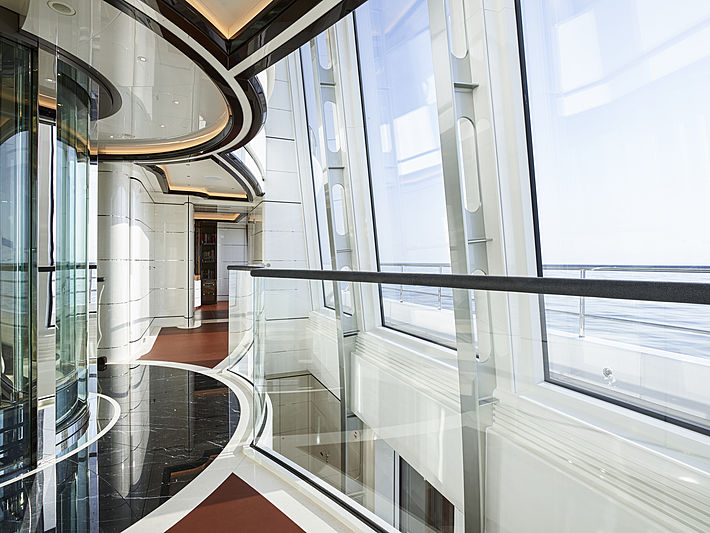 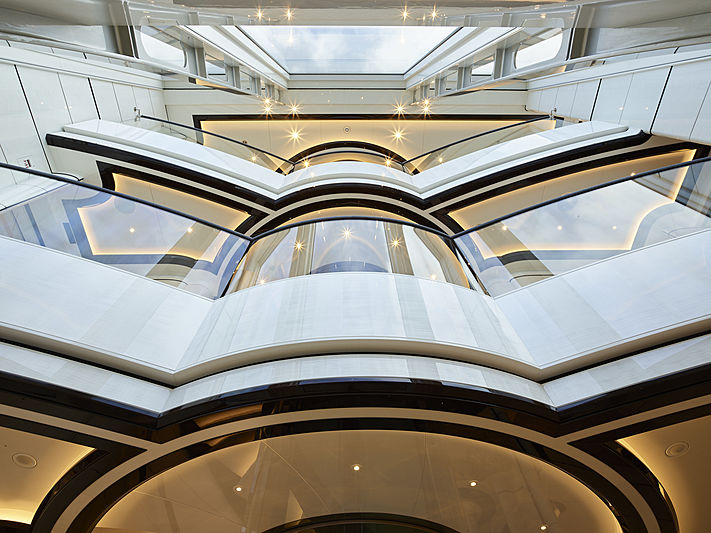 Photo: Michal BaginskiCharacterised by a sharp plumb bow, the unique superstructure of Excellence is fitted with a wealth of glass to create striking multi-level windows. Undoubtedly her signature feature, the glass spectacularly reflects her surroundings wherever she roams - a view that is left undisrupted thanks to the impressive engineering of a 25-metre line of perfectly smooth glass. 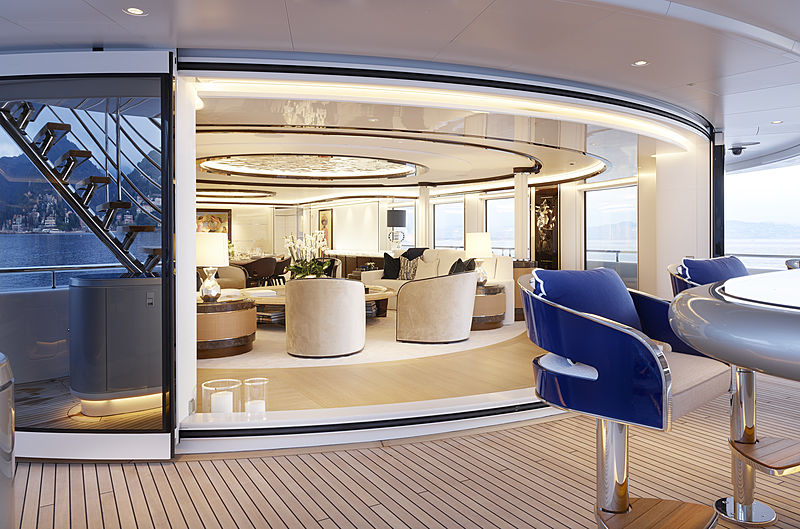 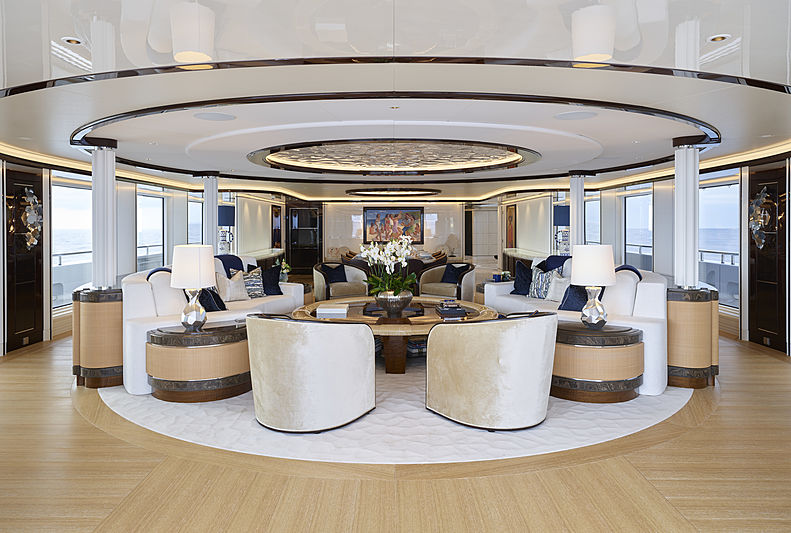 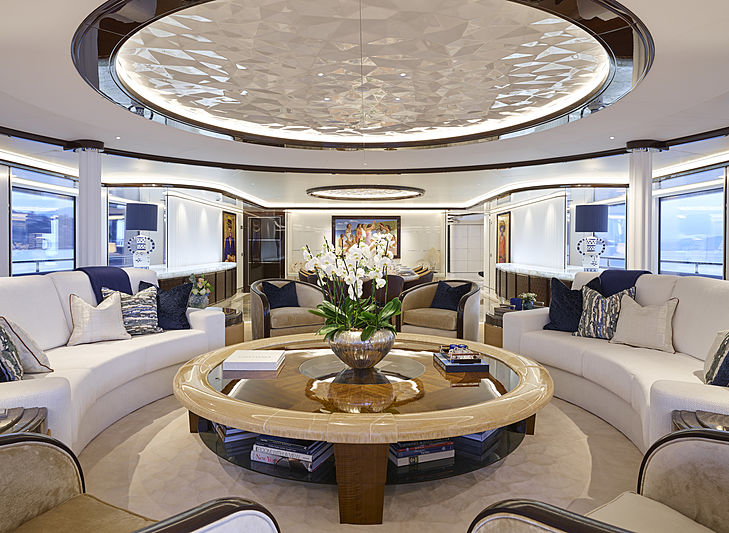 Photo: Michal BaginskiSix panes of five-metre-tall and 1.3-tonne glass panels form the external mirrored skin of Excellence. Supported by industrial-looking long steel beams that are best seen in the double-height atrium, the panes are 8cm at their thickest point and aid the yacht’s insulation capabilities to alleviate the use of the air conditioning system. The mullion fins are made of silver thread, woven in a way that mimics carbon fibre. These fins draw the eye in, then out, adding depth and a feeling of curvature to the spaces. 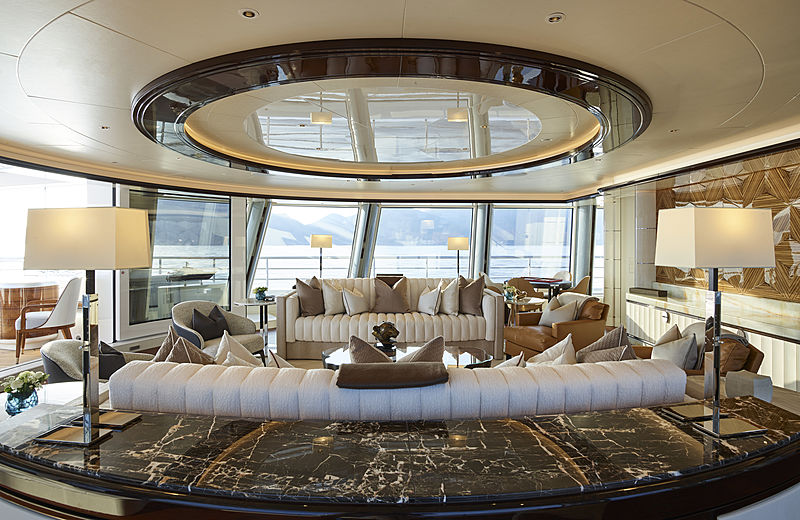 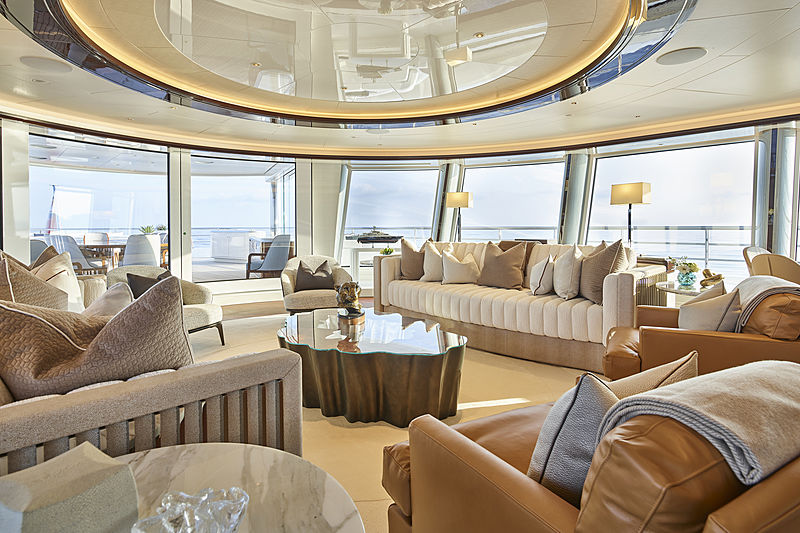 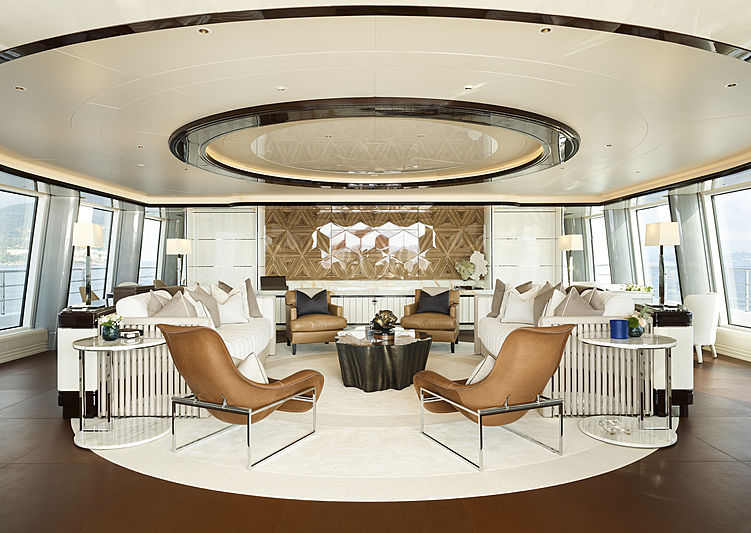 Photo: Michal BaginskiStating that the interior was not designed with charter in mind, the owner has infiltrated the design with his various passions. The interior takes cues from Floridian East Coast Deco, as well as from the details found in the owner’s impressive automotive collection. The owner’s love for cars stemmed from his successful career in car dealerships and references are found throughout the interior; for example, the delicate fin detailing inspired by the fanciful cars of the streamlined age. In the sky lounge, the backs of the deep, cream sofas take their inspiration from those found in a Cadillac. The sides of the sofa are made of soft shagreen embossed leather, with metal grille detailing on either side. 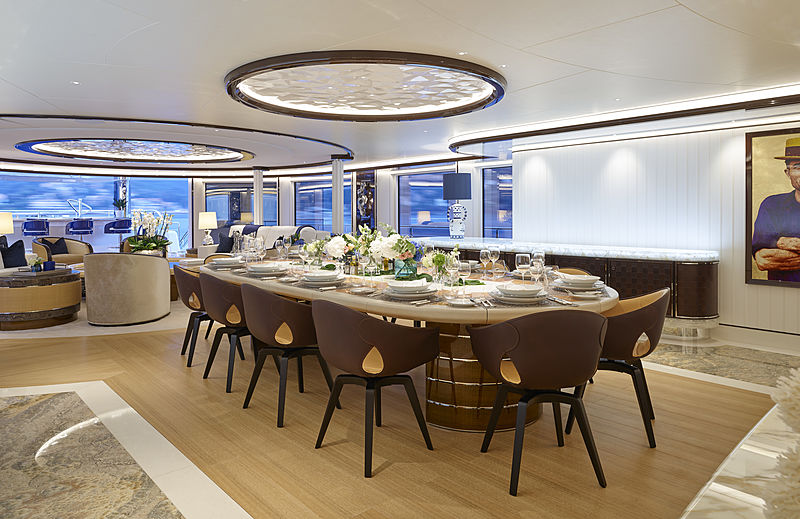 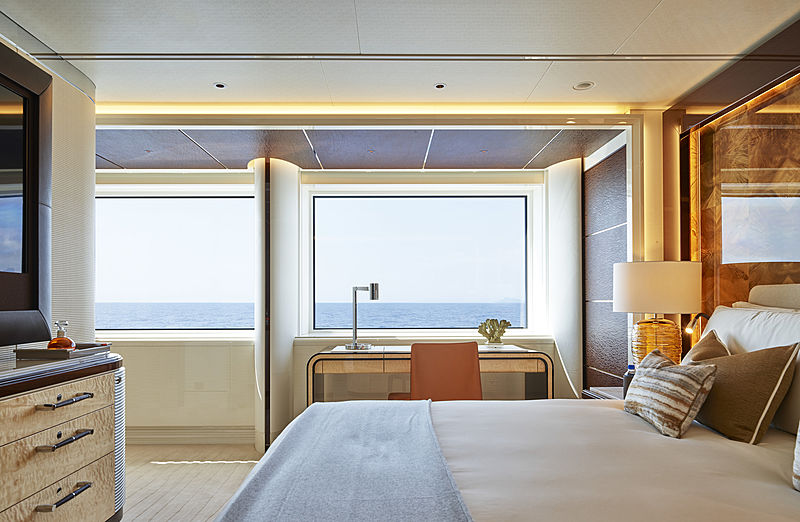 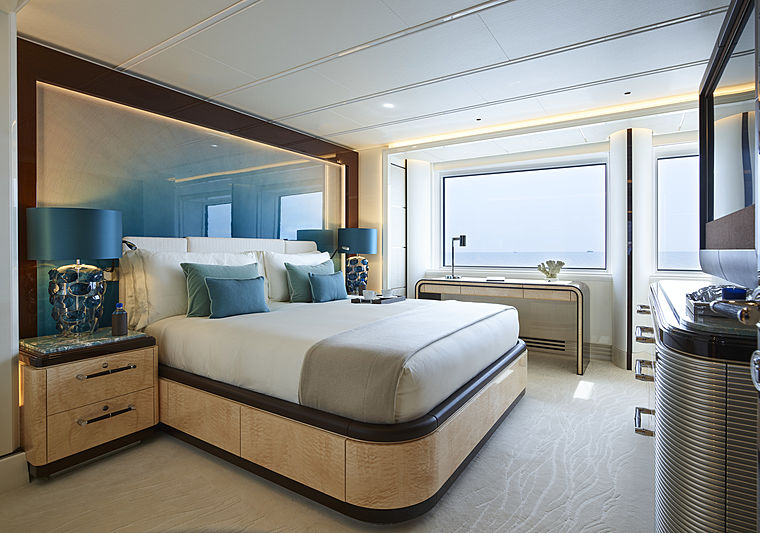 Photo: Michal BaginskiTo mimic the emblems on the front of a car, the cabinets have specially-designed handles, whereas the black-and-white concentric circles on the saloon floor and ceiling recall the white-wall tires of a 50s classic. The furniture louvers in each of the seven staterooms are designed to look like the grille of a car hood, and the dayheads on the main deck are inspired by the Bugatti Royale and Ferrari Daytona Spyder. Aside from a few minor identical features in each, every stateroom has its own character and statement headboards. The owner’s love of texture and pattern is well presented in these areas and overall there are more than 30 different marbles on board, with the predominant type being immaculate golden onyx as showcased in the VIP bathroom. 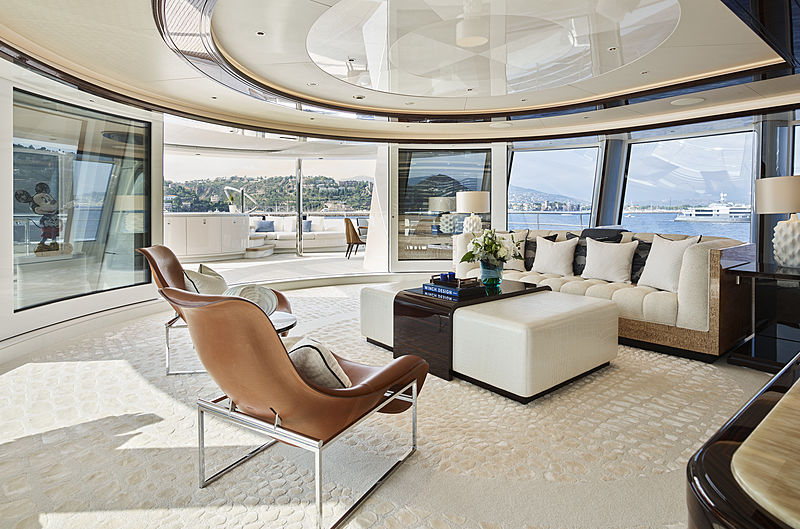 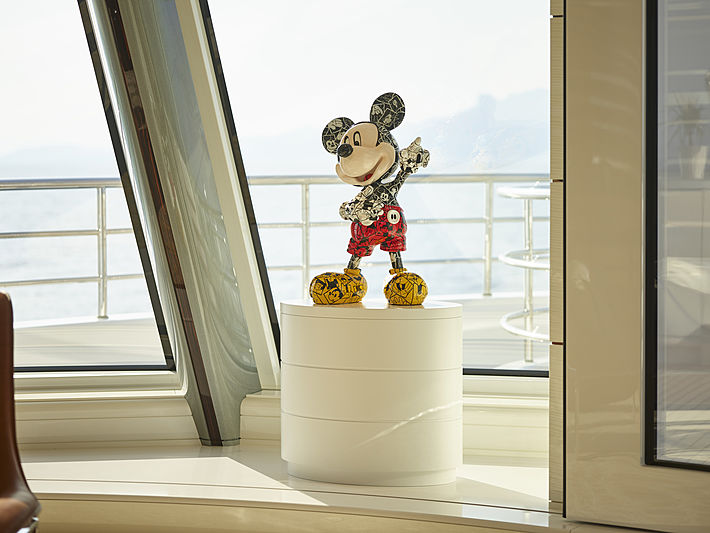 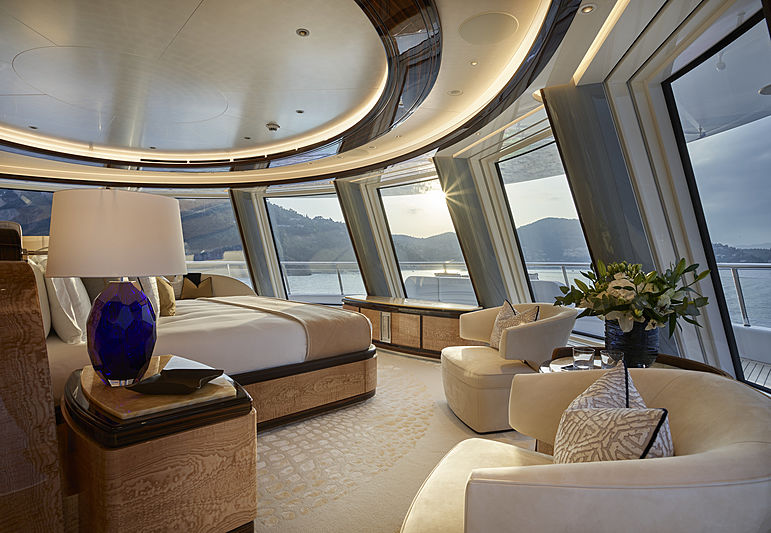 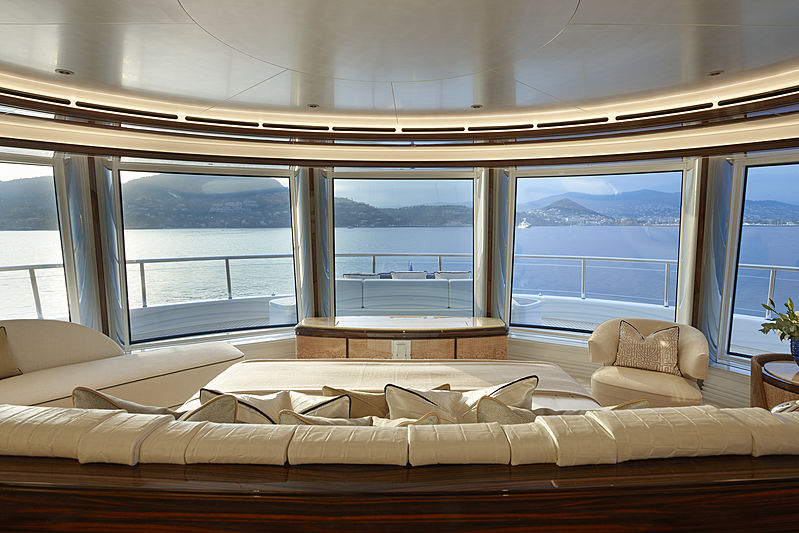 Photo: Michal BaginskiInitially, the owner wanted a very colourful palette throughout, but then reverted back to a palette of coffee and cream tones with added accents of colour. Every public space showcases many marbles, precious woods and leathers, with the owner’s deck decorated with cream wool carpet underfoot in the master bedroom inspired by crocodile skin, Macassar ebony panelling and crocodile skin frosting on the doors to the large showers. 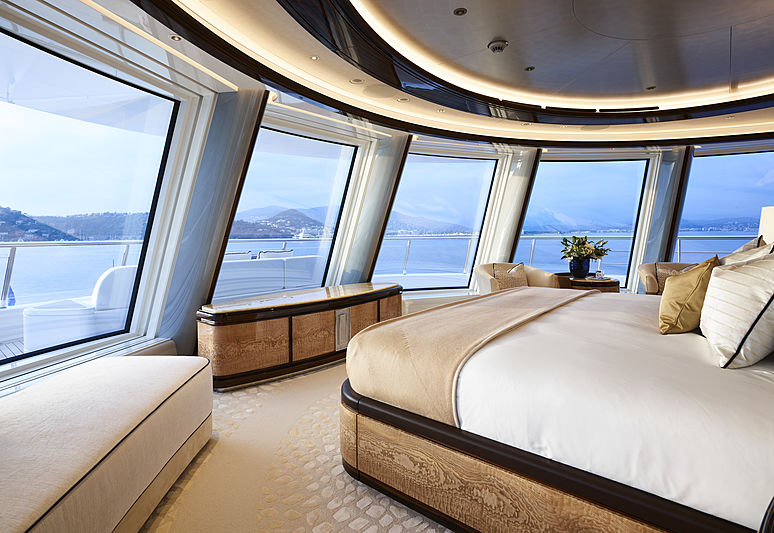 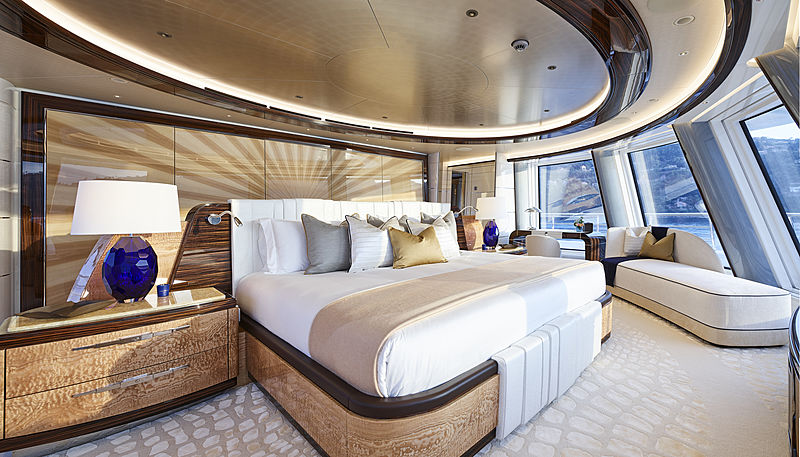 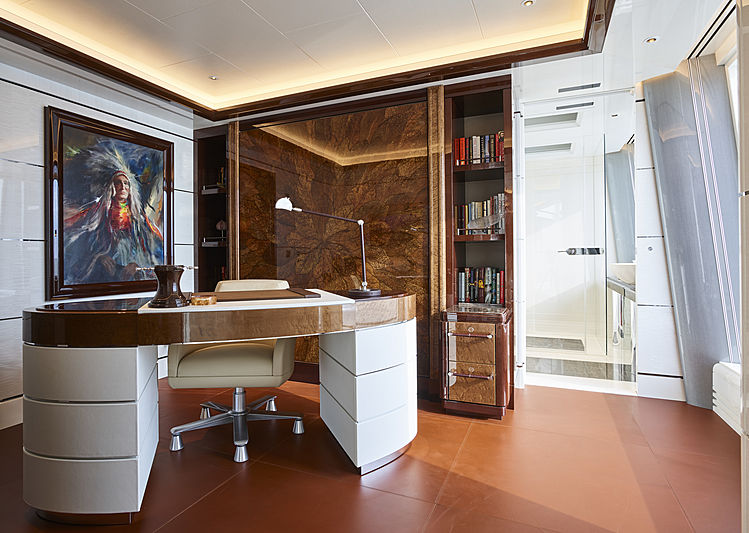 Photo: Michal BaginskiThe owner also has access to a dedicated library-cum-office space, and the choice of silver leather pressed with tobacco leaves adorns the walls alongside birdseye maple wood, cappuccino marble and tan leather tiles for flooring. In another level of textural detail, the length of the main deck corridor has been designed to mimic the grain of the bleached white sycamore and leads to the main deck spa, which is created from hemlock and teakwood stone from Paonazzo. From here, guests can enjoy the views out of the large windows in the sauna. 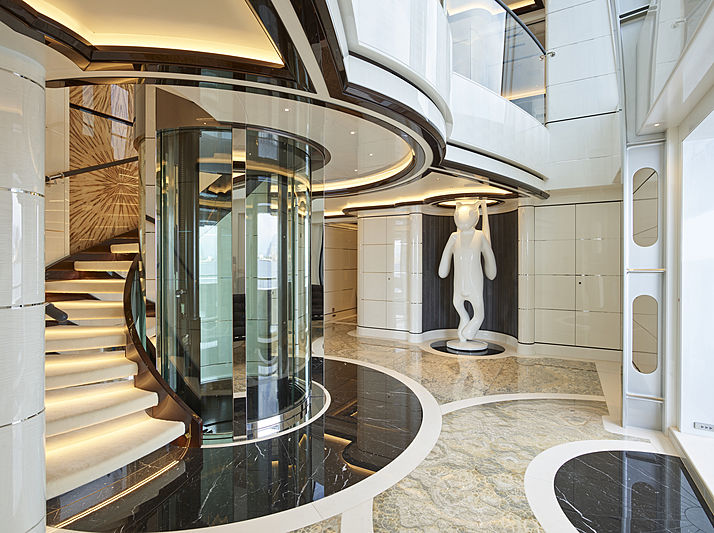 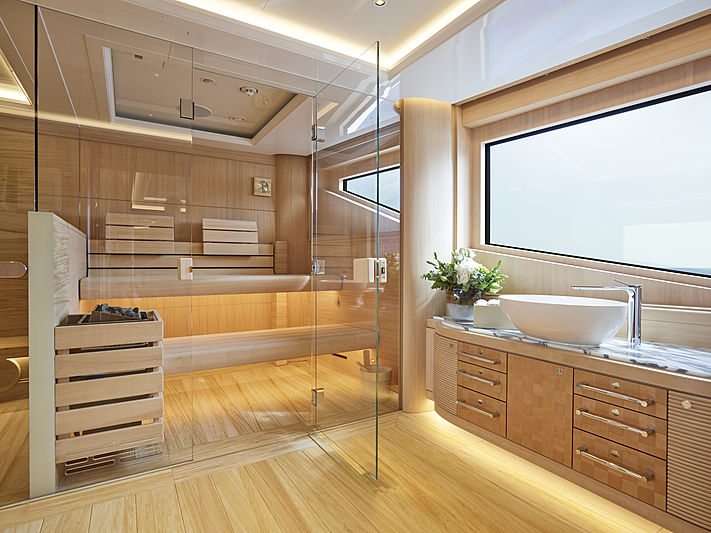 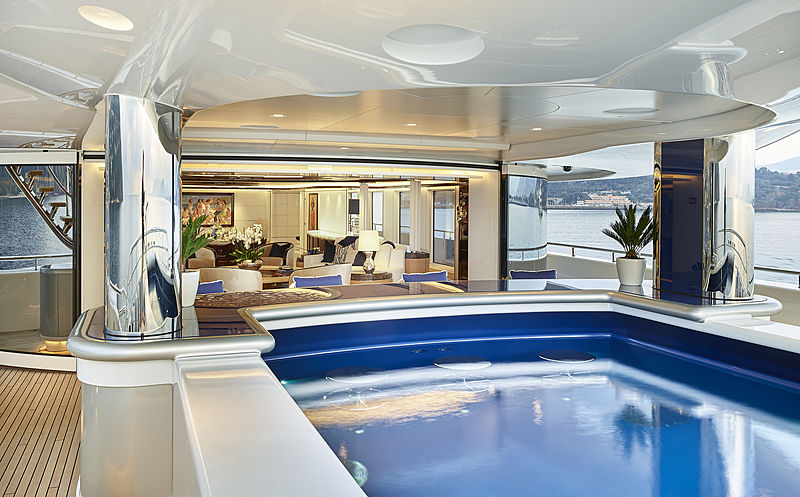 Photo: Michal BaginskiThe 14 overnight guests onboard Excellence can spend their time making use of the luxuries such as a large counter-current swimming pool on the main deck aft, jacuzzi on the owner’s deck aft and the nine-seat cinema. As well as the diving gear, Seabobs and RS200 sailing dinghy, the large water-level tender garage houses the yacht’s limousine tenders and is fitted out with an informal bar area. The 2,115 GT futuristic superyacht is powered by twin MTU 12V 4000 M65R diesel engines and can cruise at 14 knots or a maximum of 17 knots.

In Focus: Abeking yacht Excellence in action on North Sea