Launched in May 2019, the 31.2-metre yacht Vanadis features both interior and exterior design by Guido de Groot and naval architecture by the Dutch studio, Ginton Naval Architects. Builder CCN has recently released new imagery of the superyacht, providing a close-up look at the yacht’s custom interior styling. 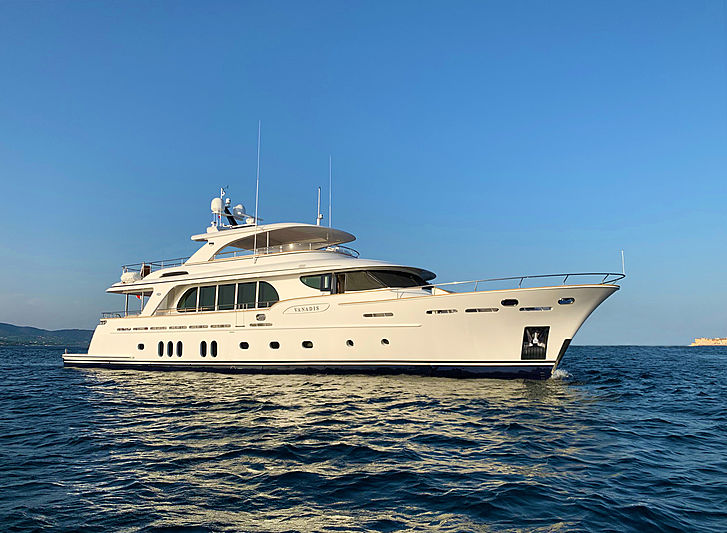 Photo: Cerri Cantieri NavaliVanadis is the fourth model in CCN’s Fuoriserie range and is named after a goddess of Norse mythology associated with war, death, love, beauty, fertility and gold. Inside, designer Guido de Groot has applied a classical and elegant style, which he describes as: “fully customised to the owner’s needs and wishes, resulting in a highly functional, comfortable, stylish and sophisticated design”. 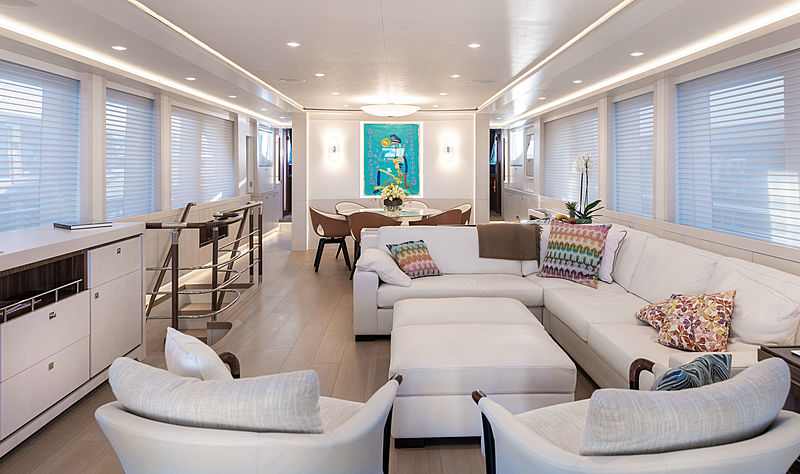 Photo: Cerri Cantieri NavaliSurrounded by large glazed windows and decorated in light shades with bleached ash and walnut, the interior layout sees the master and two guest staterooms located on the lower deck nearby the saloon and dining area that both feature a custom-made selection of furniture. 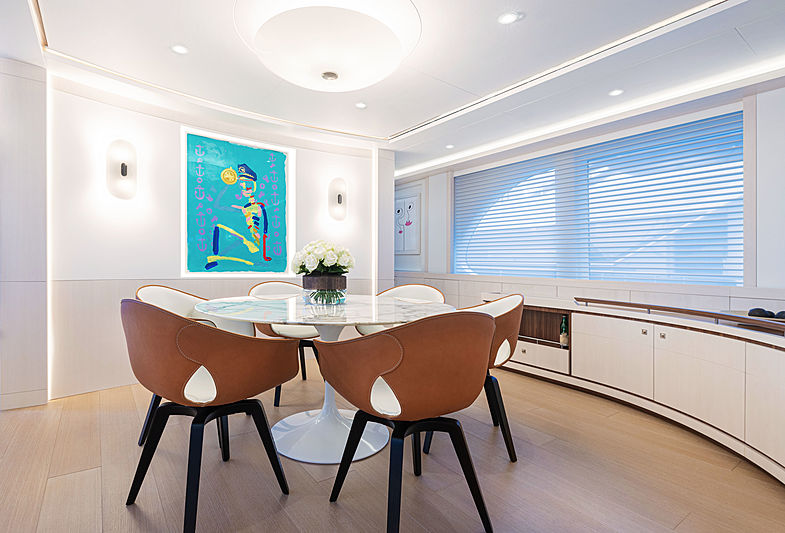 Photo: Cerri Cantieri NavaliAs part of the brief, the owner requested that special attention was paid to onboard safety and so numerous handles have been built-in throughout the interior structures and furniture, particularly along the hall and in the master stateroom. 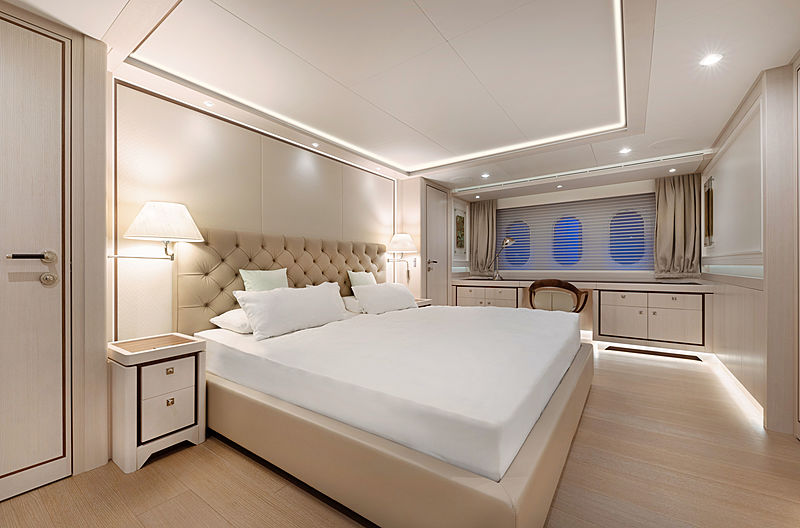 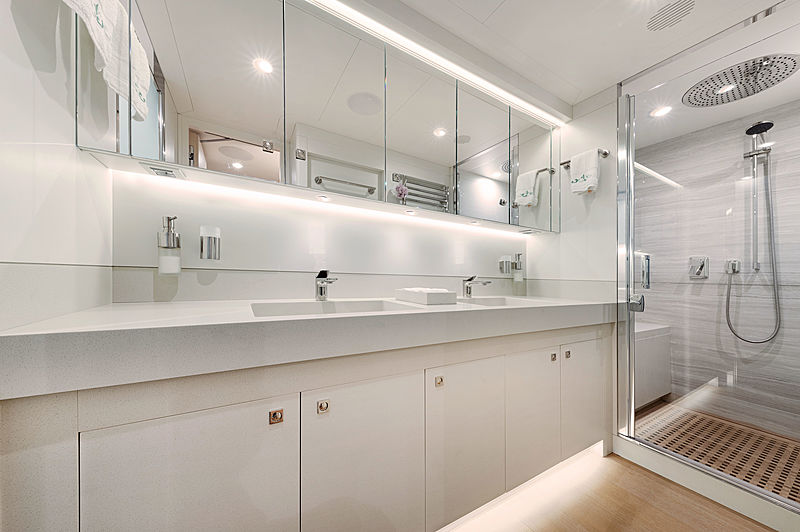 Photo: Cerri Cantieri NavaliOutside, on the main deck, two lounge areas can be found both astern and at the bow. Guests also have the option to lounge on the flybridge and make use of the sun loungers, bar and dining area, and enjoy the aft swimming platform, which hosts a 5.5-metre tender. 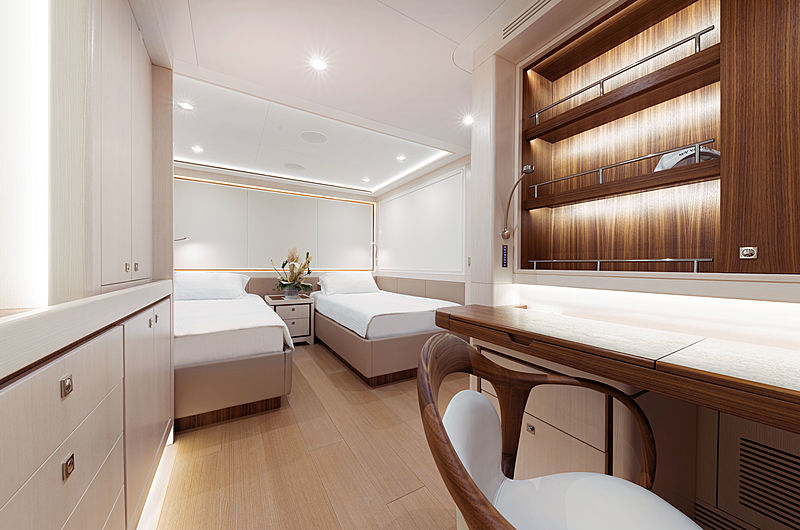 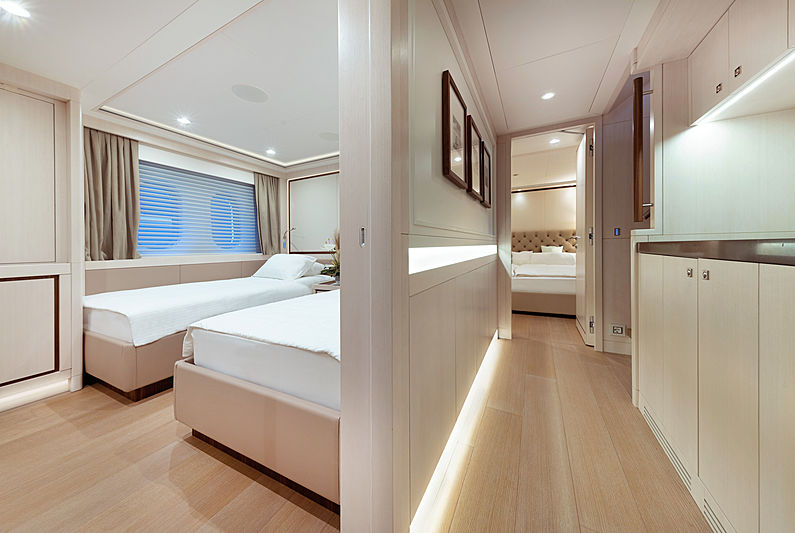 Photo: Cerri Cantieri NavaliBuilt as the first Italian yacht to meet the specifications of Lloyd’s Register’s Hybrid Power certification, Vanadis sports onboard technological solutions by Siemens and Schottel and a set of AKASOL lithium-ion batteries (175 kWh).

The batteries power the majority of the onboard utilities, allowing the yacht to remain at anchor at zero emissions for up to 17 consecutive hours and to cruise freely at limited speed for up to 180 minutes. Thanks to the yacht’s hybrid configuration, slender bow and shallow stern, the main engine compartment is located at the stern and the genset compartment at the bow, effectively freeing up available volume for the yacht’s guests and crew.