South African based Southern Wind shipyard is working actively to ultimate the outfitting of Grande Orazio, hull number 2 of the new SW82 mini-series. Just three months ago the delivery of the first hull Feelin’ Good was announced and the yacht has arrived in Genoa a couple of weeks ago after a challenging maiden voyage from Cape Town. 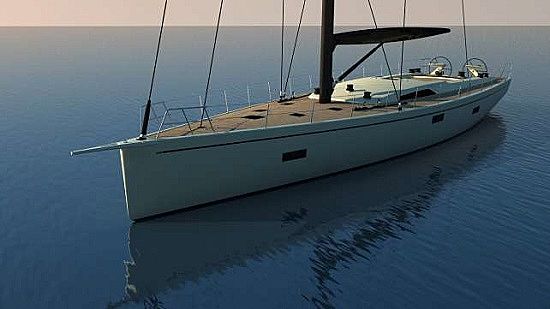 SW82 #2 Grande Orazio is conceived to achieve owner’s expectations to have a yacht capable to deliver thrilling performance on the most important offshore regatta fields and comfortable family vacations. The deck layout chosen for this project is the Flush Deck version with sleek and sporty coach-roof geometries.

As her Owner is a passionate racer, she has a strong focus on performance, featuring high racing-oriented deck and rigging solutions such as high modulus Southern Spars carbon mast and boom, EC6 + carbon rigging, carbon foil for furler, racing winches, racing removable bow sprit and a keel with deeper draft (4,20 m vs 4m)

For what concerns the interior layout, it has been strongly customized in order to be as flexible as possible offering ample volumes which may have different uses according to how the yacht is employed: cruising with family and short crew or racing with professional crew and friends.

In cruising mode, the volumes are distributed into an ample owner-quarter afore the saloon, which includes a private studio. In addition to this, the yacht offers four cabins, one or two of which to be devoted to crew.